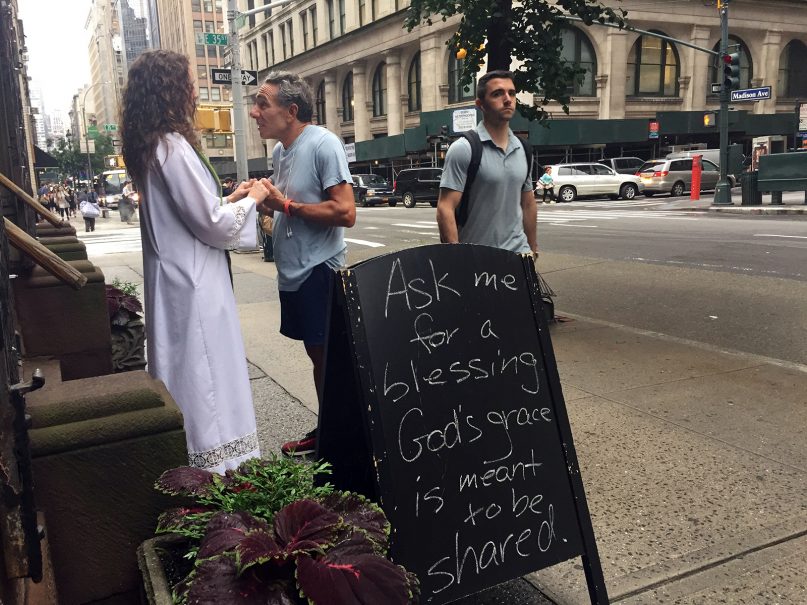 NEW YORK (RNS) — Russell Lupis stopped mid-jog when he saw the Rev. Adrian Dannhauser standing outside her Madison Avenue church with her “Ask Me For a Blessing” sign.

As she finished blessing someone else, Lupis stepped forward for a short conversation.

There was something on his mind — a tiff with his sister over their parents’ gravesite.

Dannhauser listened intently. Then she locked hands with Lupis, closed her eyes and prayed. She ended by making the sign of the cross on his forehead.

Lupis is not a member of Dannhauser’s Church of the Incarnation, where she serves as associate rector. He’s not even an Episcopalian. But he welcomed the chance to receive a blessing.

“She’s worth waiting for,” said Lupis, who has received her blessings before. “People like that have an even closer connection than the norm.”

Dannhauser has been offering blessings outside her church every Tuesday morning for the past three years, part of her outside-the-box ministry to passersby. She knows most of the people she blesses will never enter the 155-year-old Episcopal sanctuary in the Murray Hill neighborhood — let alone sign up for membership.

A former lawyer who worked in bankruptcy and financial restructuring, Dannhauser understands as well as anyone the precarious financial straits many churches find themselves in. Fewer people are attending church and many of the strategies designed to attract them aren’t working. 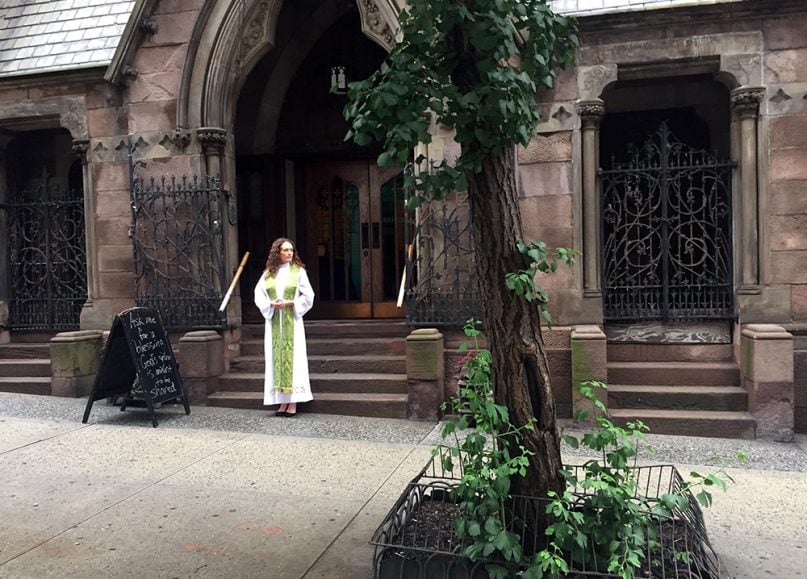 The Rev. Adrian Dannhauser stands outside Church of the Incarnation in New York City to offer a blessing to any interested individuals on June 25, 2019. Dannhauser offers blessings outside her church every Tuesday morning. RNS photo by Yonat Shimron

Those missing from church pews include millennials (born between 1981 and 1996) as well as older Christians who might once have reliably attended mainline Protestant churches, but no longer feel any social or individual obligation to go.

Dannhauser’s own church is an example.

The neo-Gothic landmark was once home to a prominent and sizable congregation. It was the site of Eleanor Roosevelt’s confirmation. Years later, members built a ramp to accommodate her polio-stricken husband, President Franklin D. Roosevelt, who arrived to attend his mother’s funeral.

Today it attracts 120 people on Sunday and relies on an endowment to meet expenses.

While Incarnation is financially healthy, surveys paint a dire picture for many mainline congregations.

But though people may no longer attend church as much as they used to, their spiritual longings remain, and Dannhauser wants to show them what she calls “a public witness to the healing, saving grace of God.” 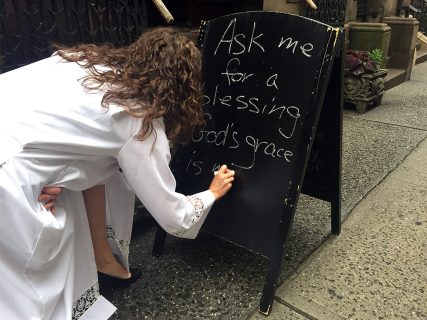 The Rev. Adrian Dannhauser writes a message in chalk outside the Church of the Incarnation in New York City on June 25, 2019. RNS photo by Yonat Shimron

The Rev. Matt Heyd, rector of Episcopal Church of the Heavenly Rest in upper Manhattan, said Dannhauser has been at the forefront of a slow shift in the Episcopal Church — and among other denominations —  away from a focus with growing congregations to simply sharing the message about God.

“When you do that with joy and a sense of abundance, it does form community, but that’s not the first goal,” he said. “We’re not trying to fill committee spots. It’s first of all a proclamation of love. ”

Dannhauser, a Mississippi native who grew up Southern Baptist, has always found spirituality in unconventional ways.

As a girl, she attended Ballet Magnificat!, a Jackson-based professional Christian ballet company. Dancing became a spiritual discipline for her. So too did speaking in tongues, a phenomenon in which people talk in words that have no known meaning.

“Speaking in tongues came through the ballet,” she said. “It was this understanding of the Holy Spirit. When I want to pray for something but don’t have the words, it accompanies that intention.”

After law school at Vanderbilt University, she took a job in New York City and with her boyfriend — now husband —  began attending a nondenominational church in Times Square.

But the consecration of Gene Robinson, an openly gay man, as bishop in the Episcopal Church back in 2003 “blew my mind,” she said.

“I just thought that the most amazing good news I had ever heard — that you could be gay and a Christian and not be sinning.”

She switched to Trinity Church Wall Street, an Episcopal church near her law firm, and before long took a class at the General Theological Seminary in the Chelsea neighborhood. 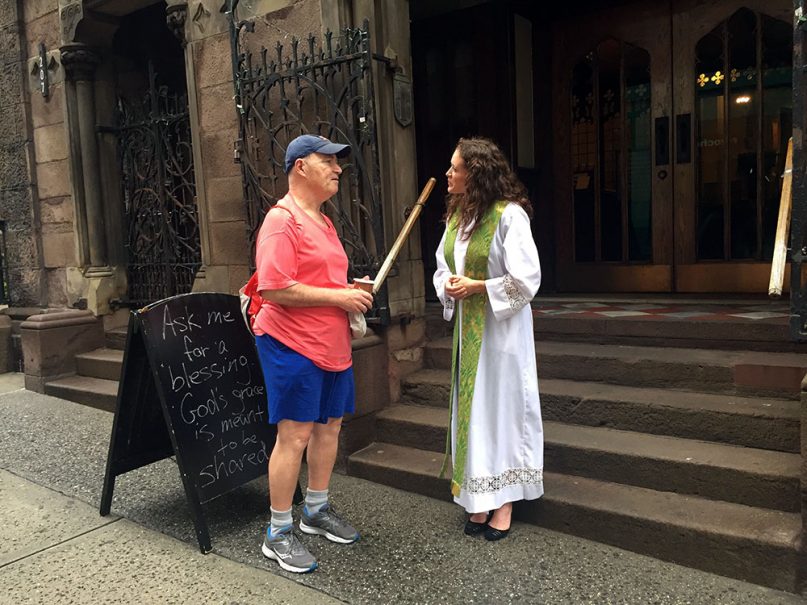 A passerby stops to chat with the Rev. Adrian Dannhauser outside Church of the Incarnation in New York City. Dannhauser is outside her church every Tuesday morning. RNS photo by Yonat Shimron

Dannhauser was considered too evangelical for some in the Episcopal Church. The New York Diocese’s commission on ministry turned down her candidacy for ordination.

But the bishop overruled the committee and she headed off to the Berkley Divinity School at Yale.

There, her unconventional ministry gifts began taking shape. She helped form the Episcopal Evangelism Network and with another seminarian began praying for people on the streets of Stamford, Conn.

As a priest, she has taken part in “Ashes to Go,” in which priests impose ashes on the foreheads of passing commuters on Ash Wednesday.

And for years she has been working to raise awareness of human trafficking, leading public prayers at the Port Authority bus terminal in Manhattan and educating hotel staff in how to spot victims. She chairs the Episcopal Diocese of New York’s Task Force Against Human Trafficking.

More recently, she decided to try her hand at open mic night on the Lower East Side of Manhattan.

She told a story about an adventure she and her husband had in Rwanda during a trek up a mountain to see some gorillas in their habitat. When one of those gorillas appeared to come charging after her, she described the impulse to pray— an impulse, she said, that was not just about survival, but compassion and empathy.

Her calling, as she sees it, is to minister in the marketplace, to preach in the public square. Unlike the street preachers who screech about sin and damnation, Dannhauser wants to tell people about God’s love.

“I’m just trying to help nurture whatever journey people are on,” she said. “There’s nothing better than talking about God. I want to do it all the time.”