(RNS) — This past May, the Indian nation reelected Narendra Modi, the head of the Bharatiya Janata Party, for a second five-year term as prime minister of the world’s largest democracy. BJP, a right-wing Hindu nationalist group that has transformed itself into a national political force, has long marginalized minority communities in India.

As with the rise of President Trump in the United States, some have enthusiastically bought into Modi’s Hindutva ideology, while others have been vocally opposed to it, and the debate has reverberations far beyond the borders of India.

Among South Asian Americans, progressive Hindu voices have been relatively quieter than those influenced by right-wing nationalism, and one woman in particular wants to change that. Before Modi began his first term, Sunita Viswanath, an activist based in Brooklyn, New York, had founded Sadhana in 2011 to help cultivate the progressive Hindu community — and in doing so, to counter those who she believes are co-opting Hinduism for political gain.

I spoke with Sunita recently about Modi’s re-election and why the idea of progressive Hinduism feels so urgent in our current climate. This interview has been edited for length and clarity.

What has been the reaction of progressive Hindu Americans to Modi’s re-election? And how have you found yourself responding?

There seem to be no Indian cultural spaces left in the United States where one can express dissent about Modi and the BJP. The Hindutva ideology reigns supreme in so many family and community settings, especially in Indian temple communities.

In the last couple of months since the Indian elections, despondency is giving way to meetings among activists to re-strategize. In the Indian and Indian American context, I feel strongly that left and secular spaces must be more open and welcoming to faith-based folks, especially Hindus. I also think we all need to develop the skills and gather the tools to have constructive dialogue with those who we disagree with. 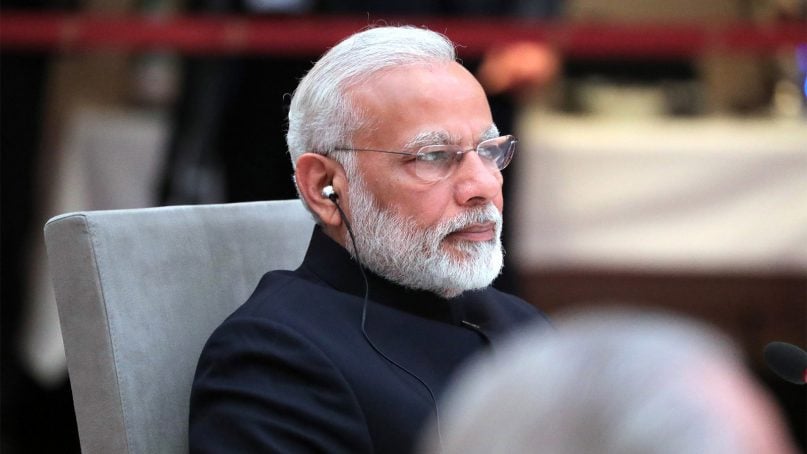 Indian Prime Minister Narendra Modi at a meeting in Hamburg, Germany, on July 7, 2017. Photo courtesy of the Kremlin

How has your organization fared as Hindu nationalism has asserted itself?

For eight years, Sadhana has faced attacks from conservative Hindus who see us as anti-Hindu, fake Hindu, traitors, etcetera. What’s more, we have been unwelcome in many progressive spaces because we identify as Hindu and are therefore seen as perpetuating caste and casteism. If a progressive group like Sadhana, which explicitly stands against caste, faces such opposition from all sides, imagine the plight of a regular Hindu individual who simply wants to add his or her opposition — as a Hindu — to the violence taking place in the name of Hinduism.

I simply don’t accept that Hindu people don’t care, aren’t stirred within their core by the atrocities (including mob violence against low-caste and non-Hindu Indians). I believe that as Hindus, we have a special role to play when Hindus are perpetrators of hatred and violence. Sadhana will continue to work within Hindu communities to implore and inspire them to connect their faith to justice for all, to oppose every instance of bigotry and violence no matter who is the victim and who is the perpetrator.

How do you reconcile the ideologies of Hindu nationalism with Hindu teachings? And do you see any parallels with how white supremacy is drawn from Christian traditions?

The ideology of Hindu nationalism is diametrically opposed to Hindu teachings. Hindutva is exclusive, whereas Hinduism teaches that we are all one. Hindutva is Islamophobic, whereas a Hindu believes that the divine resides equally and identically in a Hindu and a Muslim. Hindutva is violent, para-militaristic in fact, whereas Hinduism embraces ahimsa (non-violence and non-harm) as one of its core tenets.

Do you see any parallels with how white supremacy is drawn from Christian traditions?

I believe that one finds in any text, literary or scriptural, what one is seeking. In a sense, what we read is a mirror, and the way we interpret texts says a lot about who we are. It doesn’t surprise me that there are people who find hatred and violence in religious texts. So much carnage has taken place through history in the name of Christianity, Islam, Judaism, Hinduism, and these days, even Buddhism.

But it is also true that many justice movements through human history were spearheaded and led by those who found unconditional love in those same religions.

We are seeing violent extremist movements in all the major world religions. And I believe that peaceful, justice-seeking people within all the religious communities must come together in love and strength to counter these forces of hate.

How did you come to identify yourself as progressive Hindu?

I was born into a Hindu family and was raised with these liberal understandings of Hinduism:

First, we are all one. God is in all of us. There are not some who are higher and lower in God’s eyes.

Second, I must do my dharma with all my heart, what I was put on earth to do, and not worry about whether I succeed or fail. This is Krishna’s teaching in the Bhagavad Gita.

And third, there is no pure evil or pure good. There is good and evil in all of us. My mother taught me this explicitly every Diwali when she pointed out, “If Rama was purely good, he would not have made Sita walk through fire to prove her chastity. He would not have banished her. And if Ravana was pure evil, he would have violated and brutalized her.”

I was taught that the many wars and slayings in all the Hindu stories we are told are to be taken as metaphor for the work we have to do in our life to slay the demons within ourselves.

Until eight years ago, when I collaborated with a few like-minded progressive Hindus, I kept my spiritual journey private as I pursued my life’s work in social justice and human rights. We all felt there was the absence of Hindus who were willing to openly connect their faith to the urgent social justice struggles of our times. We were acutely aware that our Hindu communities lacked any discussions or participation in social justice work; and similarly, the social justice arenas where we were active did not have practicing Hindus. Hence the creation of Sadhana eight years ago.

What are some of the sources of Hindu tradition that you lean into most for your views? Are there certain texts, figures or stories that are especially meaningful to you?

The Bhagavad Gita is of central importance to me. I see it as a call to action.

What are some of the biggest challenges you see for progressive Hindus? And what do you see as the greatest opportunities for this growing movement?

Caste is the greatest challenge for Hindus to overcome, as it is the biggest atrocity of our legacy. Hindus (and non-Hindus who subscribe to the caste system), must reject not just caste discrimination, but the caste system itself. Annihilation of caste is our challenge as Hindus. We must rise to this challenge.

The fact that things seem to be getting worse means that more people will be waking up in angst, looking for solutions. Indeed, the biggest response we had from Hindu Americans was in the wake of the election of Donald Trump. And similarly, the largest response from Hindus in India who want to join Sadhana has been in these two months since the re-election of Modi. We will respond to the growing interest in Sadhana by continuing to build our progressive Hindu platform.

Religion Hub
What Americans can learn from other cultures about the language of gratitude
Follow us on Facebook!
Submit your photos to RNS