ST. LOUIS (RNS) — Most Americans under 35 think that abortion should be legal most of the time.

Andrew Martin is not one of them. Neither are his friends.

Two dozen of them, part of a group called “Biking for Babies,” spent the past few weeks biking more than 800 miles to raise money for crisis pregnancy centers and to meet with other abortion foes in the Midwest.

Martin, a 27-year-old data scientist, said he was fighting “against the common narrative that every young person, every millennial is secular, pro-choice.”

He and his fellow cycling missionaries support political efforts to restrict abortion. But they’re interested in something bigger: a transformed American culture in which women don’t even consider having an abortion.

Martin, who is from Virginia, and six other cyclists set out on their ride in Holly, Colorado, on the eastern edge of the state. From there, the seven riders spent a week on their bikes, averaging about 120 miles each day, on their trek to meet up with bikers from other states.

Other riders set out from Madison, Wisconsin; Columbus, Ohio; and Tylertown, Mississippi. In total, there were 20 males and three female riders.

Wearing blue and yellow Biking for Babies cycling jerseys and traveling mostly through red states, the 23 riders, the majority of them Catholic and college-age, said they often encountered people who support their mission.

“Pretty much everyone we met with was already pro-life,” said Martin.

Still, the riders know they are outliers.

A 2018 poll from the Public Religion Research Institute, a nonprofit research organization, found that nearly two-thirds of Americans ages 18 to 29 agree that abortion should be legal in most or all cases. And a June NPR/PBS NewsHour/Marist Poll found that 57% of American adults describe themselves as pro-choice, compared with 35% who describe themselves as pro-life. 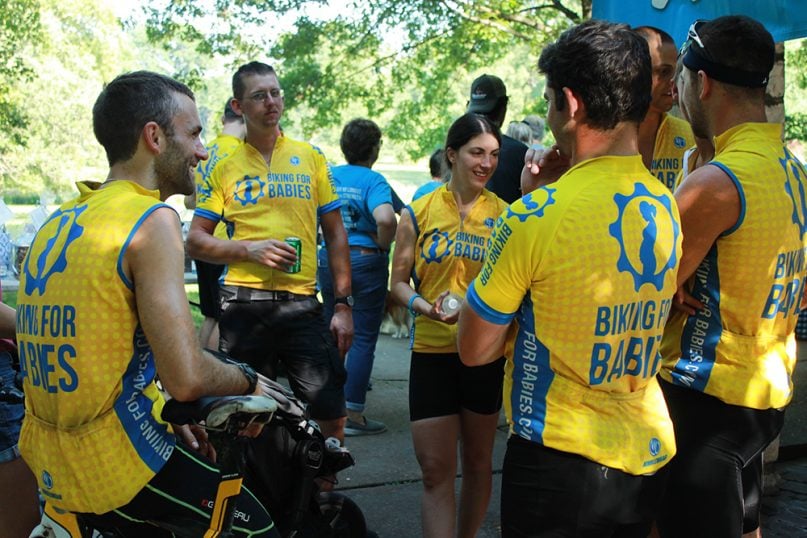 Cyclists and abortion opponents, including Jimmy Becker, from left, Rafal Szymanski and Aleece Duggan, commiserate after their ride on July 13, 2019, at Tower Grove Park in St. Louis. RNS photo by Eric Berger

During the ride, Martin and his teammates woke up at 5 a.m. each day to try to get out the door before sunrise, rode 40 miles, had a midmorning break, rode another 30, had lunch and then just tried to “power through the afternoon with as many breaks as needed.”

He said he enjoys cycling because “it’s just a good way to see so much of the outdoors.”

“It’s faster than running but more detailed than driving,” he said.

Some nights they would then go to Mass and have dinner with members of the community.

“The host families were incredible every night,” said Martin, whose father is the programming director of a Catholic radio station in Decatur, Illinois. Martin planned to talk about the ride on “Cradle & the Convert,” a radio show hosted by two former police officers.

Beth Simpson, an obstetrics nurse, thinks the young cyclists are part of a “pro-life generation that I think is going to get abortion eradicated.”

She drove five hours from Epworth, Iowa, to cheer on her son Jonathan, who was participating in the ride for the fourth time. She was among more than 50 people waiting at Tower Grove under a blazing hot sun and temperatures in the mid-90s.

A guitarist played ’90s hits from the Goo Goo Dolls and 3 Doors Down while volunteers prepared a buffet for riders.

Simpson and her son spent eight years protesting outside a Planned Parenthood clinic in Dubuque, Iowa, that closed in 2016.

She hopes that one in St. Louis — the last abortion clinic in Missouri — soon faces the same fate. (The Missouri Administrative Hearing Commission recently ruled that the clinic could continue performing abortions after the state tried to stop the procedures over what an agency said were concerns about patient safety.)

Nine states have passed laws this year to ban abortion at various stages. In Missouri, for example, the state approved a law that bans abortion after eight weeks, with no exceptions for pregnancies that are the result of rape or incest. In Alabama, the state banned abortion in all cases except if the woman’s life is threatened. The laws face legal challenges, which could reach the conservative-majority Supreme Court; they not yet been put into effect.

Nikki Biese, executive director of Biking for Babies, acknowledged that the group is happy to see the new abortion restrictions but emphasized that the nonprofit is not a political organization.

“We’re here to say that the right to life is not something to be politicized and although it takes longer, we want to change the culture. We don’t believe that it’s a right that you have to kill your child and get an abortion, and we don’t want anyone to believe that that is something they need to do,” said Biese, a Catholic, 28-year-old mother of four who lives in Madison, Wisconsin.

The nonprofit aims to raise $150,000 through this year’s ride; the group raised $82,000 last year, which helped fund 33 crisis pregnancy centers.

There are some 2,000 such centers affiliated with evangelical Christian groups and 240 Catholic centers around the United States, according to The Associated Press. Most do not have doctors on staff; instead, staffers offer pregnancy tests and aim to counsel women out of having an abortion while providing them information about adoption.

Nick Vande Hey, a senior at St. Norbert College in De Pere, Wisconsin, who was taking part in his second Bikers for Babies journey, said that he supported the cause.

He also enjoyed the ride.

“One of the highlights of the ride is always just the camaraderie of the team,” said Vande Hey. “When you are suffering together, it really brings the team close. We sing a lot of songs. We joke around.”