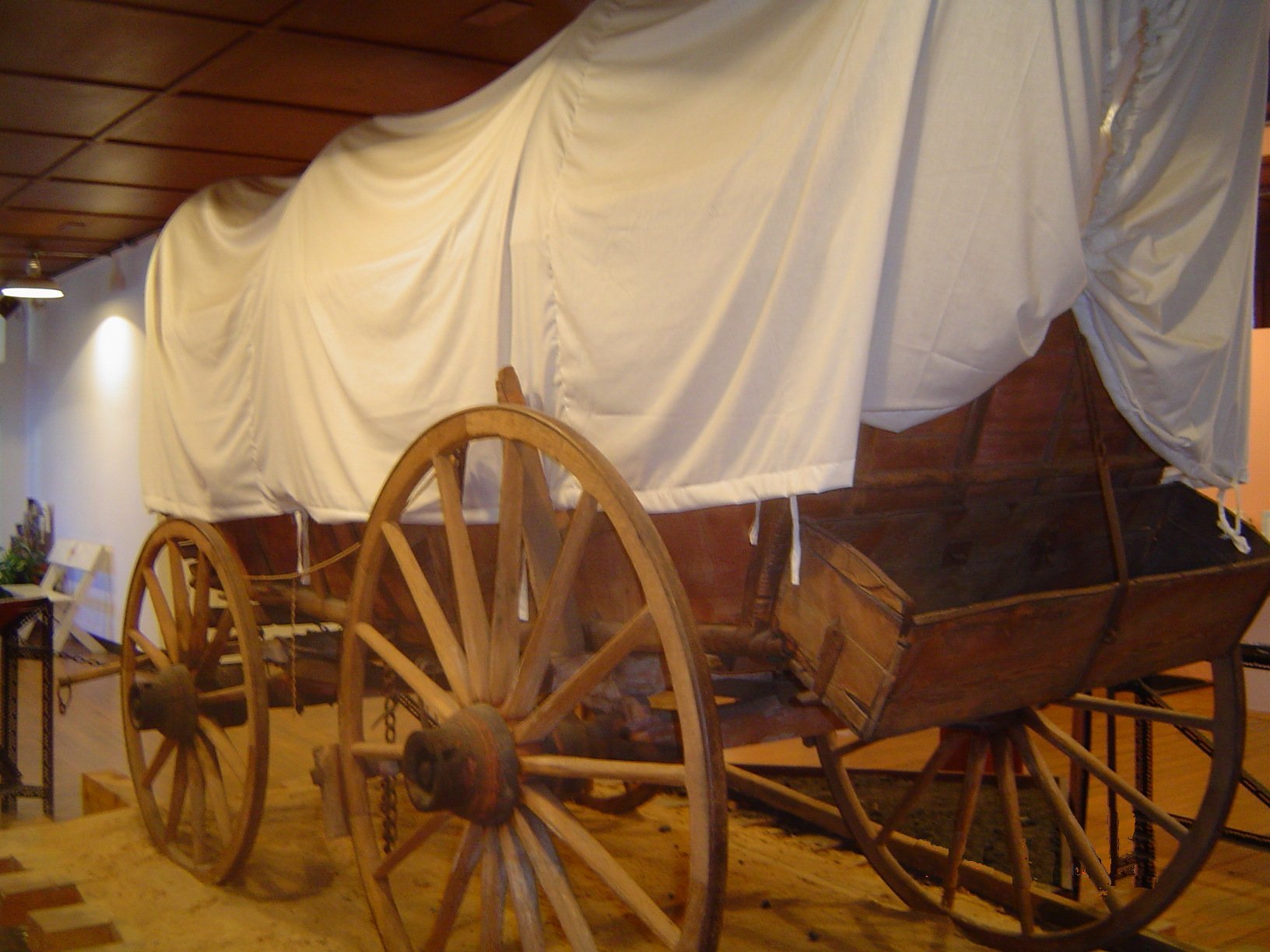 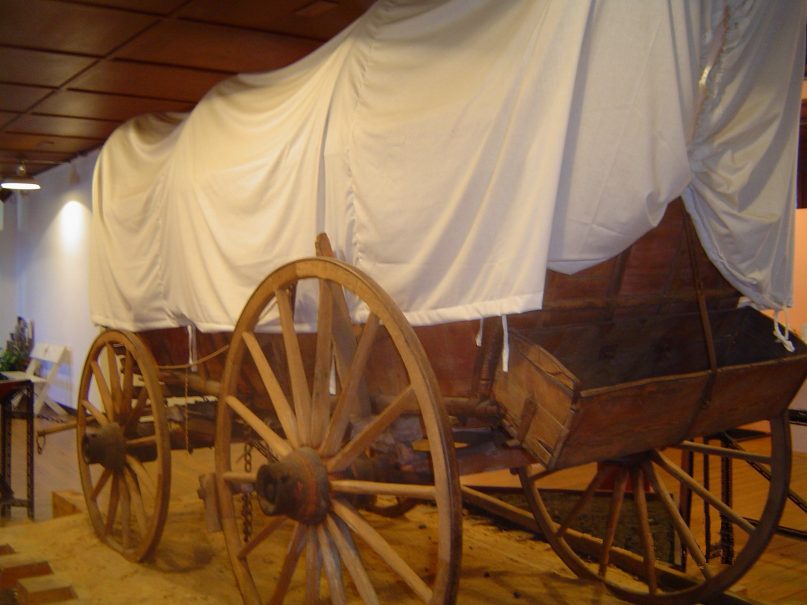 It’s that time of year again, when Latter-day Saints remember—and remember, and remember—the brave pioneers who settled the Salt Lake Valley in July of 1847.

In Utah, Pioneer Day is a state holiday that sounds like a second chance at celebrating the Fourth of July, with fireworks, parades, and outdoor barbecues. (Apparently Jell-O is involved. Even though it was not a delicacy the pioneers enjoyed, it’s now the official state snack food of Utah, so it has become “statriotic” ex post facto.)

I’ve never been in Utah on Pioneer Day myself. Here in Ohio and in other places I’ve lived, Pioneer Day is more church-centered—we sing “Come, Come Ye Saints” in a sacrament meeting and discuss the pioneers’ sacrifices for religious freedom.

We also send our teenagers out on “trek,” a re-enactment experience that has become popular in recent decades. The idea is to give youth several hours or even days of hellish outdoor living conditions so they’ll learn to appreciate how their ancestors managed to survive without cell phones. In June, one of these groups in Utah made national news because the participants got so dehydrated. The dehydration, at least, is historically accurate. Welcome to pioneer living, kids.

Although “trek” is of recent vintage, what folks do now to honor the pioneers is low-key compared to how omnipresent the pioneer story was a few generations ago. To my delight I was recently given a couple of Mormon cookbooks from the 1960s and 1970s, with cover art featuring white women in vague nineteenth-century dress preparing food before an open hearth. Each woman is assisted by precisely one girl, presumably a daughter, to whom she will impart the family’s culinary heritage. There are no sister wives in sight. 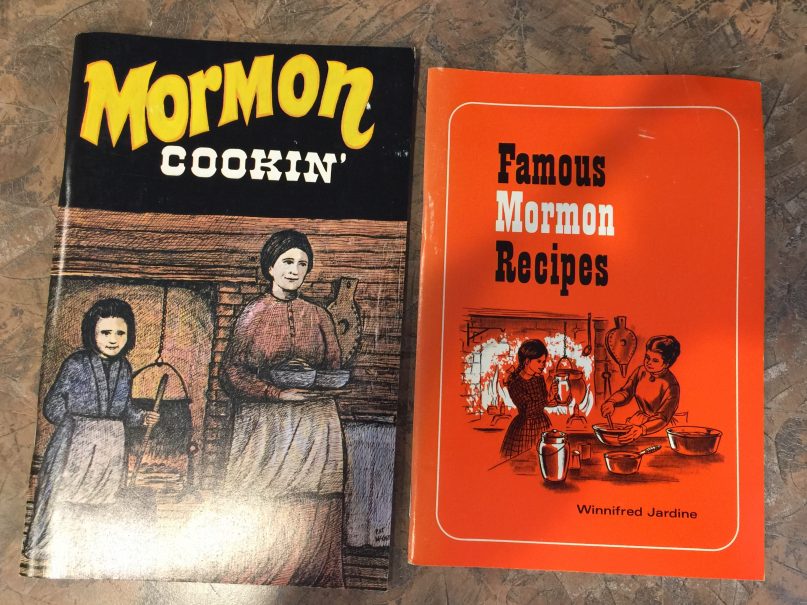 The first thing to strike me as interesting was how much heavy cream there was; no vegetable was safe from it. (See recipe for “Pioneer Lettuce Salad” at the end of this column.) But after my arteries recovered from that shock, the second thing I noticed was that the pioneers were on nearly every page: Brigham’s Buttermilk Biscuits, Mormon Johnnycake, pioneer candies, a pie crust recipe someone carried across the plains.

What’s more, the pre-recipe text did not include hot tips for the very best prep techniques, à la America’s Test Kitchen, but stories. Pioneer stories. These wheat cakes were from wheat that “was of a courser texture than made nowadays.” (Translation: Oh, how those pioneers suffered!) Chicken and dumplings were a treat as early as the late 1840s: “How good that fragrant chicken, bubbling in a heavy black iron kettle over the open fire, must have smelled to people who had been so intimate with hunger and want.” (Translation: But they were thankful for what they had!)

As a convert, I have no Mormon pioneer ancestors of my own, but I’ve discovered two nineteenth-century women I will say are Mormon-adjacent, and their stories have given me strength. One was an early emigrant to California whose path briefly crossed with the Latter-day Saints in 1846. She wrote in her later memoir:

“It was while making our way to St. Joseph that we met hundreds of Mormons, who had recently been driven out of Nauvoo. I got acquainted with a Mormon woman, and asked her many questions. I found her just like other women. She had two children: one of them was sick, and we talked over things just as if she had been one of my own people.

She told me that Brigham Young was a great and good man, even more than a man, because he had his instructions directly from God, that he was going to found a Kingdom for the Saints where all would be good and happy. I liked her very much, and from what she told me I was not so afraid of having trouble with the Mormons as the men were.”

That ancestor did not join the Church, but she made a human connection, one she remembered with fondness many years later.

The second story did not end so happily. It turns out that my second great-grandmother, a Protestant in Missouri, had another husband we never knew about until recently. (Thanks, Ancestry.com!) When she was just fifteen years old, she wed a Mormon young man named Isaiah. There’s no record of this marriage in my own family’s history, where it seems to have been politely expunged, but Isaiah recorded it in his.

In his memoir many decades (and many wives) later, he remembered my foremother as his “angel”—the childhood sweetheart, the one who got away. But it wasn’t a happy union. She refused to follow him west and apparently “never accepted the principles of Mormonism,” which I take as meaning, among other things, that she did not accept “the Principle” with a capital P: polygamy.

Isaiah left for Utah without her. In his absence, she gave birth to a baby, but the infant died; Isaiah tried to reconcile with her the following year but was rebuffed. She wrote him out of her history, married my staunch German Protestant ancestor, and had seven more children.

I love it that I have a Riess ancestor who secretly stood up to polygamy and asserted her rights. I also love it that on my mother’s side, I have an ancestor who was open-minded enough to listen to a “Mormon” woman without prejudice, “just as if she had been one of my own people.” Both of these women teach me something.

And that’s what pioneer heritage is really about, isn’t it? It’s about inhabiting, and learning from, the stories of those who came before us.

As the Church of Jesus Christ of Latter-day Saints has expanded internationally and come to embrace  members beyond the predominantly British and Scandinavian immigrants who were its backbone in the early days, the pioneer narrative has expanded too. We’re remembering that Jane Manning James, an African American LDS convert, was among the 1847 companies. And we’re more mindful that brand-new members of the Church, wherever they live in the world, are pioneers too, often making brave sacrifices to live their chosen religion.

In this way, both culturally and individually, we take from the pioneer narrative what we need in order to do what all pioneers do: Carry on. Be brave. Call upon reserves of faith you didn’t know you had. And always, always remember where you have been.

Cut the unsuspecting lettuce into wedges or shred. Whip the cream, then blend it with vinegar, salt, and sugar into a dressing. Drown the lettuce with the dressing until said lettuce is no longer recognizable as a vegetable. Serves six would-be pioneers.