BANGALORE, India (RNS) — In the pre-dawn light, Srikara Sudarshana circumambulates the Gali Anjaneya Swami Temple at a busy intersection in this city in southern India, known as the country’s tech capital.

The 20-year-old priest chants Sanskrit mantras in front of a 700-year-old saffron-colored idol of the god Hanuman. According to ancient tradition the priest then bathes the deity, but instead of using water from the nearby Vrishabhavathi River, Sudarshana cleanses the idol with 30 liters of filtered water from the temple’s kitchen.

The temple, one of Bangalore’s historic treasures depicting scenes from the Indian epic Ramayana, is flanked by factories producing lead acid batteries and textiles. The Vrishabhavathi, choked with industrial waste, gives off a noxious odor.

“It’s no longer a river but a frothing mass of sewage discharged from industrial, agricultural and residential areas of the catchment,” said Sudarshana.

It wasn’t so long ago when the Vrishabhavathi’s waters were potable. According to local myth, the river originated from the hoof of a sacred bull at a hillock nearby. A tributary of one of the most important rivers in India, the Kaveri, it was a key artery and source of livelihood for Bangalore’s residents and farmers. 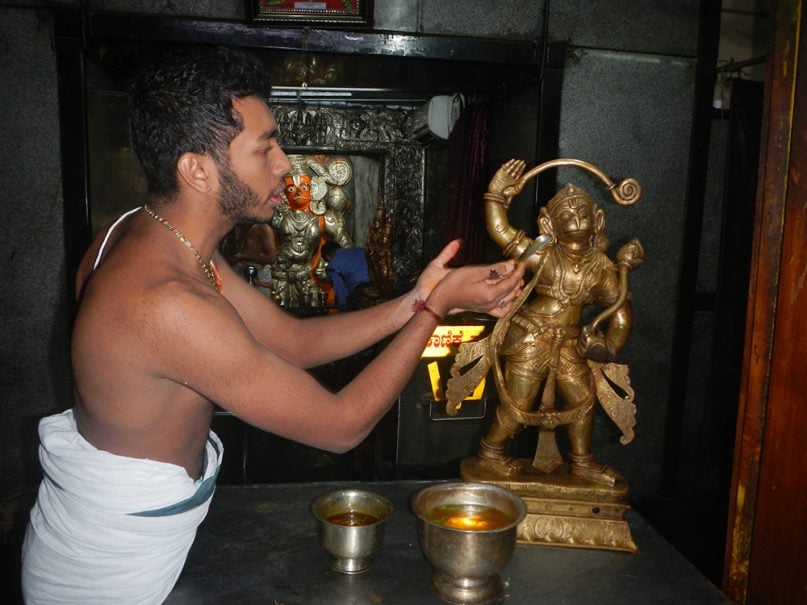 “The bull is believed to be the vehicle of Lord Shiva, the source of creation and destruction of the universe,” said Tulasi Srinivas, a professor of anthropology at Emerson College in Boston, who has been studying water scarcity in Bangalore over the past decade. “It is incumbent that out of this destruction we must find new ways of re-creating our ecology.”

When the Vrishabhavathi flowed past the Hanuman temple as a pristine river, devotees bathed before entering the temple complex holding pitchers of holy water.

“The water was so pure our forefathers could even drink it,” said Srinivasa Ramanuja, a senior priest wearing a single piece of unstitched cloth and girdle around his waist. “During the rains, it would enter the temple and caress the feet of lord Hanuman.”

But with the tech boom in Bangalore in the early 1990s, the city’s growth, fueled by successive governments’ ambitious agendas, outstripped its waste management plans.

Trees around catchment areas of lakes were cut down and aquifers were tapped to build out suburbs. As a result, the lakes dried up and the city government gave permits to private institutions to build on the lake bed.

In 2017, the World Economic Forum named Bangalore the world’s most dynamic city for its entrepreneurial spirit, innovation and technology, as well as its salubrious climate. But while paper mills, chemical and electroplating plants, textiles, distilleries, tanneries and rubber factories sprung up everywhere, attracting skilled workforces from around the world, they also discharged their effluents into the river. 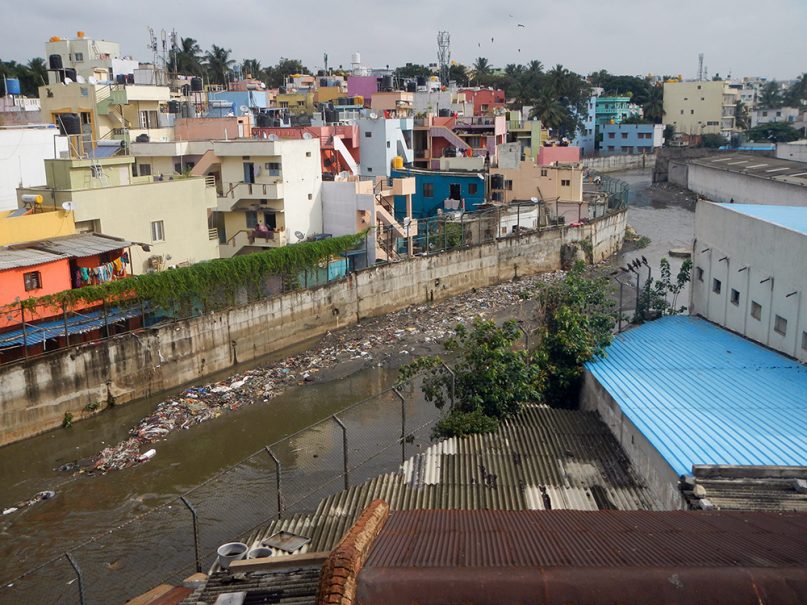 Trash floats in the Vrishabhavathi River near the Gali Anjaneya Swami Temple in Bangalore, India. RNS photo by Priyadarshini Sen

Even the Bangalore Water Supply and Sewerage Board, overburdened by the city’s waste, connected the sewer lines to the river. It permitted the effluents to pollute the river to such an extent that marine life was killed off.

Besides its effect on ritual observances, the frothing mass of water that flows past the temple today is a potential health risk. Villagers downstream complain of diseases such as gastroenteritis, cancer and abdominal, heart, skin and kidney ailments.

“The pollution control board has connived with industries to violate environmental norms. Law enforcement agencies should be held accountable,” said Yellappa Reddy, the chairman of Bangalore Environment Trust, an nongovernmental organization of scientists in the city.

Enraged by the negligence of government agencies and politicians, Reddy plans to file a petition at the Karnataka high court this month.

Politicians and Hindu nationalists, many of whom are frequent visitors to the temple, are accused of turning a blind eye to the toxicity of the river despite the protests.

“Priests are ready to take action if leaders support the resuscitation of our river,” said 55-year-old Ramachandra Bhattacharya, who pours libations on the deity every day. “Even though the public works department has been told to step up their work, the government officers are simply dragging their feet,” he said. 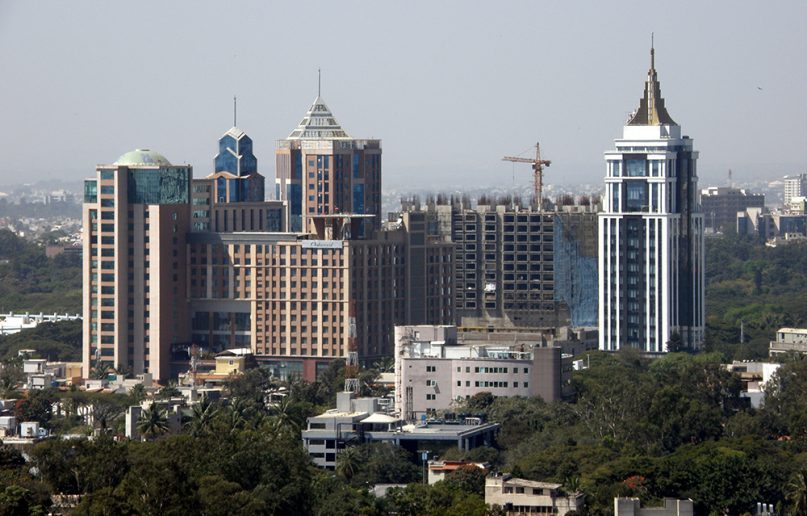 UB City, a luxury mall, dominates the skyline of Bangalore, India. The city has seen a major tech boom since the 1990s. Photo by Prateek Karandikar/Creative Commons

In 2014, the Bangalore Municipal Corp. installed flood control gates around the temple to prevent the river water from entering the inner sanctum during heavy rains.

Even then, the priests complained that the development of the temple was not enough if the environment around their place of worship was not sanitized.

“Now, garbage trucks haul the river’s waste once in six months or so,” said Manoj Bhattacharya, an assistant priest. “Some effluents are pushed to the banks instead of being transported to a landfill or waste treatment facility.”

Though heavy metals, electroplates, dyes and electronic waste have been found in the river through studies by scientists and environmental watchdogs, industries have washed their hands of the problem.

“We don’t dispose industrial waste and have our own sewage treatment plant,” said Sankarapandian Sankaravelayutham, a senior deputy general manager at Amco Batteries Ltd., one of the oldest factories in the region.

“The government should encourage rainwater harvesting and not give approval to builders who fail to come up with sewage treatment plans for their constructions.”

The deputy general manager of Karnataka Vidyuth Karkhane Ltd., a manufacturer of electrical transformers, pins the blame on chemical, plastic and textile industries.

“We outsource our waste to a scrap transport corporation, so we have nothing to do with the river’s pollution,” said MV Srinivasaiah. “The effluents may be from chemical and textile industries.”

Government agencies have also been shortsighted about their sewage treatment plans since they haven’t kept up with the city’s growth and population.

Tushar Giri Nath, the chairman of Bangalore Water Supply and Sewerage Board, said the development of the city has shrunk the watershed area, so every section of the society needs to be held accountable.

“We are setting up nine new plants to treat sewage, but the industries must have their own effluent treatment plants,” said Nath. “The pollution control board should monitor the quality of water and residents must be more conscious.” 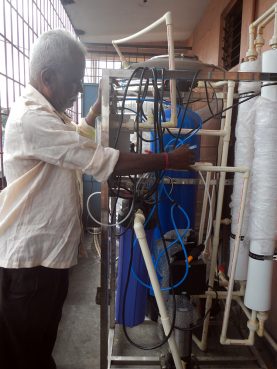 Three years ago, the priests took matters in their hands, installing the purifier that now filters water from a well dredged within the temple’s precincts. Last month, they replaced it with a high-end machine that distills up to 1,000 liters a day.

“This came as a psychological balm for us,” said Manjunatha, an official at a health insurance company in Bangalore. “More devotees will flock to the temple knowing that Lord Hanuman has finally blessed us with clean water.”

Armed with filtered water, the priests go about their daily rituals. They bless worshippers, pour libations on the deity, chant mantras and prepare consecrated food.

The devotees wash their feet in clean water and then circle the temple in clockwise manner holding flowers, basil leaves and knotted betel leaf garlands. On reaching the altar, they bow their heads low as priests sprinkle filtered water over their heads.

“We are still not sure of the water quality, but we believe in god. Industrialists and politicians have exploited our river because they are faithless people,” said Bhavna, an engineering student whose forefathers also worshipped at the temple.

Having done what they can, Gali Anjaneya Swami temple priests idealize a time when the Hanuman deity was in a forested area before urban settlements came up.

“We may never get our river back, but at least the powers above are protecting us from contaminated water,” said Sudarshana. “Our faith has grown stronger.”