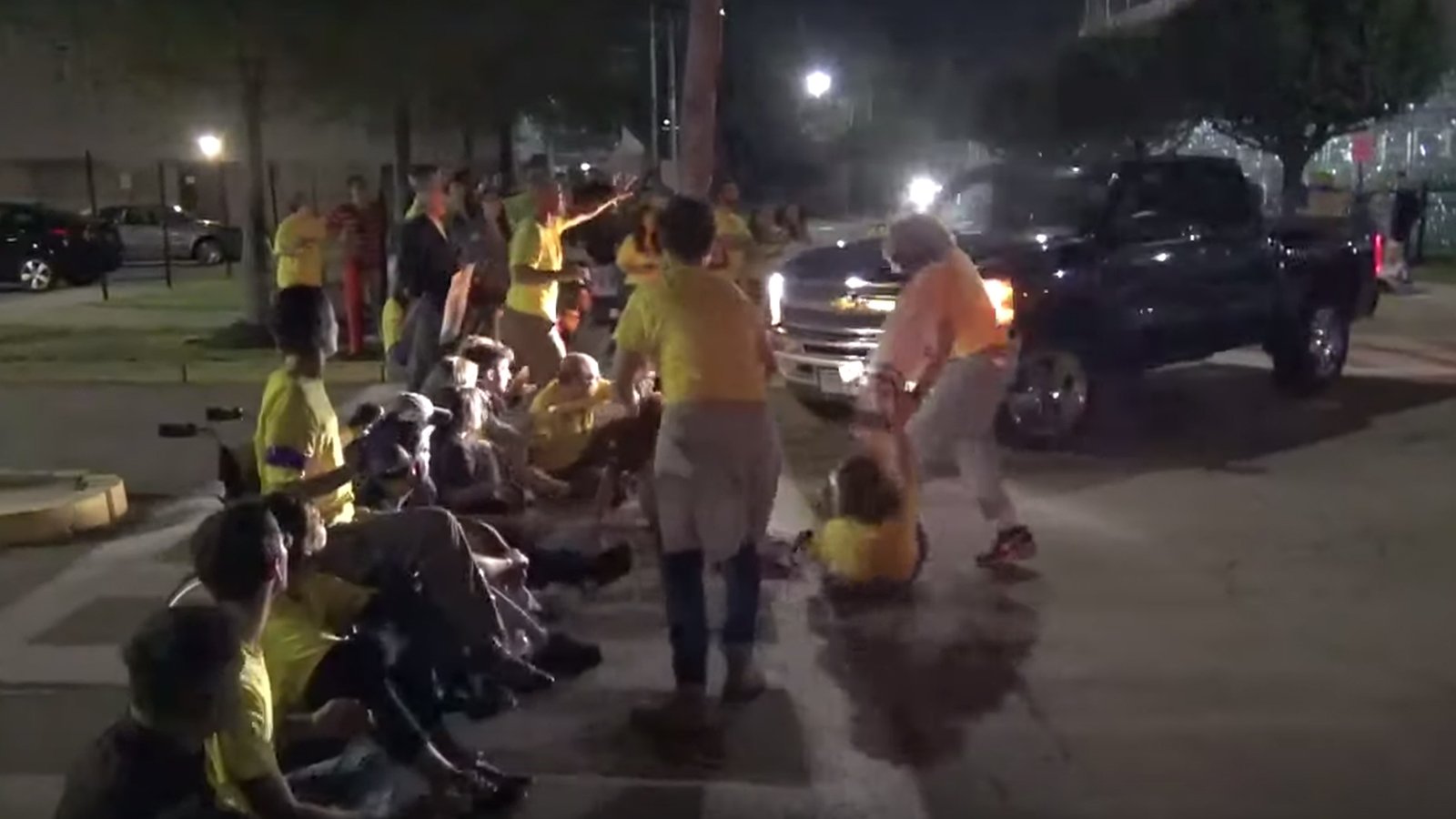 Protesters jump out of the way as a truck begins to move through their line at the Wyatt Detention Facility late Aug. 14, 2019, in Central Falls, R.I. Video screengrab via Steve Ahlquist
August 15, 2019
Jack Jenkins

(RNS) — A truck attempted to barrel through a group of Jewish protesters who were demonstrating outside a detention center in Rhode Island on Wednesday evening (Aug. 14) in an incident that left five people hospitalized and drew attention to Jewish criticism of the Trump administration’s immigration policies.

The demonstration, organized by the Jewish group Never Again Action, took place outside the Wyatt Detention Facility in Central Falls, R.I. According to the American Civil Liberties Union, the center contracts with ICE to house migrants arrested along the U.S.-Mexico border.

Organizers say roughly 400 people gathered for the protest and at least 30 formed a human barricade blocking the entrance to the detention center.

Lex Rofeberg, a demonstrator who is studying to be a rabbi in the Jewish Renewal Movement, said protesters were singing and chanting when a truck pulled up at about 9:45 p.m.

“This truck came and turned directly into the line of protesters,” he said. The driver “showed no interest or regard for the people in front of it, and drove directly into people.”

Footage of the incident, which was shared widely on social media throughout the day on Thursday, showed the truck slamming to a halt just inches from demonstrators sitting on the ground. As people screamed and rushed toward the commotion, a few demonstrators stood in front of the truck, placing their hands on the bumper.

Then the driver accelerated again.

“My impression is that this was designed to intimidate, and violently,” said Rofeberg, who stood a few feet from the truck as it surged forward.

Another video of the incident shows the driver, who appears to be wearing a uniform, stopping after a few feet. He then sits quietly in the vehicle, staring straight ahead as incensed protesters surrounded the truck and began chanting.

They shouted: “Nazi! Nazi! You can’t hide! You support genocide!”

Shortly thereafter a group of officers arrived to disperse the primarily Jewish crowd, during which they appear to have used pepper spray on several demonstrators.

Rofeberg said five people were sent to the hospital as a result of the incident, two from injuries allegedly sustained from the truck and three from exposure to pepper spray. 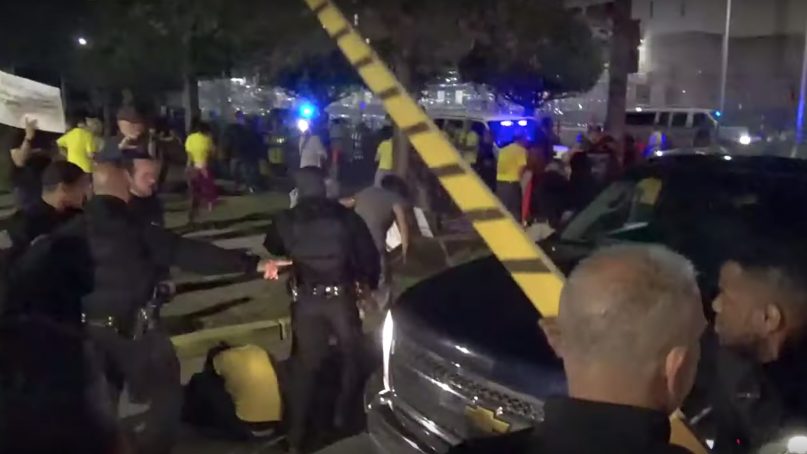 Officials at the Wyatt Detention Facility released a statement Thursday afternoon saying both law enforcement officials and the detention center are investigating the incident. It also said the driver of the vehicle, Capt. Thomas Woodworth, has been placed on administrative leave during the investigation.

The harrowing incident is the latest development in a nationwide campaign staged in recent days by Never Again Action with the goal of stopping local detention centers from cooperating with ICE. Dozens of protests were organized in other parts of the U.S. over the weekend to mark Tisha B’Av, the traditional Jewish day of mourning, including a protest that resulted in the arrest of at least 40 Jewish participants in New York City.

Rofeberg said the group’s name refers to the vow never to allow the mass terror and killings of the Holocaust to happen again. To him and other demonstrators, the Trump administration’s treatment of immigrants — particularly the detention of minors and the separation of families — is reminiscent of how Jews were treated in Nazi Germany in the advent of World War II.

“When I grew up going to religious schools, that was something I was taught: that never again means never again for anybody,” he said. “I care about this issue religiously. I care to the very depths of my neshama,” using the Hebrew word for soul.

Jewish groups have been some of the loudest critics of the Trump administration’s immigration policies. The Union for Reform Judaism was among the first to denounce Trump’s travel ban, invoking Scripture from the Bible's Book of Leviticus that reads “When a stranger resides with you in your land, you shall not wrong him.”

In October 2017, a group of rabbis placed a sukkah — a structure traditionally built for the Jewish holiday of Sukkot, which commemorates the biblical story of Hebrews wandering in the desert for 40 years — outside of Trump Tower to protest the administration’s cap on refugee admissions.

Jews and Jewish leaders have been involved in a number of other protests since, but the intensity has increased with the emergence of Never Again Action. The group has made ample use of dramatic tactics in many of its demonstrations.

Rofeberg said he has been struck by the diversity of Jews who have showed up to protest at Never Again Action events, some hailing from different Jewish traditions and others claiming a secular Jewish identity.

“One of the more quoted aphorisms in a lot of Jewish communities: ‘Two Jews, three opinions,’” he said. “But I think on the issue of immigration there’s actually not all that much disagreement. … This is a situation of ‘Most Jews, one opinion.’”

He added: “Look, when you think about children in cages, there’s not really more than one opinion to have about that. The opinion is: It’s wrong.”

Asked if the incident dented his resolve to protest ICE, Rofeberg said no.

"Jewish texts, Jewish traditions, Jewish history calls on us to make noise," he said. "What our society needs right now is for pretty much every day to be a day of noisemaking ... of resisting the actions of this administration."