With mass shootings becoming a regular occurrence in the United States and gun control efforts largely stalled in government, it’s worth dissecting which Americans support gun control measures, and how they affiliate religiously — or don’t.

To determine this, Ryan Burge, an assistant professor of political science at Eastern Illinois University, has analyzed data from the 2018 Cooperative Congressional Election Study (CCES), a national survey with 60,000 respondents.

The gun control portion of the study can be broken down into three parts: whether respondents want potential gun owners to have a background check, whether they want a ban on assault weapons, and whether they think it should be easier to obtain a concealed-carry permit.

The first measure—requiring background checks wherever a gun might be purchased—has broad support among both religious and nonreligious Americans, as evidenced by Burge’s chart. In fact, the support is overwhelming even among the most religiously conservative groups, such as white evangelicals and Mormons. 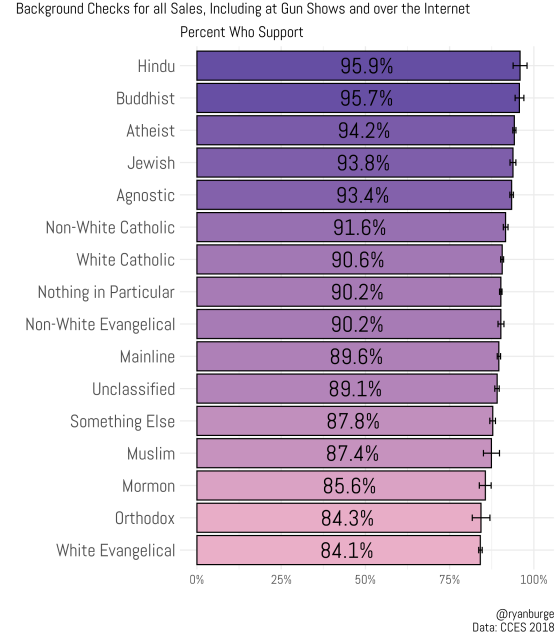 From a social science perspective, this is as close as we might get to any kind of gun control consensus in these politically polarized times.

“Basically, unanimous support is anything above 80%,” says Burge. “That’s about everybody. And even among white evangelicals, who are very conservative, support for background checks is over 80%. If they support it, it’s a canary in a coal mine.”

Burge’s research shows that where background checks are concerned, support crosses party lines as well as religious ones.

For example, among atheists, 98% of Democrats support it, and also 81% of atheists who are Republicans. For Mormons, approval for background checks is steady at 87% for adherents of both major parties. 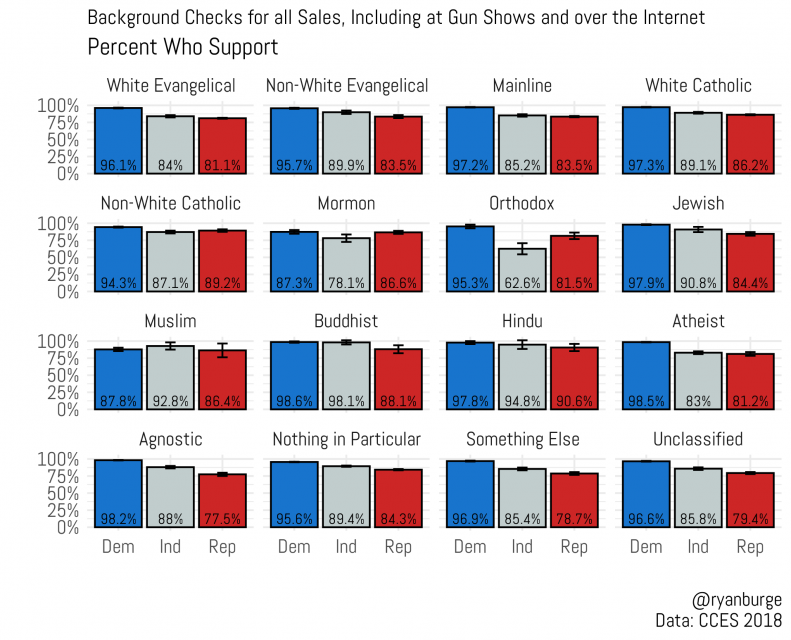 “That’s as broad a support as you can get in today’s climate,” says Burge.

But that’s where the similarities end—both by religion and by party. The other two gun control issues are far more divisive, the CCES research shows.

Some of the most avid opponents of assault rifles are atheist Democrats, and the most avid champions are white evangelical Republicans. 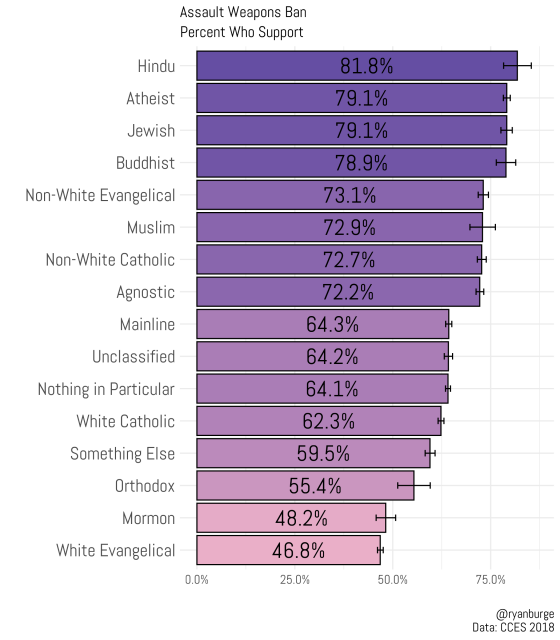 What’s more, the various religious groups are experiencing deep divides within themselves on this question.

That’s not even the largest divide: atheists and agnostics each have a 60-point separation on the assault rifle question. 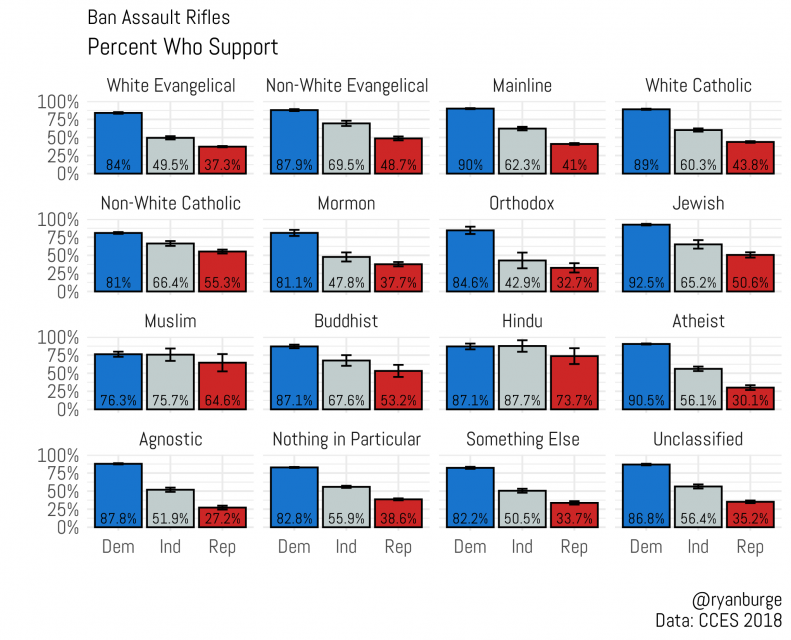 “It looks like Democrats uniformly are in favor of banning assault weapons,” Burge summarizes. “The Democrats are between 80-90% support in banning them, regardless of religious tradition.”

Democrats are also largely unified on the question of concealed-carry permits: they don’t want to make it any easier to obtain them. Democrats in some religious groups (Jews and atheists) poll as low as the single digits in their support for easing the concealed-carry process. Even the highest support among Democrats in any religious group is not overwhelming: 27% of Muslim Democrats would like to smooth the process. Republicans, by contrast, are noticeably more enthusiastic about concealed-carry permits. “Gun control has become a proxy for partisanship, and it breaks really cleanly across party lines,” says Burge.

But he also notes that GOP support for these last two measures isn’t universal. Between 30% to 50% of Republicans in the various religious traditions say they would like to see assault weapons banned. That’s not the overwhelming opposition to assault rifles that the data shows among Democrats, but it is a surprising plurality.

He doubts this will move the needle much on gun control politically, however.

“If you can’t get background checks passed and you have something like a 90% approval rating for it across the board, you’re not going to be able to ban assault rifles,” which does not have majority Republican support.

In sum, Burge says, “The background check has universal appeal, and everything else is partisanship coming to the fore.” 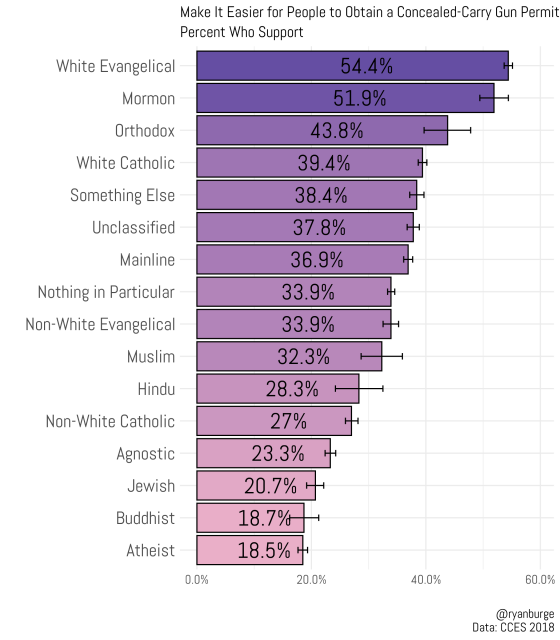 Check out these RNS posts on religion and politics by Ryan Burge:

Why do evangelicals support Trump? Blame the suburbs

Why politics may kill white churches