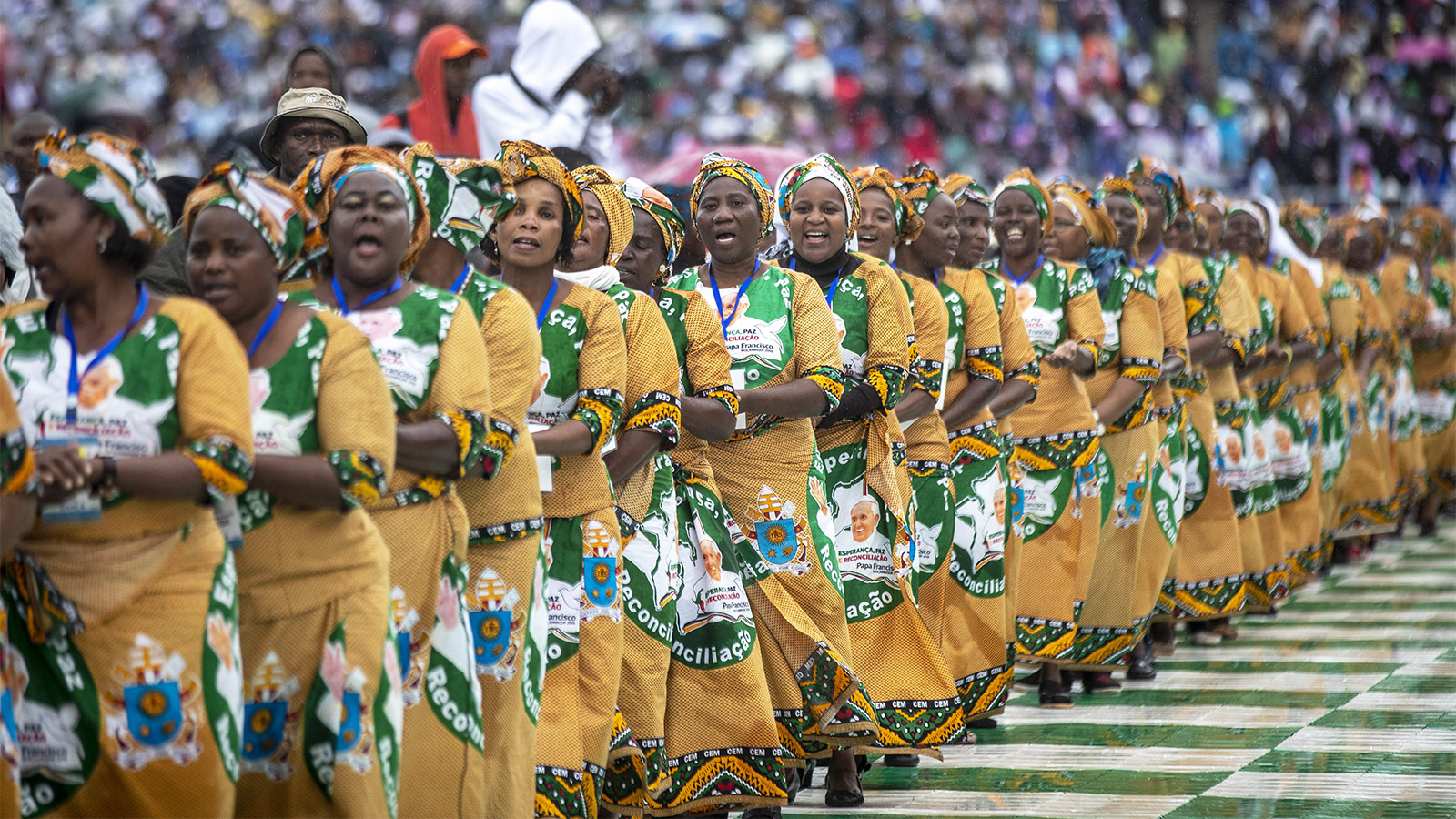 Women sing and dance during a Mass celebrated by Pope Francis at the Zimpeto Stadium, on the outskirts of the capital Maputo, Mozambique, on Sept. 6, 2019. Pope Francis wrapped up his visit to Mozambique on Friday by consoling HIV-infected mothers and children and denouncing the rampant corruption that has helped make the southern African nation one of the world's poorest countries. (AP Photo/Ben Curtis)
September 6, 2019
Claire Giangravé

VATICAN CITY (RNS) — Drumming, dancing and singing erupted from the Zimpeto Stadium in the peripheries of Maputo, in the embattled African country of Mozambique, on Friday when Pope Francis reminded the more than 40,000 people present that “you have a right to peace!”

Mozambique is the first stop of the pope’s three-country trip to Africa Sept. 4-10, where he will also visit the two island nations of Madagascar and Mauritius. He called for peace and beseeched the crowd to care for the sick and the marginalized among them.

“No family, no group of neighbors, no ethnic group, much less a nation, has a future if the force that unites them, brings them together and resolves their differences is vengeance and hatred,” Francis said during his homily for the Mass at the stadium.

Francis’ remarks come just a month after Mozambique's president, Filipe Jacinto Nyusi, signed a new treaty with the armed guerrilla forces, Renamo, led by Ossufo Momade. The treaty was the third effort for reconciliation, following a first peace accord in Rome in 1992 that was mediated by the Catholic lay movement Sant'Egidio.

Presidential and general elections in the country are expected to take place Oct. 15, with both Nyusi and Momade as candidates, raising the concern of a resurgence of the violence that has characterized politics in Mozambique since it gained its independence from Portugal in 1975.

From the moment Pope Francis set foot in the country, he has repeated appeals for peace and reconciliation, starting by bringing the two opposition leaders together during his audience with local authorities on Thursday and culminating with his address to the thousands who braved the rainy weather to attend Mass at the stadium. 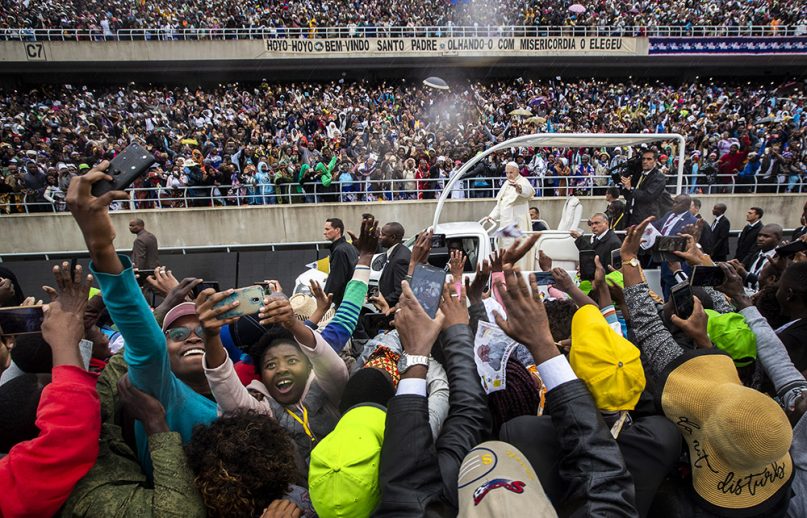 Faithful cheer and take selfies as Pope Francis arrives in the rain for a Mass at the Zimpeto Stadium on the outskirts of the capital Maputo, Mozambique, on Sept. 6, 2019. (AP Photo/Ben Curtis)

During his homily, the pope invited Mozambicans to “an attitude of mercy and goodness above all toward those who, by their place in society, quickly encounter rejection and exclusion.” He lamented a world that, in his view, “kills or abandons the handicapped and the elderly, eliminates the wounded and infirm, or shows itself more concerned with the suffering of animals.”

Beyond the conflicts and devastating cyclones that have ravaged the country, Mozambique also suffers from one of the worst HIV/AIDS epidemics in the world. Almost two million Mozambicans live with HIV, more than half of them women and children, according to UNICEF data.

In the early hours on Friday, the pope paid a visit to the DREAM center in Zimpeto created by the community of Sant'Egidio to treat people living with HIV/Aids. There he met with affected elderly, abandoned women and orphans. A person present at the meeting said the pontiff was “obviously moved by witnessing so many stories of a suffering, yet joyous humanity.”

The center has a presence in 11 African countries and is, for the most part, led by local activists. It has been active in Mozambique since 2002. Since then, they have cured over half a million people — many of them pregnant mothers, allowing 130,000 children to be born free from the disease.

Drawing from the parable of the Good Samaritan, Francis said the DREAM center is a testament to those “who stopped and felt compassion, (who) did not cede to the temptation of saying ‘there is nothing to do, fighting this plague is impossible,’ and worked with courage to find solutions.”

The pope was greeted by the founder of the community of Sant'Egidio, Andrea Riccardi, and the coordinator of the center, Cacilda Massango. Massango had once been HIV positive along with her daughter and is now a leader in promoting therapy and treatment.

“Many of the doctors, nurses and laboratory workers are women," Fausto Ciccacci, an Italian doctor who has been working alongside Sant'Egidio since 2009 and who was present during the papal visit to the DREAM center, told Religion News Service in a phone interview Sept. 6.

"Many of the patients also, especially women, work in the program as activists and advocates to involve more patients and go to the various communities and overcome the stigma. DREAM has a strong component of empowering women.”

Treatment for HIV/Aids requires constant monitoring, and the DREAM center, among the first to come to the country, relies not only on software that keeps track of patients but especially on the women who personally visit the poor and isolated communities to raise awareness and do check-ups.

“There is a parable where, from being women that were often excluded, sick and stigmatized, they become leaders of change,” Ciccacci said.

Ciccacci applauded Pope Francis' efforts in Mozambique to promote peace, reconciliation and attention for people on the margins. “Through his visit, we feel great joy and great encouragement for a peaceful future in the country,” he said.