(RNS) — One of the most important tasks of any community’s elders is to protect children — all children. One obligation of rabbis is to love Torah, live Torah and draw on the experience of Jewish history as continuing Torah. For us, both elders and rabbis, these two imperatives came together in our protest of the treatment of children at the U.S.-Mexico border — and explain why we were arrested last week outside the Immigration and Customs Enforcement office in Philadelphia.

The events leading to our arrest actually began in the spring of 2018. Like many Americans, we were horrified to learn that the U.S. government was separating children from their parents and guardians as they crossed our border from countries where their lives were in danger into what they hoped was safety.

As parents and grandparents, as teachers and rabbis and as Jews, we were deeply shaken because we understood that this was not only a cruel and unlawful act but also one that would traumatize these children and their families for at least three generations to come.

We attended a rally at the Philadelphia ICE office in June 2018, but it didn’t feel as though rallies and demonstrations were enough. That day a colleague from the social justice movements of the 1960s articulated this feeling: We must do something more effective to change this situation.

Later that month, we were invited by the American Federation of Teachers to go with a group of educators and religious leaders to El Paso, Texas, to deliver boxes to children being detained nearby in the small town of Tornillo, close to the Mexican border. 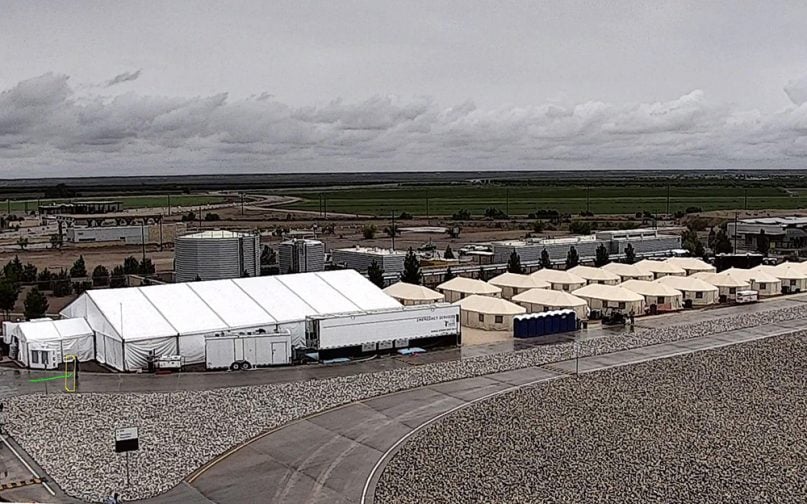 The boxes contained stuffed animals, books in Spanish, paper for drawing and writing, toiletries, clean underwear — items we believed might humanize some aspect of this horrendous experience.

On our way to Tornillo, a local resident told us that the drinking water in Tornillo was contaminated, something we’ve been unable to corroborate but made the situation seem even more horrific.

When we arrived at the prison, located in a brutally hot barren desert, the guards refused to let us in to see, speak with or comfort the children. Worse, they would not deliver the boxes of goods so lovingly packed by the teachers’ union for the children. Many of us religious leaders led prayers for the children’s speedy release to their parents and for our government’s speedy return to sanity. One of those prayers has not yet been fully answered; the other, not at all.

We came home even more distressed. Who knew what other cruelties were in store for these children and their parents?

That night, our group of protesting elders met for a second time, and two days later, on July 1, 2018, we held an action at the Immigration and Customs Enforcement headquarters in Philadelphia that shut down the office for several hours and resulted in six of us being arrested. 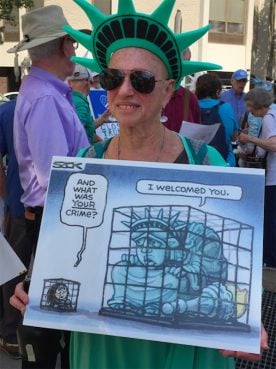 ElderWitness & Friends had been born. The next week, a few younger people sat in and closed the ICE office for several days, until they, too, were arrested.

By this summer ElderWitness & Friends held an action at Independence Hall that drew nearly 100 people; we set up a cage to mimic those that held children whose parents were seeking asylum. About 40 people stepped into the cage holding up posters of each of the 7 children who have died in detention as others read a story of their brief life and unnecessary death.

The action drew a lot of local publicity, but some of us again felt the immoral practices of our government demanded more than political street theater.

At a meeting of ElderWitness in late July, we agreed to another action on Sept. 4, the opening week of school here in Philadelphia, knowing that the children in the administration’s concentration camps had no school to return to in their new and unwelcome life as “criminals.”

We are not alone in our demonstrations against the outrages against children. For the first time in American Jewish history, large cohorts of the Jewish community have come together to resist a major policy priority of the U.S. government.

Truah, the Rabbinic Call for Human Rights and Never Again Action, the latter a swiftly gathered new network of mostly younger Jews, have inspired or carried out dozens of actions and hundreds of arrests around the country.

American Jews are responding to four facts of Jewish history and Scripture: 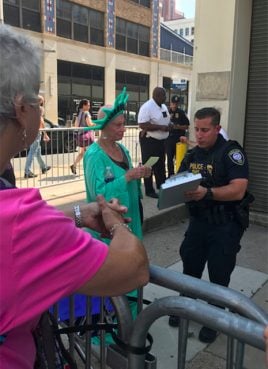 Phyllis Berman is arrested while protesting on Sept. 4, 2019, in Philadelphia. Courtesy photo

Torah commands that we treat “foreigners” with the full dignity of residents and citizens: “One law for the home-born and the immigrant,” and that we welcome refugees from a cruel overlord to live anywhere they choose within our gates. “Do not deport them to their masters; do not mistreat them!” No surprise for a people who saw itself as a band of runaway slaves, a people threatened by a pharaoh’s command to murder children.

For two thousand years, Jews have been forced to seek refuge from persecution by country after country.

Just 70 years ago, those Jewish refugees from World War II who were turned away by the USA and other nations were then returned to Eastern Europe to be murdered in death camps.

Practically every American Jewish family remembers a grandparent or great-grandparent who was an immigrant.

Last week, members of ElderWitness donned Statue of Liberty costumes and again went inside the cage, putting Liberty herself in prison. We repeated the words of some of the children in detention as they described their traumatized situation separated from their parents.

At the end of the group’s choreographed action, the two of us and two other Elders blocked the doors of ICE. The federal Department of Homeland Security, not the more friendly Philadelphia police, arrested us with two citations amounting to fines of $500 for each person.

We are considering whether to pay the fines or stand trial — with the risk of prison and the possible opportunity to make the need for resistance even clearer.

(Phyllis Berman founded and for 37 years directed an intensive English-language school in New York City for adult refugees and immigrants. Arthur Waskow founded and directs The Shalom Center in Philadelphia.)