(RNS) — The president of the historically black Progressive National Baptist Convention traveled to the Bahamas island of Grand Bahama this week to assess the damage from Hurricane Dorian and came away with stories of damage and determination.

The Rev. Timothy Stewart, a Nassau native and resident, visited the island Wednesday (Sept. 11) and has also fielded calls from clergy of his denomination’s 30-some churches in the Bahamas. The PNBC, with an estimated 2.5 million U.S. and international members, is spearheading an initiative to raise funds and collect supplies for the devastated islands of the country.

Stewart said the PNBC started its new ministry year on Sept. 1, the day Dorian hit the Bahamas with Category 5 force, leaving at least 50 dead and at least 1,300 people missing. The denomination’s new focus is “In Pursuit of Wholeness” — a timely topic, Stewart said.

RELATED: Black clergy vow to forge their own path

“We’re looking at the revitalization of the community,” he said. “I think it seems as though God knew something even before I did.”

Stewart talked to Religion News Service on Thursday about what he has seen and heard of Dorian’s aftermath, how people in the Bahamas have been affected, and how he views the tragedy as an opportunity to put his faith into action. 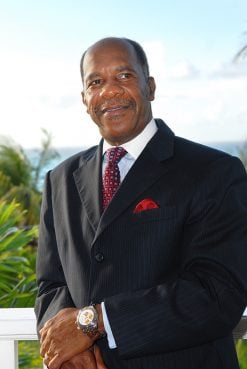 What has struck you most as you have just visited Grand Bahama?

What has struck me most probably would have been the tremendous devastation and, simultaneously, the resiliency of the people, the ability of the people to want to recover from that disaster.

Can you give me an example of what you saw?

I saw many homes where the contents of those homes were basically thrown out of the home, number one. Number two, I observed varying degrees of structural damage. And we saw persons doing their best to clean up and to try to determine what would be the next step that they would take.

What did you do or what did you say to these people that you saw this week?

Well, first, we prayed with them. Secondly, we assured them that we as a convention will assist and do all that we can to help in whatever way we possibly can with regards to bringing relief and bringing assistance at this time. A team from the Progressive National Baptist Convention prays with a man while visiting Grand Bahama island to assess damage from Hurricane Dorian. Photo courtesy of PNBC

In light of what you have seen, what are your main plans in relation to that relief and assistance?

I think it will be multifold. One, it would be, obviously, directing and also providing funds so that persons and especially leaders of churches would be assisted with regards to some of the repairs necessary for churches and also for membership homes. And secondly, I think the opportunity to provide supplies, food, nonperishable and other items, water and some basic necessities would be definitely helpful. And then I think thirdly, when the stage requires it, we will try to provide some building material where and when we can, and fourthly, be available for counseling, fellowshipping and ministry opportunities also.

So are churches in the affected areas serving as shelters?

That’s too bad. Is there anything else particularly you’d tell me that you’ve heard from clergy, pastors, lay people in your denomination or beyond who’ve been affected in any of the islands of the Bahamas?

Oh, yes. On the island of Abaco I’ve heard from, just today, a pastor who literally lost everything, had to evacuate, come to Nassau. He and his family and others are now living under very, very humbling conditions.

But they are grateful for the opportunity to be accommodated where they are: A two-bedroom house is trying to accommodate 12 people. Most of us, we find that difficult to even imagine. And that particular pastor then mentioned to me another pastor who lost his wife. He told me about another pastor who, I think, lost a daughter or two. So we’re talking about some very, very tragic and some very dramatic experiences. Some of the damage from Hurricane Dorian that a team from the Progressive National Baptist Convention saw while visiting Grand Bahama island. Photo courtesy of PNBC

In addition to being a president, you are also a pastor. What do you say to a pastor that tells you this kind of story?

One does one’s best to prayerfully encourage persons and to just assure them that they have our prayers and that they have our support, and anything we can do to assist, we’ll do everything that we could. Nassau was not in the direct path of this storm and was not severely or critically impacted. But we have members in our church who lost loved ones like parents and siblings. And also some of the evacuees would have been family members and some of them have to live with them.

Are you working with other religious groups in the Bahamas?

Are there particular faith groups beyond the Bahamas, like in the U.S., that have been helpful already? 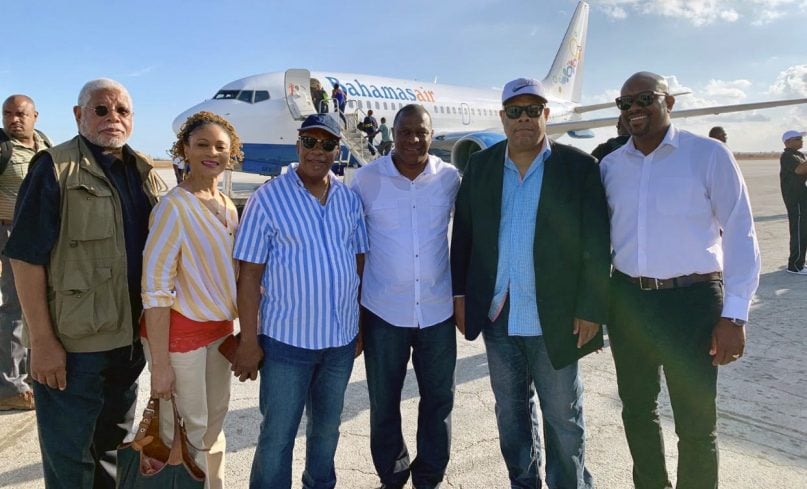 As a religious person and a denominational leader, do you feel like your faith is being tested through this difficult tragedy?

I don’t think my faith is being tested through this tragedy. I believe that this tragedy gives me an opportunity to affirm my faith and to apply my faith.

Apply it in any particular way?

Well, first, we see Scriptures in a new light, where you have to appreciate the reality of suffering on the one hand and, secondly, you also begin to acknowledge God’s mercies even in the midst of trying circumstances. The truth of the matter is, had the hurricane hit Nassau instead of where it did hit then it meant that the entire Bahamas would have been commercially and, for the most part, developmentally crushed.

Because Nassau would be the center of most of what fuels the entire Bahamas. In spite and in light of what has been a very tragic, very horrendous situation, we are forced to still see the grace of God.