PARIS (RNS) — The network of émigré Russian Orthodox parishes in Western Europe, founded in Paris by refugees from the 1917 Bolshevik Revolution, appears to be headed for years of complex canonical and legal disputes after their archbishop announced on Saturday (Sept. 14) that he would rejoin the Moscow Patriarchate and urged his followers to accompany him.

A special assembly of the archdiocese voted on Sept. 7 in Paris to rejoin the Russian Church they had shunned for decades while it was under Soviet influence.

But the vote fell short of the two-thirds majority required to approve the archdiocese’s switch, and the group was expected to revisit the question in a few months’ time with a second vote.

But the announcement by Archbishop Jean of Charioupolis, a 76-year-old Frenchman who has led the archdiocese since 2016, unexpectedly closed off that option, while opening another path that threatens to split the parishes into “leavers” and “remainers” and launch years-long disputes over who owns their Paris cathedral and other property.

It also raises serious issues within the Orthodox world, where two traditional power centers — the Ecumenical Patriarchate in Istanbul, officially the “first among equals,” and the far larger and richer Moscow Patriarchate — have argued themselves into a schism over who has the authority over the modern Orthodox Christian diaspora.

“Church politics in all its glory,” Sergei Chapnin, the former deputy editor of the Moscow Patriarchate’s publishing house, commented icily. “The struggle for the ‘brand’ of the archdiocese has begun.” 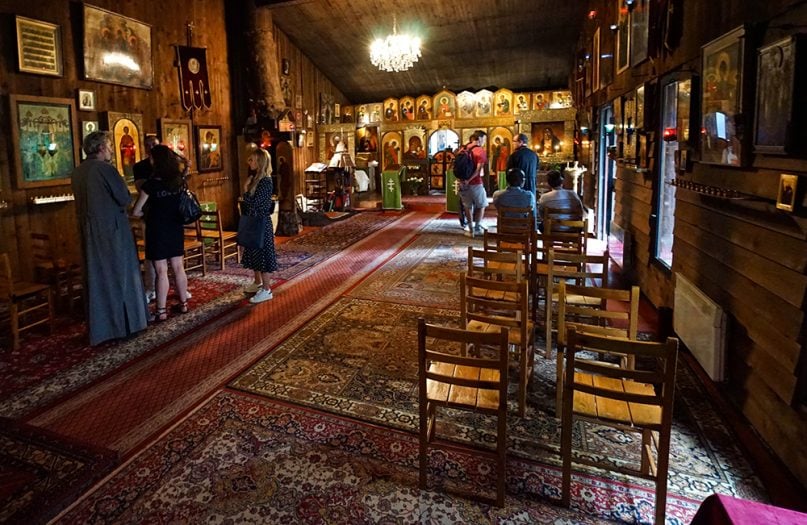 Inside the Church of Saint Seraphin of Sarov in the 15th arrondissement of Paris, one of the émigré archdiocese’s parish churches in France. RNS photo by Tom Heneghan

Although small and scattered across much of Western Europe, the émigré archdiocese enjoys special prestige in the Orthodox world because it stood up to the communist takeover and followed modern reforms decided at the 1917-1918 Moscow Council of the Russian Church but never put into practice there.

About half of its 118 parishes are in France. With the original refugees now just a memory, most parishioners are citizens of the countries they live in and worship in local languages rather than the Russian they do not speak.

Their story reflects the confusion that has grown within Orthodox Christianity in recent centuries as followers of a faith based in Eastern Europe and the Middle East emigrated to Europe, North America and beyond.

Adherence to a national church — an important point for the Orthodox — became a question of identity rather than geography. Cities such as Paris could end up with half a dozen Orthodox archbishops, each loyal to Greek, Russian, Romanian or other traditions.

Some parishes here recognize Ecumenical Patriarch Bartholomew in Istanbul as their official authority, but others declare loyalty to patriarchs in Moscow, Sofia, Damascus or other Orthodox centers. Their liturgies and laws differ slightly according to national traditions.

Now all 118 parishes of the émigré archdiocese will have to decide, probably by special assemblies of their clergy and laity, whether to follow Archbishop Jean to Moscow or join other Orthodox dioceses in their countries that are loyal to Istanbul. 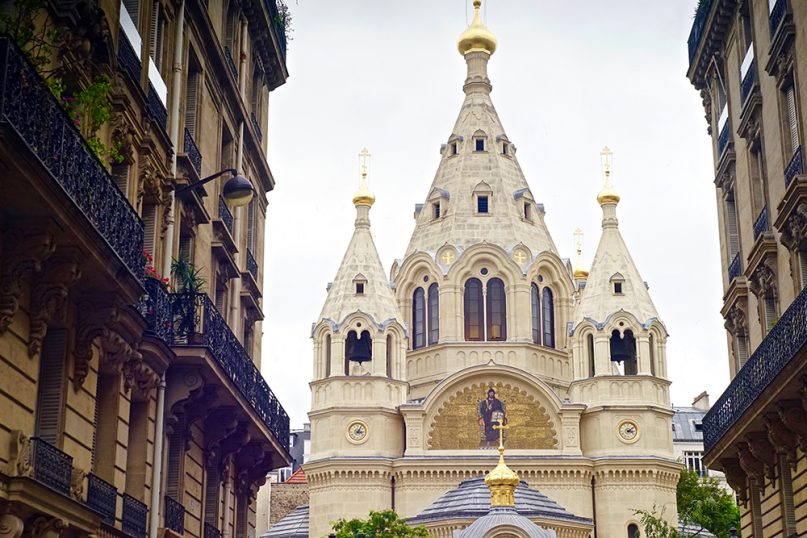 The Alexander Nevsky Cathedral of the Archdiocese of Russian Orthodox Churches in Western Europe in the rue Daru in the 8th arrondissement of Paris. RNS photo by Tom Heneghan

Moscow hailed the archbishop’s decision within hours of its announcement on Saturday, raising suspicions among critics that the Kremlin-backed Russian Church had scored another success in a long-term drive to extend its influence among all Russian churches abroad.

“This wish puts an end to the division of the last part of the Russian Church that until now had remained in isolation,” Russia’s Patriarch Kirill said at the end of his Sunday service in Moscow. “The tragedy of the revolution, the civil war and the division of our Church and our people has come to an end.”

But a transfer of loyalty from Istanbul to Moscow opens a Pandora’s box of technical questions of church law. “Is the goal … to destroy the existing system of canon law by creating chaos?” Chapnin asked. “Can a bishop move anywhere without any documents? Can a priest do that, too?”

In the letter announcing his decision, Archbishop Jean declared Istanbul did not have the authority to dissolve his archdiocese.

“Our archdiocese was not created by the patriarchate of Constantinople (Istanbul),” he wrote. “It was created under the sponsorship of the Moscow Patriarchate in 1924.”

There are material considerations as well. The jewel of the émigré archdiocese is the St. Alexander Nevsky Cathedral in the French capital. A very Russian-looking building amid old Parisian apartment houses, it was built in 1861 with donations from the then Tsar Alexander II.

If its parish decides to stay loyal to the Ecumenical Patriarchate, it can expect a tough legal battle with the Moscow Patriarchate, which successfully sued to recover Russian cathedrals in London and Nice a decade ago from émigrés struggling to keep them.

Archbishop Jean acknowledged the “deep wounds” these property battles caused in Britain and in Southern France. Moscow also tried but failed to win court approval to reclaim a Russian church in Biarritz.

Moscow opened its own cathedral on prime real estate along the Seine River in central Paris in 2016, a trophy project meant to project the influence of Russia and its Orthodox Church. If St. Alexander Nevsky parish agrees to switch its allegiance to Moscow, the Russian Orthodox Church will end up with two cathedrals in Paris, with St. Alexander Nevsky probably demoted to the rank of parish church.

A third issue will be how the émigré archdiocese, famous for formulating a more democratic example of what is a tradition-bound faith, will live under the more authoritarian political and religious traditions of Russia and the Moscow Patriarchate, which has openly supported Russian President Vladimir Putin. Oligarchs allied with Putin have generously funded projects to build or renovate churches at home and expand the network of Russian churches abroad.

Chapnin saw the proposed switch as proof that “the logic of imperial patriarchates” had prevailed. Brandon Gallaher, an Orthodox theologian from Canada who teaches in Britain, agreed, tweeting: “The Empire has won again.”