(RNS) — A lifestyle site aimed at young British Muslim women has drawn anger from readers and staffers when they learned that it was quietly funded by a Home Office counter-extremism program.

The SuperSisters' slick website, blog and Instagram page publish content aimed at inspiring and empowering Muslim women and girls in the U.K. through posts about wellness, entertainment, beauty, politics and current affairs.

But while the site appeared to be run by and for young Muslim women, at one point the site did not have a single Muslim on its editorial team. Instead, SuperSisters seems to be part of a broader strategy by the Home Office to work with PR and digital media agencies to offer young Muslims an anti-terrorism narrative.

Since last year, the website has accepted grant funding from the Building a Stronger Britain Together, a government program that aims to fund “civil society and community organisations who work to create more resilient communities, stand up to extremism in all its forms and offer vulnerable individuals a positive alternative.”

Critics of the British government’s BSBT and other counterterrorism programs argue that the effort stigmatizes Muslims.

“I can now see how working on SuperSisters was going against everything that I believe in and stand for. I am so sorry - to myself aswell (sic),” former employee Sabah Ismail wrote in a statement resigning from her role and railing against the site's lack of transparency.

Ismail alleged that the team had no other Muslims on its creative team when she was hired as the SuperSisters’ social media manager and video producer in February and that she was used as a "female, Muslim puppet and was told whatever was needed to shut me up."

SuperSisters denied this in a statement, saying: “There were Muslim women on the team the entire duration of the project ... We have never claimed to be a platform made by Muslim women.” 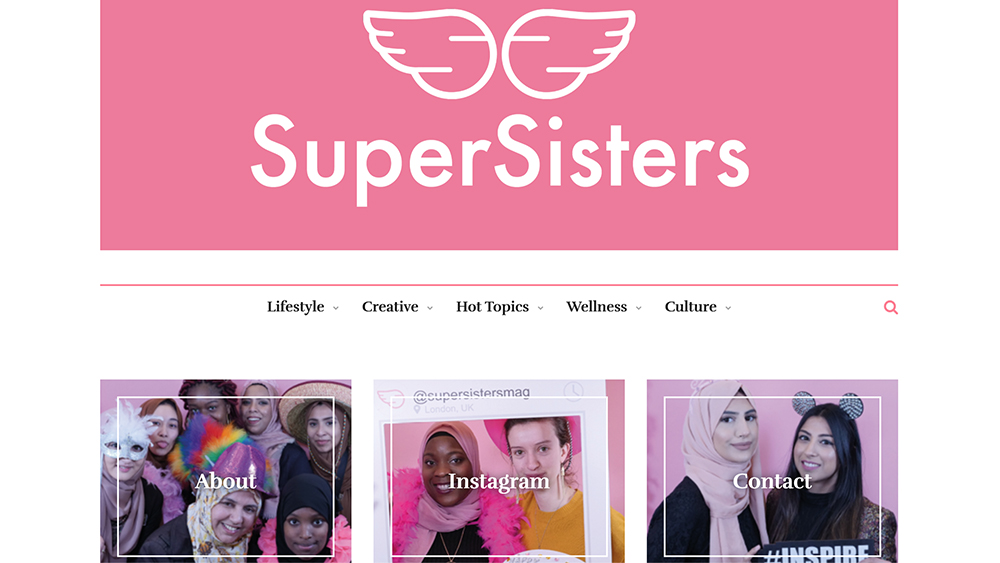 Created in 2015 by a non-profit called J-Go Media after British teen Shamima Begum fled the U.K. to join the Islamic State group, the goal of SuperSisters was to be “a global media platform for young Muslimahs in East London and beyond to share and create inspiring and empowering content with positivity at its core.”

The Home Office confirmed to media that the site received BSBT funding and defended its community partner's work.

"BSBT is an open and transparent programme, which supports local people in their vital work to bring communities together, promote fundamental values and tackle the spread of all extremist ideologies," the Home Office said in a statement to the BBC.

SuperSisters initially received some funding from Prevent, the Home Office strategy that has inspired the U.S.’ own controversial Countering Violent Extremism program, but that funding soon ended.

“Learning that the project was originally funded by Prevent about three years ago quite honestly makes me feel sick to my stomach," Ismail said. "In my naivety, I thought that through this 'opportunity' at SuperSisters I really could help to make real change, pushing forward a different narrative from Muslim women themselves, showing that we are empowered and multi-faceted ... there was no way I could do this regardless of the content I was pushing out."

When Ismail attempted to publish content aimed at the site's Muslim audience, including sayings of the Prophet Muhammad, that content was removed in an attempt to "do away with anything overtly Islamic," she said.

The J-Go team acknowledged removing the posts, saying: "We felt that as JGO is NOT an Islamic organisation, and never claimed to be, it would be wrong to wade into any theological or doctrinal discussions. We didn’t want to pose as someone we are not. We do not believe this makes us 'anti-Muslim' as has been claimed."

In a statement on its website, the J-Go team insisted that the site’s team was Muslim-led and that the team retained full independence and creative control over the content it published.

“We see ourselves as facilitators, who created a platform for Muslim women to come and speak about issues on their own terms,” the statement read. “We do not want to change the Muslim identity. Instead, we want to highlight the plurality which exists within the Islamic community. We want to show that Muslim values are also British values …”

The team also apologized for not explicitly noting its source of funding on its blog and its Instagram account.

“We apply to many different legitimate funding sources to run our projects because we believe they are important,” the website notes. “We have accepted funding from the Building a Stronger Britain Together, because they agreed to fund us, while allowing us to maintain full independent control over the platform, what we do and how we do it.”

The site’s Instagram account — which features video interviews with British Muslim women and graphics of quotes from Rumi, comedian Amy Schumer and activist Malala Yusufzai — now notes the project’s funding in its biography.

Last month, media reports revealed that the Prevent strategy at the Home Office’s Office for Security and Counter-Terrorism was also funding This Is Woke, a Facebook and Instagram media platform that hosts “critical discussions around Muslim identity, tradition and reform.”

J-Go is one of more than 200 organizations in the United Kingdom that has accepted funding from the program.

The Home Office’s public list does not explicitly include SuperSisters, but it does include a slew of other organizations aimed at Muslim audiences, such as the Muslim Women’s Network UK, The Salam Project, The Association of British Muslims, Dawatul Islam UK & Eire, Nisa-Nashim, Faith Matters and the Bolton Council of Mosques.

In June, a dozen artists dropped out of the Muslim-led Bradford Literature Festival when they learned that the festival had also accepted BSBT funding.

“The government’s Counter Extremism strategy relies on the premise that Muslims are predisposed to violence and therefore require monitoring and surveillance, rather than that the material and systemic conditions of economic, racial and Islamophobic violence need addressing as causes of individual perpetration of violence,” poet Suhaiymah Manzoor-Khan, the first artist to withdraw, said in a statement at the time.

“I pray that in coming years BLF’s inclusivity isn’t compromised by having to rely on funding that comes from pots that criminalise the same communities they hope to engage,” wrote Manzoor-Khan, whose book, “Postcolonial Banter," was published this month.