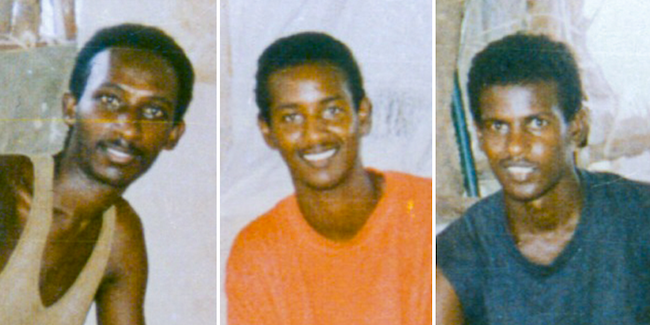 Paulos Eyasu, Isaac Mogos, and Negede Teklemariam, who have been in prison in Eritrea since September 17, 1994. Image copyright: Jehovah's Witnesses Office of Public Information
September 17, 2019
rnsprdistribution

All 52 Jehovah's Witnesses in prison in Eritrea have never been charged, appeared in court, or sentenced

Eritrea is the center point of some of the most intense persecution of Jehovah's Witnesses in modern times. As of September 17, 2019, three of the Witnesses, Paulos Eyasu, Isaac Mogos, and Negede Teklemariam, have been unjustly incarcerated for 25 years. In addition, 39 men and 10 women who are Witnesses are also imprisoned.

All Witnesses currently in prison have never been charged, appeared in court, or sentenced. Therefore, they do not know when they will be released. Four Witness men have died while in prison, and three died after they were released because of the harsh conditions they suffered.

Persecution in Eritrea intensified on October 25, 1994, about a year and a half after Eritrea became an independent country from Ethiopia. The new president declared that Eritrean-born Jehovah's Witnesses were no longer considered citizens primarily because they stood firm to their position of Christian neutrality by refusing to take part in National Service. The president also stripped them of basic civil rights. Among other restrictions, Jehovah's Witnesses are not able to receive a full secular education, own a business, or travel outside of the country.

Jehovah's Witnesses will continue to inform government officials and others in authority about the situation in Eritrea.