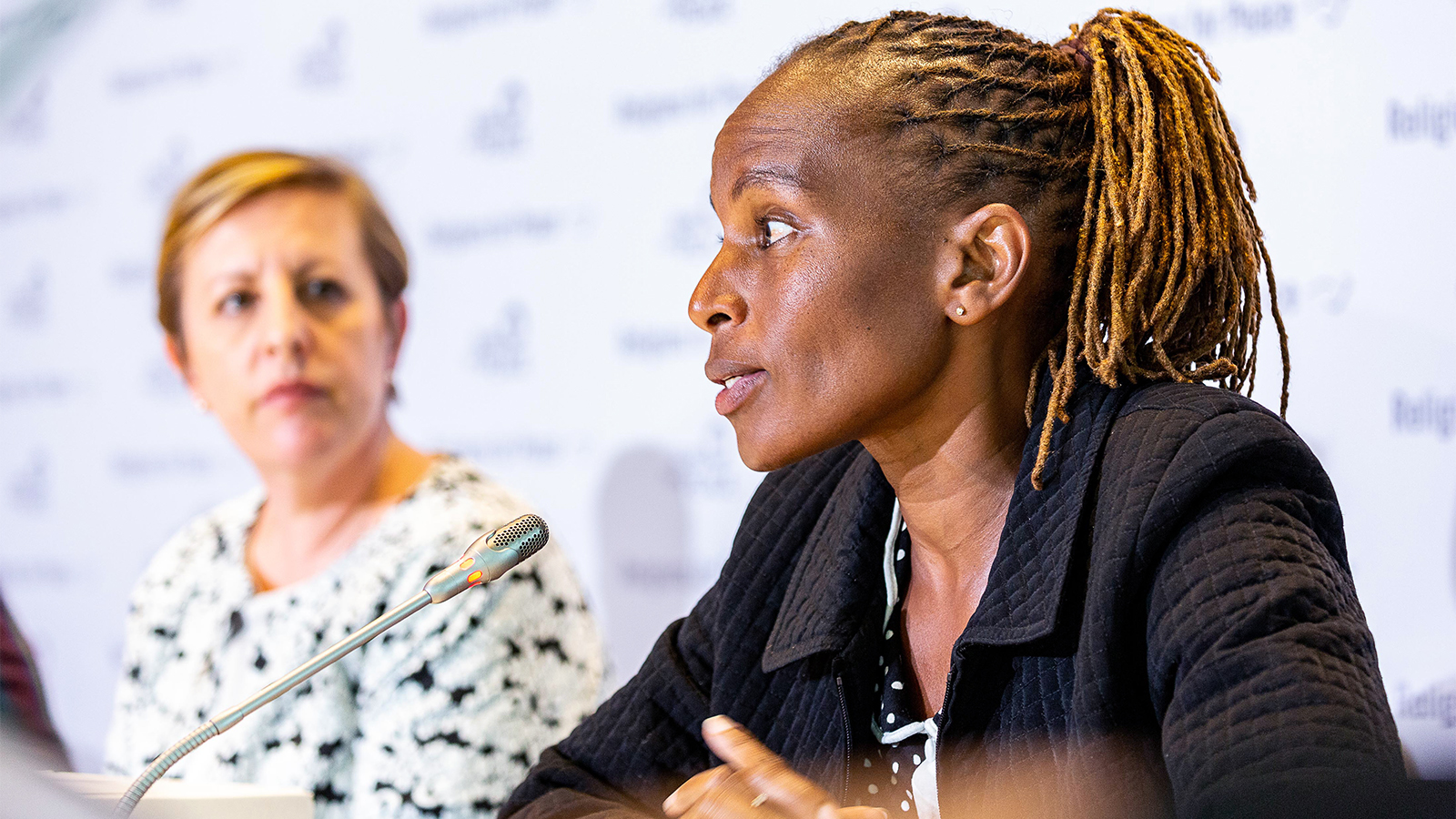 Wangu Kanja, right, speaks during the Religions for Peace conference in Lindau, Germany, on Aug. 22, 2019. Lisa Smith is on the left. Photo by Christian Flemming/Religions for Peace
September 17, 2019
Eric J. Lyman

LINDAU, Germany (RNS) — Two women, one an activist and a survivor of sexual assault and the other a criminologist and university professor, are working on an initiative they hope could change the way rape is treated in the developing world.

The plan, which would create a low-cost, portable, easy-to-use kit for making it easier to identify rapists, is the brainchild of Kenyan activist Wangu Kanja and Lisa Smith, a Canadian criminologist teaching at the U.K.’s University of Leicester.

With the financial and logistical help of churches and religious organizations, plus visibility gained at the 10th Religions for Peace summit recently held in Germany, Kanja and Smith are preparing to roll out a pilot project in Kenya late this year or in early 2020.

Kanja, then 27, was raped in 2002 in Nairobi by a man who had just robbed her and her friends. The man was never caught.

Rape remains a serious problem across Africa. Though reliable statistics are hard to come by, the U.S. Agency for International Development estimates that in Kanja’s home country, Kenya, at least 1 in 7 women are sexually assaulted at some point.

Kanja said her assault sent her into a downward spiral of depression. Eventually, however, her depression turned to motivation — and she vowed to help people who had suffered as she had. In 2005, she founded the Wangu Kanja Foundation, which collects data on sexual assaults and offers support to victims.

Two years ago, Kanja and Smith met at a conference, where they compared notes. Over time, the idea of the kit they are developing came into focus.

“A lot of rape victims in poor countries live too far from a hospital for them to be tested in time,” Smith said. “Sometimes they are too ashamed to admit to the rape and to be examined, or they are worried about cost, or they are scared the perpetrators will find out and find them again.”

Smith noted that because of those reasons and others, most rape cases go unreported. Even when they are reported, she said, rapists are often let off because of insufficient evidence.

That is where the kit Kanja and Smith are developing can come into play. The kits fit into a container smaller than a shoebox and include everything needed to collect DNA samples from a rapist’s blood, saliva, or semen. The kits are expected to cost between $12 and $18 each.

“Once the kits are in the field, it will remove a lot of barriers,” Smith said. “The challenge becomes assuring the girl or woman will get tested within three days.” 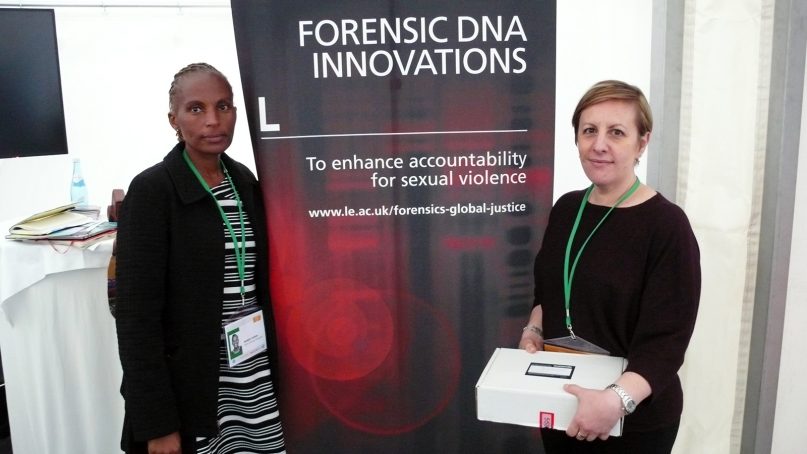 Wangu Kanja, left, and Lisa Smith, holding an example box of how large the low-cost DNA kits they are developing will be, at the Religions for Peace conference in Lindau, Germany. RNS photo by Eric J. Lyman

Kanja said churches will play a role in making the kits available, mostly by helping girls and women who have been raped overcome any shame they feel and counseling them to go to facilities where the tests can be administered using the portable kits. In some cases, churches themselves can help administer the tests.

“Many African women will turn to their church or their minister for help before they will go to a hospital or the police,” Kanja said. “We have to remember that sexual violence is a kind of human rights violation.”

The hope, according to Kanja and Smith, is that as use of the kits spreads — after the pilot project in Kenya, there are plans to expand it to Congo and Malawi — it will be successful in identifying rapists and getting them off the streets. And if conviction rates rise that will also begin to act as a deterrent.

Kanja’s network from her foundation will help spread the word and get the kits to the places where they are most needed, while Smith’s role is to make sure each kit includes inexpensive, reliable tools for tests to be carried out. The kit will include cotton swabs for collecting saliva samples, and a tube that can be used to collect DNA samples from a girl or a woman’s vagina. The kits will also allow the samples to be stored correctly until they are tested and to remain “DNA neutral” so results are not contaminated.

The interfaith organization Religions for Peace and its partner organization Ring for Peace have so far played a protagonist role in the development of the initiative: not just by promoting the work of Kanja and Smith at the recent assembly in Germany, but also with funding: Ring for Peace has provided 400,000 U.K. pounds (just under $500,000) in seed money to get the project off the ground.

“Projects like the one Wangu Kanja and Lisa Smith are working on is important,” said economist Wolfgang Schürer, a former chair of the Foundation Lindau Nobel Laureate Meetings, a newly named honorary president of Religions for Peace and the person who brought the project to the attention of Religions for Peace.

“This kind of project can benefit a great deal from the backing this kind of organization can offer,” Schürer said. “It’s also for Religions for Peace. We focus on big issues like climate change, conflict, poverty, where the goals are very long term. It’s also good for the organization to back something that can produce results very quickly.”

Related Posts
By Darren Tyler
How coronavirus lockdowns in the US starve vulnerable abroad
By Kelly Wairimu Davis
Amid pandemic, the Wichita Kenyan community unites virtually through food and family
By Adelle M. Banks
National Day of Prayer, reshaped by pandemic, includes interfaith and online events
By Susan Hayward, Azza Karam, Katherine Marshall
Religion can be a healing balm for COVID-19's disruption, if applied judiciously
By Satpal Singh
India’s executions won’t end a pandemic of violence against women