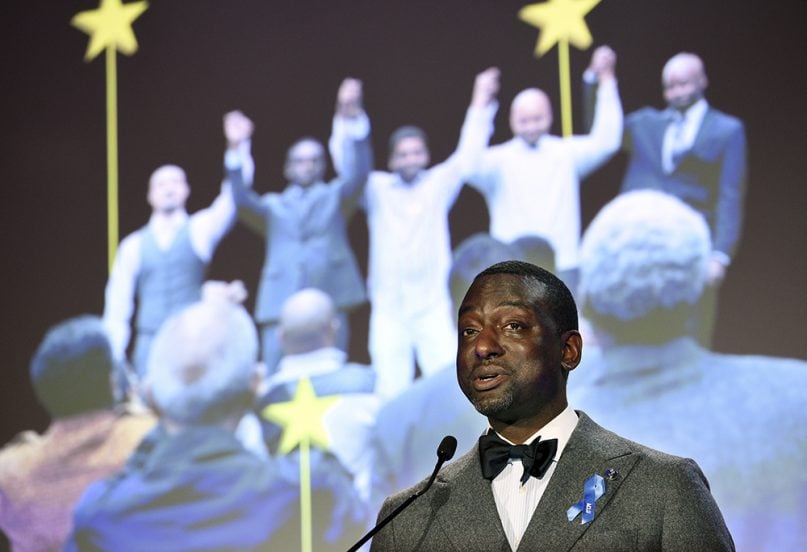 Honoree Yusef Salaam, one of five Harlem teenagers who was wrongly convicted of assaulting and raping a female jogger in New York City’s Central Park in 1989, addresses the audience at the ACLU SoCal’s 25th annual luncheon on June 7, 2019, in Los Angeles. (Photo by Chris Pizzello/Invision/AP)

(RNS) — In 1989, Yusef Salaam, like many African American teens growing up in New York’s Queens borough, had big dreams of being a hip-hop artist, or maybe a graphic artist. But on April 20 of that year, Salaam, then 15, and four other young black men’s lives were turned upside down. A young woman who had been jogging in Central Park in Manhattan was found early that morning raped and beaten. Salaam, hearing that the police were looking for him, turned himself in, accompanied by his friend Korey Wise, thinking he could convince them of his innocence.

Instead, Salaam, questioned without his parents or a lawyer present, confessed to the crime, as did the other four, including Wise. They became known as the Central Park Five. Despite their attempts to retract their statements, their confessions helped to convict all five of rape and assault. There was no physical evidence of the Central Park Five’s culpability.

Salaam served nearly seven years in prison, regaining his freedom in 1997. In 2002, another man came forward to confess to the rape of the Central Park jogger and the convictions were vacated. The Central Park Five received a $41 million settlement from the city of New York (Salaam’s portion was $7 million) though the city admitted no wrongdoing.

In June, Netflix released “When They See Us,” a miniseries about the Central Park Five, directed by Ana DuVernay.

Salaam, who today is a motivational speaker, talked to Religion News Service in front of an audience of Christian schoolchildren and their teachers near Atlanta. He makes clear that he’s not bitter or angry about his treatment but is focused in talking about his Muslim faith and how “the power of Christianity,” he said, played an influential role in the truth being told. The interview has been edited for length and clarity.

How are you really doing? There’s a lot going on in your life.

I feel like I’m ready to tell and share my story. I’m a husband and the father of a blended family of 10 kids. My wife and I brought six kids from our former marriages — the good book says be fruitful and multiply — and we’ve had four kids together. But it’s four and no more for us.

What was life like for you as a teenager (before your arrest)?

I wanted to be a graphic designer.  I had great aspirations to be a hip-hop artist. In this Aug. 11, 1990, file photo, Yusef Salaam enters State Supreme Court in Manhattan with his mother, Sharonne Salaam, on the third day of deliberations in the Central Park jogger trial. Salaam and four other teenage boys maintained their innocence as they grew up behind bars after being convicted in the rape and brutal beating of a jogger. Their convictions were eventually tossed out by a judge when new evidence surfaced linking someone else to the crime. (AP Photo/Phillip Schoultz)

Are you OK if we go back to the day the police came to pick you up for questioning that would lead to your arrest?

I knew the police were looking for me particularly. I knew it was because people in the neighborhood began to talk. They said, “Yo, Kane, they looking for you” — my nickname was Kane because of my high-top haircut (rapper Big Daddy Kane was known for his high-top fade). I said, “Well, why are they looking for me?” And they said, “Because of what happened in the park last night.”

I knew I had been in the park, and, to my advantage, I knew I had done nothing wrong. So I saw no reason not to speak with them to set the record straight. I always say that my only crime was hopping the (subway) turnstile after we all left the park. I thought I could talk with them and they would see that I was innocent.

Your life changed dramatically within a 24-hour period. How did you learn to trust God, yourself and the people around you with that dramatic change? How do you deal with trust? Is that a fair question to ask?

It’s a fair question. I think a lot of folks would appreciate that question. You know, we forget that God is the author of everything, including this story and time that we live in. When I arrived at the prison, the officer asked me a question that I’ll never forget. He asked, “Who are you?” And when he said that, I said, “I’m Yusef Salaam, the guy that they accused of raping the Central Park jogger, but I didn’t do it.” And he said, “I know that, because I’ve been watching you.”

What did that question do to you? 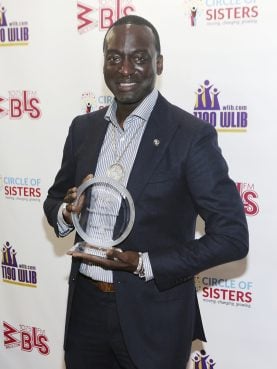 The question was a spark that allowed me to start diving into myself, my past, present and future self. The question was life-changing and set me on the path that I’m on today. We were born on purpose; we were born with a purpose.

Do you feel like you found your purpose in prison?

Yes, when you find yourself in so-called dark places, there’s always a light somewhere in the darkness. Even if that light is inside you, you can illuminate your own darkness and shine your light on the world. My faith became so much stronger in prison because I couldn’t turn to anyone but God.

Can we talk about President Trump? After the arrests of the Central Park Five he ran three ads in New York newspapers, asking for the death penalty for the group. If he asked to meet with you, would you?

You’re a Muslim, and you speak in both Muslim and Christian environments. What has that been like?

I’ve learned that we are more similar than we are dissimilar. We forget that God is always looking. God is always taking notes. So, as I talk in multifaith and multidenominational spaces, what I appreciate and love is that we have this multifaith background. What I love about it is the connection to God.

How can the church help those in prison?

The church is a beacon of hope in the community. It’s because of the Christian church that the group got out of prison. Matias Reyes, the real perpetrator of the crime, had been going to church while he’d been in prison. He was trying to atone for all of the wrong that he’s done, (even) knowing that he will never step foot outside of the prison walls.

He bumps into Korey Wise, whose only crimes were being a friend of mine and going with me into the police department. The real perpetrator begins to try to apologize to Korey and tells him what he’s done, which ends up being proven. So, you have to look at the power of Christianity.

News
What four strangers of different faiths learned while living together during a pandemic
Martini Judaism
If you’re religious and supported President Trump
News
Indoor worship is now allowed in LA County, but some parishes and dioceses are waiting
News
As California’s hospitals fill, Kirk Cameron hosts another unmasked Christmas caroling event
News
How a podcast is helping this Catholic and gay Latino man break the stigma