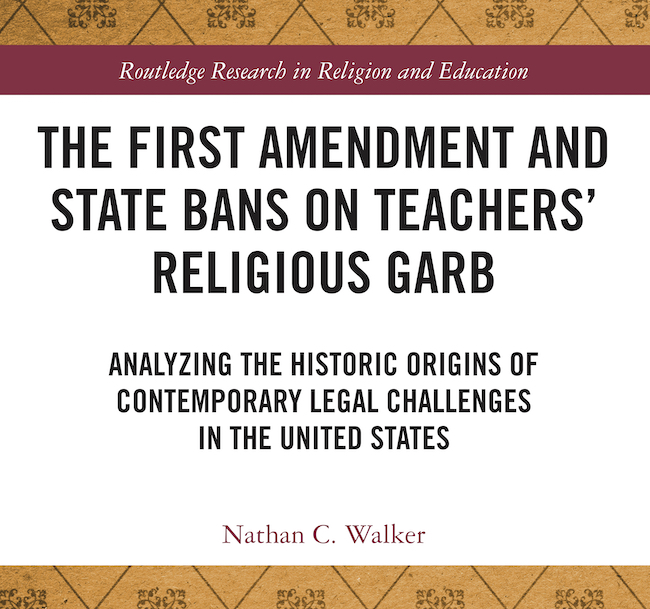 Examining the twelve-decade legal conflict of government bans on religious garb worn by teachers in U.S. public schools, this book provides comprehensive documentation and analysis of the historical origins and subsequent development of teachers’ religious garb in relation to contemporary legal challenges throughout the globe.

By identifying and correcting factual errors in the literature about historical bans on teachers’ garb in the U.S., Walker demonstrates that there are still substantial and unresolved legal questions to the constitutionality of state garb statutes and reflects on how the contemporary conflicts are historically rooted.

Showcased through a wealth of laws and case studies, this book is divided into eight clear and concise chapters and answers questions such as: what are anti-religious-garb laws?; how have the state and federal court decisions evolved?; what are the constitutional standards?; what are the establishment clause and free exercise clause arguments?; and how has this impacted current debates on teachers’ religious garb?, before concluding with an informative summary of the points discussed throughout.

The First Amendment and State Bans on Teachers’ Religious Garb is the ideal resource for researchers, academics, and postgraduate students in the fields of education, religion, education policy, sociology of education, and law, or those looking to explore an in-depth development of the laws and debates surrounding teachers’ religious garb within the last 125 years.

The Rev. Dr. Nathan C. Walker is executive director of 1791 Delegates, a consortium of First Amendment educators named after the Bill of Rights was ratified. In this capacity he manages The Foundation for Religous Literacy. He is the program chair of the Law & Education SIG and chair elect of the Religion & Education SIG for the American Educational Research Association and currently teaches Law & Religion and Religion & Human Rights at Rutgers Honors College. Nate has published five books, including serving as coeditor of The Oxford Handbook on Religion and American Education (2018); and co-editor Whose God Rules? Is the United States a Secular Nation or a Theolegal Democracy? (Palgrave Macmillan 2011), which Cornel West calls “provocative and pioneering.” Nate is the author of the article “Political Contempt and Religion” in Paul Djupe, ed., The Oxford Encyclopedia of Politics and Religion. He coauthored with Lyal S. Sunga, Promoting and Protecting the Universal Right to Freedom of Religion or Belief through Law (International Development Law Organization 2017), which was presented at the United Nations Human Rights Council. Nate was formerly a resident fellow in law and religion at Harvard University and received his doctorate in First Amendment lawt from Columbia University, where he received his Masters of Arts and Masters of Education degrees. He received his Masters of Divinity degree from Union Theologial Seminary and is an ordained Unitarian Universalist minister, serving as the community minister for religon and public life at the Church of the Larger Fellowship. His website is www.NateWalker.com.