Divorce has declined in America. Teen pregnancies are down. The rate of out-of-wedlock births is likely stagnant. But you might never guess that from the views of the most religious people in the United States, because they’re more likely than other Americans to believe that social ills are on the rise.

Research findings from the American Family Survey, now in its fifth year, show that a majority of people in the United States incorrectly suppose that various social changes that they might view negatively are happening more frequently. For example, roughly nine out of ten Americans believe that divorce is climbing, but that’s not the case: in 2007, according to the CDC, there were 3.6 divorces for every 1000 people, while in 2017 that had dropped to 2.9.

Religious Americans are even more likely than others to get such facts wrong.

“People who report that religion is important to them and who attend church regularly are more likely to respond incorrectly to questions about teen sex, teen births, and births outside of marriage,” says Christopher Karpowitz, a professor of political science at Brigham Young University and a co-director of the Center for the Study of Elections and Democracy, in an email. “That is, they are more pessimistic than they should be.”

The study found that born-again Protestants were the most likely to be wrong about teen sex, teen pregnancy, and births outside of marriage, as shown in red in the bar graph below. The Nones (non-religious Americans) were the least likely, though a majority still answered each question incorrectly. Catholics and mainline Protestants were in the middle. (Other religious groups, such as Jews, Muslims and Mormons, had too small a representation in the sample of more than 3,000 respondents to achieve a meaningful result.) 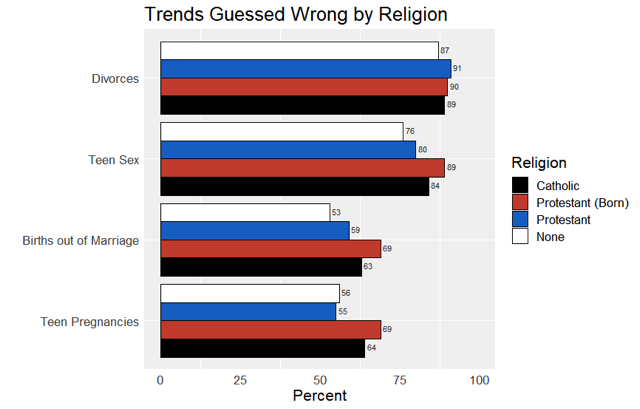 These findings were in line with an overall takeaway from the study: there is an odd sort of pessimism afoot. Americans report being happy with their own marriages and families, but anxious about the state of the family in society as a whole.

Such “misguided pessimism” about trends in the U.S. family “is correlated with increased negativity about the overall state of marriages and families,” the survey showed. In a nutshell, a majority of Americans seem to think that although things are satisfying in their own homes, other people’s families are in trouble. In the absence of correct information, they appear to be vulnerable to what the study’s authors call “negative sensationalizing” about broader social trends. 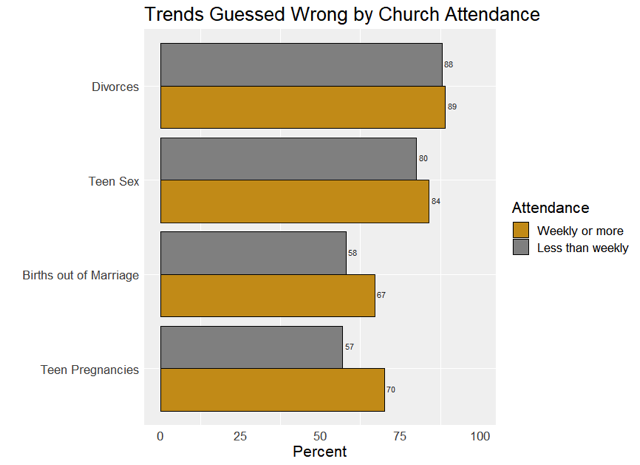 “Regardless of whether trends are improving or getting worse, many Americans simply assume that everything is moving in the wrong direction,” says Karpowitz. “That’s not true, but the correlation between getting the answer to the trends question wrong and being more pessimistic about family life generally really stood out to me. Many Americans fail to see that there are reasons for optimism about family life, too.”

On the other hand, the AFS found that some aspects of the traditional family actually are in decline. Among younger Americans, marriage does not have the same cachet as an institution that it used to. Over the five years the study has been conducted, the percentage of people who consider marriage to be “old-fashioned and out-of-date” has risen from 12% to 18%, with the change being most obvious in the 18-29 age bracket.

Marriage is also the domain of the socioeconomically and racially privileged. Marriage is most likely for college-educated white people who make more than $80,000 a year, especially if they are religious. “Americans who report going to church once a month or more are much more likely to be married than those who attend church less frequently,” the study reported.

Fewer Americans now see marriage as a necessary prerequisite in creating strong families. In 2015, 62% felt that way, but this year that had declined to 54%.

And among the youngest respondents, the dip was even more pronounced over the same period. While 51% of young adults said in 2015 that marriage was needed to create strong families, just 37% held that opinion in 2019. The AFS has identified these changing attitudes toward marriage as a trend to watch for the future, as younger respondents enter into the data pool.