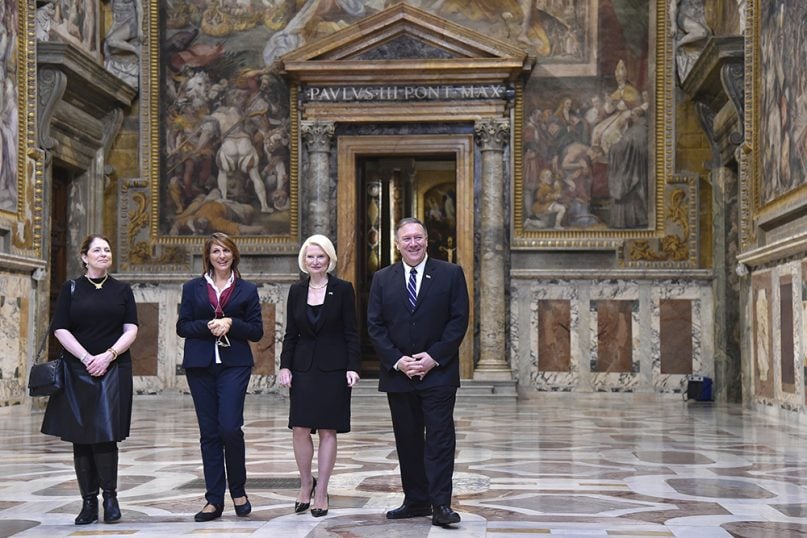 U.S. Secretary of State Mike Pompeo, right, is flanked by U.S. Ambassador to the Holy See, Callista Gingrich, second right, and his wife Susan, left, as they listen to a guide during a visit to the Sala Regia (Regal room) state hall, at the Vatican, on Oct. 2, 2019. U.S. Secretary of State Mike Pompeo on Wednesday criticized governments that wield absolute power as threats to religious freedom, as he scrambled to contain a political crisis back home. (Andreas Solaro/Pool Photo via AP)

“When the state rules absolutely,” Pompeo repeated several times during his opening remarks, “human dignity is trampled,” “moral norms are crushed completely” and the state “demands its citizens worship government, not God.”

The former head of the CIA identified what he called the worst offenders of principles of religious freedom: the regime of Bashar Assad in Syria, the authoritarian leadership in Iran and the ongoing persecution of people of faith in China.

Pompeo also spoke about the “violent and brutal” persecution of Rohingya Muslims in Burma, stating that “freedom of religion can also be threatened when an intolerant majority rules.”

More than one speaker at the symposium, held in Old Synod Hall at the Vatican, praised the partnership between a pope and a president who shared a deep antipathy to communism that had such wide repercussions on the Cold War, asking what new synergies the relationship might yield.

“Think of the millions of believers who can live with dignity and purpose, who can now worship without fear, thanks to the joint efforts of a pope and a president. What blessing to the world!” Pompeo said. 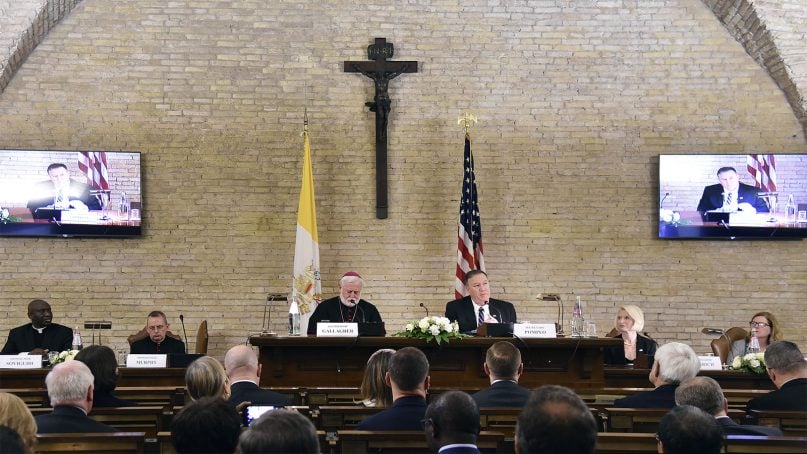 But Pompeo darkly warned that backing religious freedom was, if anything, more difficult now than in Reagan and John Paul II's day. “Today we must gird ourselves for another battle in defense of human dignity and religious freedom," he said. "The stakes are arguably higher than they were even during the Cold War, because the threats are more diverse and more numerous.”

U.S. Ambassador-at-Large for International Religious Freedom Samuel Brownback underlined the relationship between the U.S. and the Vatican, especially as it prepares to face “challenges not seen years ago.”

“Our commitment to religious freedom should not, must not and cannot change. In our historic moment what actions will we take?” Brownback asked. “In this time of courageous leadership by Pope Francis and President Donald Trump, I echo Secretary Pompeo’s call to reinvigorate that commitment that began 35 year ago.”

Echoing Reagan's speech at the Berlin Wall in 1987, aimed at a crumbling Soviet Union, Brownback said, “It is time to tear down the wall of religious oppression.”

The Trump administration has made its commitment to religious freedom a pillar of its foreign policy rhetoric. Mostly recently, Trump focused on religious freedom in an address to the United Nations on Sunday, stating that about 80% of the world’s populations live in countries where they cannot confess their faith.

More than 100 foreign delegations and 1,000 civil and religious leaders met in Washington, D.C., in July for the Second Ministerial to Advance Religious Freedom, aimed at raising awareness about threats to the free exercise of faith in the world. At the ministerial, the White House launched the International Religious Freedom Alliance, a network of nations united to combat religious persecution around the globe.

The Vatican's foreign minister, Archbishop Paul Gallagher, who took part in the ministerial this summer, shared the dais with Pompeo at the Vatican's symposium.

Gallagher called Pompeo’s presence “a clear sign of the importance he attaches to the relationship between the Holy See and the United States of America.”

But Pompeo also acknowledged that while the two leaders have common ground in religious freedom and other issues, Pope Francis and Trump's strong differences on immigration, diplomacy and the environment bar an alliance like that between Reagan and John Paul II.

“The Holy See and the United States have had our differences over the year. Good people can disagree,” he said. “But the issues of human dignity and religious freedom transcend everyday politics. On the enduring struggle of the individual’s right to believe and worship, we must march together.”