ALIGARH, India (RNS) — At her self-styled Hindu court in this city noted for its large Muslim minority, Pooja Shakun Pandey, a 37-year-old Hindu ascetic with a radical hate for Mohandas Gandhi, dispenses justice.

Draped in a saffron sari, Pandey, who considers herself a disciple of Nathuram Godse, the assassin of Gandhi who shot him at point-blank range in 1948, chants mantras before a ritual fire on the grounds of the local headquarters of Hindu Mahasabha, India’s oldest right-wing Hindu Nationalist Party.

On completing her rituals, Pandey opens her courtroom — splashed with images of the Hindu deity Lord Ram in his battle-ready avatar — for the day’s first hearing.

“Since August last year, we’ve intervened in over 60 cases related to dowry, marriage and property disputes,” said Pandey. “If Muslims can have their Sharia courts, so can we.”

Last year in July, the Hindu Mahasabha Party petitioned India Prime Minister Narendra Modi demanding closure of all Muslim Sharia courts in India, which act as mediators in small disputes, though they have no legal sanction.

When their petition was denied, the Hindu Mahasabha set up five unsanctioned courts of their own across the state of Uttar Pradesh, based on Hindu principles of justice.

Claiming that modern secular laws favor the privileged classes, the Hindu court mediators rely on an “ethical system of justice,” according to Pandey. They conduct secret inquiries and background checks on “suspicious people” and reform deviants using practices they claim were prevalent in ancient India, such as cow protection, farm work, social service and caring for the elderly. A cow shelter at the Hindu court in Aligarh, India. Cows are considered sacred in Hinduism. RNS Photo by Priyadarshini Sen

“We want to bring back the ancient Indian legal system, which was overthrown by the British rulers,” said Pandey, who has a Ph.D. in mathematics but no legal training and draws from classical Hindu texts such as the Gita and Manusmriti. “Soon, we’ll have 15 more such courts across India.”

The Hindutva mediators charge no fees but claim to “cleanse the minds of the people, implant fear in them and bring the deviants back to the inner core of Hinduism.”

The Hindutva courts often deal with cases that concern inter-religious romance. Love affairs between Muslim men and Hindu women are perceived as conspiracies to convert Hindus to Islam.

“We do puja to cleanse the girl’s mind and even get the police involved,” said Pandey. “Hindus need to become stronger to stop such manipulations.”

“We stand with them and are looking for like-minded people who will support the cause and take action without fear,” said Brijesh Baghel, a resident of the city who approached the Hindu court six months back to “free his daughter from a Muslim man.”

Many communities in India have traditional dispute-resolution systems that derive their legitimacy from the conventional values of the community and are more popular than official legal avenues due to their informal setup and more immediate results.

The punishments handed out include public humiliations, beatings and ritual expiations. (In the worst scenarios, judgments can result in honor killings or punitive rapes.)

Though the Hindu courts’ backers believe that their form of justice will also appeal to people’s emotions instead of a cut-and-dry legal system, Hindu Mahasabha projects itself not merely as a custodian of culture and public morality, but also as a striver for a new constitution where Hindu laws would govern all citizens as in “the kingdom of Lord Rama.”

“We are not going against the Indian penal code,” said Gajendra Singh Arya, a lawyer who also practices at Aligarh’s official civil court. “We are only hoping for a uniform civil code where an overarching Hindu law will dominate the country and ensure an ethical system of justice.”

Arya said Hindutva advocates are in the process of drafting a comprehensive Hindu system of justice.

That ambition has drawn the ire of the ruling Bharatiya Janata Party, a competitor for the loyalty of Hindu nationalist voters. 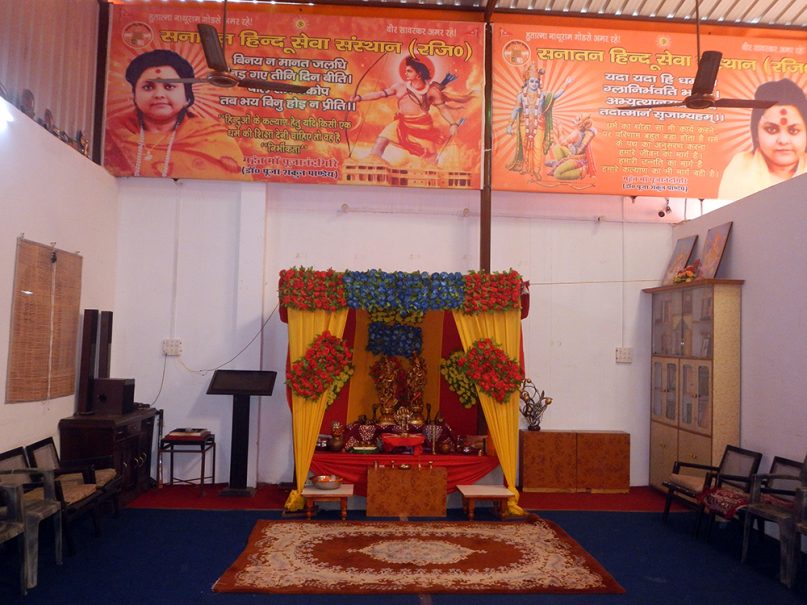 The Hindu court used as an arbitration center to resolve civil disputes in Aligarh, India. RNS Photo by Priyadarshini Sen

Manav Mahajan, the BJP’s general secretary in Aligarh, said a parallel system of justice is unsustainable. “They are asking for their own court, later they will ask for their own school, college and hospital. This happens when a person starts seeing herself as god,” said Mahajan, referring to Pandey.

Aligarh’s member of parliament, Satish Gautam, a radical Hindutva advocate, said Pandey has risked arrest for holding her court and is the subject of several government lawsuits.

Not all observers see the courts as a threat. Abdul Waheed, a sociology professor at Aligarh Muslim University, said informal methods of redressing grievances like Pandey’s could reduce the burden on the country’s courts.

“In India, there are many grassroots-level redressal forums for different communities,” said Waheed. “It’s up to the government and not the civil society to check malpractices.”

“This is purely politics of majoritarianism,” said Sajjad. “By fanning this religio-cultural insecurity, the Hindu Mahasabha is manufacturing the fear of marginalization among Hindus.”

In fact, much of the thrust of Hindu Mahasabha’s courts seems to be aimed at their long-term goal of ending Islam’s informal justice system. In 2014, India’s Supreme Court declared Islamic Sharia courts unconstitutional, saying their decisions were not legally binding. Though the decision stopped short of banning them altogether, the verdict drew sharp reactions from Muslim clerics who said the constitution gave them the right to work and act according to the Muslim Personal Law. 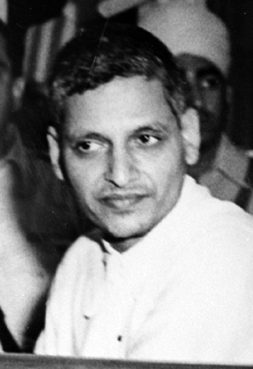 Nathuram Godse while on trial in 1948 for the murder of Mohandas Gandhi. Photo courtesy of Creative Commons

“Unless the government bans Sharia courts,” said Ashok Sharma, Hindu Mahasabha’s national vice president and an ardent Nathuram Godse fan who runs another Hindu court in the neighboring city of Meerut, “Hindus will persist with their aggression.”

Many in the party blame Gandhi for .for pushing his tolerant vision of India that has shaped its constitution by giving equal citizenship rights to all faiths.

“Gandhi’s divide and rule policy has marginalized Hindus,” said Sharma. On the 150th anniversary of Gandhi’s birth this week, Sharma made a ritual offering to eradicate the Mahatma’s influence on Indians. (For her part, Pandey shot at an effigy of Gandhi to celebrate the anniversary of his death in January, courting another charge against her.)

“We will not stop ’til Hindus regain lost ground in India,” Sharma added. “Our constitution needs to be changed, and our laws will be grounded in Hinduism’s core values.”

“Our popularity is growing even among Muslims who have understood that only one religion dominates the world,” said Pooja Shakun Pandey. “That’s the power of Hinduism.”