(RNS) — As a white evangelical Christian from a rural town in Georgia, I grew up around people who looked like me, thought like me and worshipped like me. The media I consumed typically depicted foreign-born people as the bad guys — criminals, terrorists, people to fear. Then, in 2013, after seminary, I moved with my wife to Clarkston, a community outside Atlanta that has welcomed thousands of refugees. It turned our world upside down in the best way possible.

Clarkston put us face-to-face with people from far-flung countries who had overcome traumatic displacement and were rebuilding their lives. They looked different from us and cherished different faiths, but their stories were fundamentally human. In showing me the world through their eyes, they freed me from my fear.

That freedom brought so many good things into my life. It allowed me to forge some of my closest friendships; today my best friends are people from Iraq, Afghanistan, Bhutan and Congo. It deepened my Christian faith, allowing me to catch a glimpse of God’s kingdom here on earth and better understand the story of Jesus, himself a refugee.

Perhaps most surprisingly, it revealed an incredible business opportunity that would help not only refugees, but American companies and the nation’s economy as well.

In Clarkston, I noticed a common problem: My refugee neighbors struggled to find stable work. They were highly motivated and eager to provide for their families, but language barriers, transportation, limited social networks and xenophobia made finding pipelines into the marketplace difficult.

At the same time, a number of local companies were struggling to fill critical job vacancies. This is a national problem. As of January 2018, there are 7.4 million job openings but only 6 million job hunters, according to the U.S. Department of Labor. Unemployment is 3.7% nationally; in the greater Atlanta area, it’s 3.5%.

Realizing that I could solve essential problems for both groups by playing matchmaker, I founded Amplio Recruiting, a staffing company that in five years has placed 5,000 refugees into full-time employment with roughly 230 companies across Georgia, North Carolina and Texas. We’re expanding into Michigan this fall, with plans to reach 25 locations by 2025. 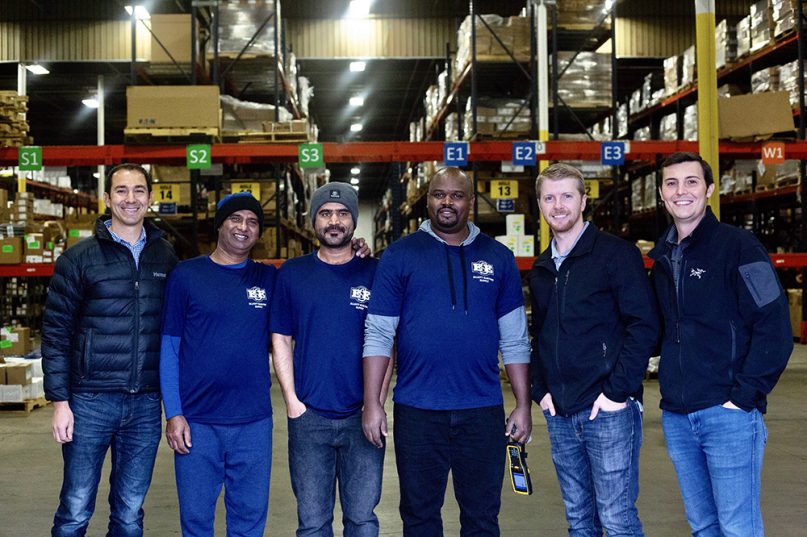 The vast majority of our placements are in manufacturing, construction and hospitality, industries with some of the country’s highest labor shortages. Our client surveys have shown a strong retention rate among our recruits. Within three months of being hired, the vast majority dramatically improve their English, and about 40 percent have purchased their own vehicle. From there, many go on to buy a home, get a GED or start college courses.

For employers, refugee staffing has allowed companies to plug workers into critical, often labor-intensive positions, keep up with client demand, improve productivity and even expand.

America has long welcomed refugees for humanitarian reasons, but doing so also has practical benefits. According to New American Economy, refugees paid almost $21 billion in taxes in 2015, supporting critical social programs that benefit millions of Americans.

That same year, 13 percent of refugees were entrepreneurs, compared with just 11.5 percent of nonrefugee immigrants and 9 percent of the U.S.-born population. In 18 states, including Georgia, refugees hold more than $1 billion in spending power.

Refugees work hard because they want to reclaim the dignity they’ve lost from displacement and expand opportunities for themselves and their children. My friend Malek, a refugee from Syria whose first job was at a coffee shop, launched his own catering business a few short years later and hired a team of five to work with him.

Najib, a refugee from Afghanistan, worked as a carpenter after he arrived. This summer, as the owner of a custom wood carving business, he presented a giant, 40-pound hand carving of the presidential seal to former President George W. Bush, thanking him for sending troops to Afghanistan and helping save his family. President Donald Trump speaks to members of the media on the South Lawn of the White House in Washington on July 12, 2019. (AP Photo/Andrew Harnik)

Unfortunately, our current administration is actively working against refugees. The White House has dramatically cut refugee admissions over the past two years, reducing the refugee ceiling to its lowest level in 40 years. Last week, President Donald Trump announced plans to slash refugee admissions even further, with plans to possibly end the resettlement program altogether.

This comes on top of last month’s executive order that would let state and local governments refuse to settle refugees who have already been admitted to the United States. The policy could limit economic contributors at a time when our country needs anyone who is willing and able to clock in and get to work.

These decisions seem to be rooted in fear. I understand this. It’s easy to be afraid of the unfamiliar, just as I once was. But my experience has taught me that being liberated from that fear and inviting refugees brings goodness on so many levels.

As a business leader, I see how refugees offer solutions to our economic challenges. As a Clarkston resident, I see how refugees bring vibrancy to the neighborhood. As a Christian, I see that refugees have taught me profound lessons about friendship, hospitality and God’s vision for our world. When I walk through Clarkston and see the colorful tapestry of humanity, I’m reminded of the Christian vision of heaven. It doesn’t look homogeneous like my rural hometown. In fact, it looks like Clarkston. What a gift it is to glimpse heaven here on earth.

(Chris Chancey is the founder and CEO of Amplio Recruiting, a staffing agency with multiple locations that helps companies hire dependable employees. His book “Refugee Workforce: The Economic Case for Hiring the Displaced” was released in September. The views expressed in this commentary do not necessarily reflect those of Religion News Service.)