A novice monk sleeps during a talk by the Tibetan spiritual leader Dalai Lama at the Tsuglakhang temple in Dharmsala, India, on Sept. 4, 2019. The three-day talk, which was organized at the request of a Southeast Asian Buddhist group, ended Friday. (AP Photo/Ashwini Bhatia)
October 11, 2019
kitdoyle

(RNS) — Each week Religion News Service presents a gallery of photos of religious expression around the world. This week’s gallery includes Yom Kippur events, the conclusion of Durga Puja and more. An ultra-Orthodox Jewish man swings a chicken over his children's heads as part of the Kaparot ritual in Bnei Brak, Israel, Monday, Oct. 7, 2019. Observant Jews believe the ritual transfers one's sins from the past year into the chicken, and is performed before the Day of Atonement, Yom Kippur, the holiest day in the Jewish year which began at sundown Tuesday. (AP Photo/Oded Balilty) 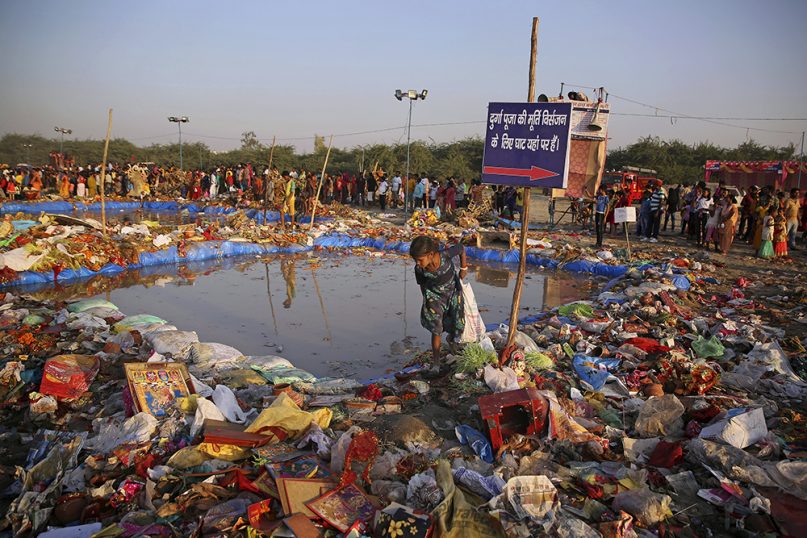 A young Indian ragpicker looks for reusable items after Durga rituals, in which devotees immersed statuettes of the goddess Durga in a makeshift pond, in New Delhi, India, Tuesday, Oct. 8, 2019. Authorities have banned the more traditional immersion of statues into river Ganges, its tributaries to minimize damage to the river. The festival commemorates the slaying of a demon king by lion-riding, 10-armed goddess Durga, marking the triumph of good over evil. (AP Photo/Altaf Qadri) Israeli acrobat Tel Karassin performs on a car-free highway during the Jewish holiday of Yom Kippur in Tel Aviv, Israel, Wednesday, Oct. 9, 2019. Israelis marked Yom Kippur, or 'Day of Atonement,' the holiest of Jewish holidays, when observant Jews atone for the sins of the past year and the Israeli nation comes to almost a complete standstill. Many residents take bicycles onto the streets as no traffic is permitted on the roads. (AP Photo/Oded Balilty) A Hindu priest splashes water on a sacrificial goat as a part of a ritual during Dashain festival in Bhaktapur, Nepal, Monday, Oct. 7, 2019. The festival commemorates the slaying of a demon king by Hindu goddess Durga, marking the victory of good over evil. Animals are sacrificed at Hindu temples during this festival. (AP Photo/Niranjan Shrestha) Ultra-Orthodox Jews buy palm fronds to build Sukkahs ahead of the upcoming Jewish holiday of Sukkot, in the Orthodox Jewish neighborhood of Mea Shearim in Jerusalem, Thursday, Oct. 10, 2019. The holiday commemorates the Israelites 40 years of wandering in the desert and a decorated hut or Sukkah is erected outside religious households as a sign of temporary shelter. The weeklong holiday begins on Sunday. (AP Photo/Oded Balilty) 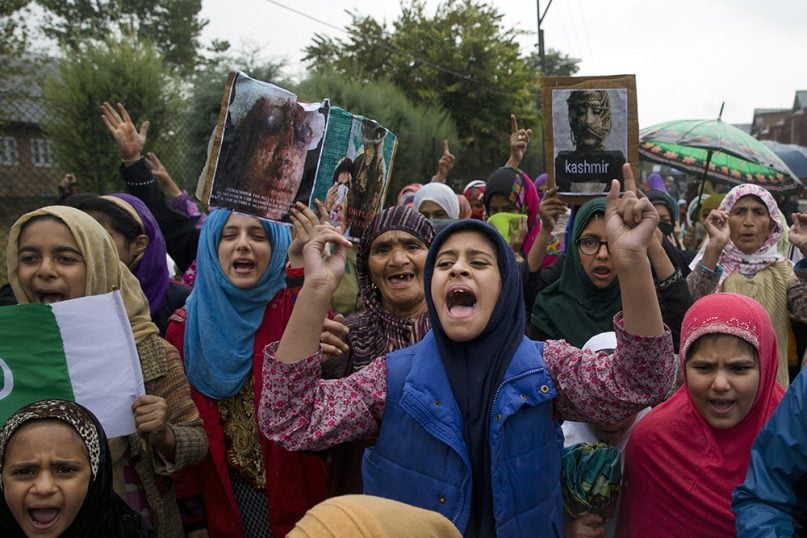 Kashmiri women shout slogans during a protest after Friday prayers on the outskirts of Srinagar, Indian controlled Kashmir, on Oct. 4, 2019. For the last two months, mobile phone and internet services have been shut down in Indian-controlled Kashmir, after New Delhi stripped the region of its semi-autonomous powers and implemented a strict clampdown. India has sent tens of thousands of extra troops to the region and detained thousands of people. (AP Photo/ Dar Yasin) 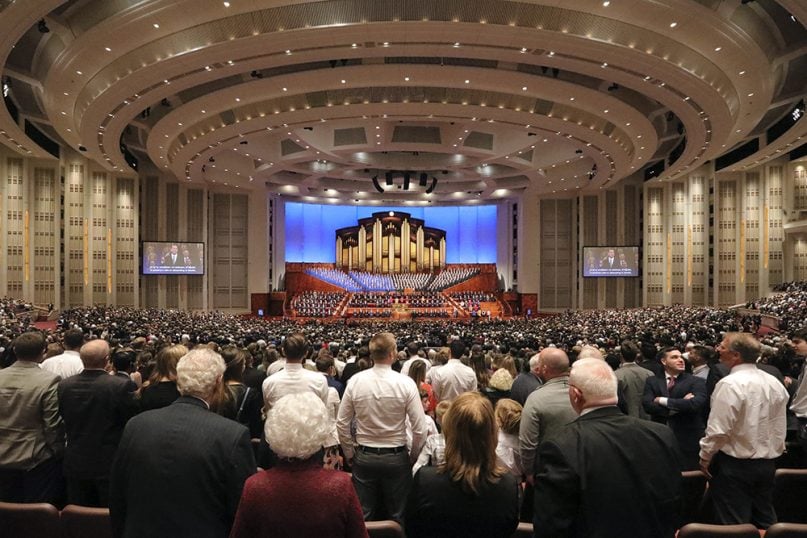 People attend the Church of Jesus Christ of Latter-day Saints' twice-annual church conference Saturday, Oct. 5, 2019, in Salt Lake City. Anticipation was high as President Russell M. Nelson has rolled out a dizzying number of policy changes during his first two years at the helm of the faith. (AP Photo/Rick Bowmer) Pope Francis walks in a procession on the occasion of the Amazon synod, at the Vatican, on Oct. 7, 2019. Pope Francis opened a three-week meeting on preserving the rainforest and ministering to its native people as he fended off attacks from conservatives who are opposed to his ecological agenda. (AP Photo/Andrew Medichini) Hindu devotees visit ”pandals” or a temporary structures set up to worship the Hindu goddess Durga, during the Durga Puja festival in Kolkata, India, Sunday, Oct. 6, 2019. The five-day festival commemorates the slaying of a demon king by the goddess Durga, marking the triumph of good over evil. (AP Photo/Bikas Das) People take part in a minute of silence and a demonstration against anti-semitism at the marketplace in the old town of Halle, Germany, Friday, Oct. 11, 2019. A heavily armed assailant ranting about Jews tried to force his way into a synagogue in Germany on Yom Kippur, Judaism's holiest day, then shot two people to death nearby in an attack Wednesday that was livestreamed on a popular gaming site. (AP Photo/Jens Meyer)