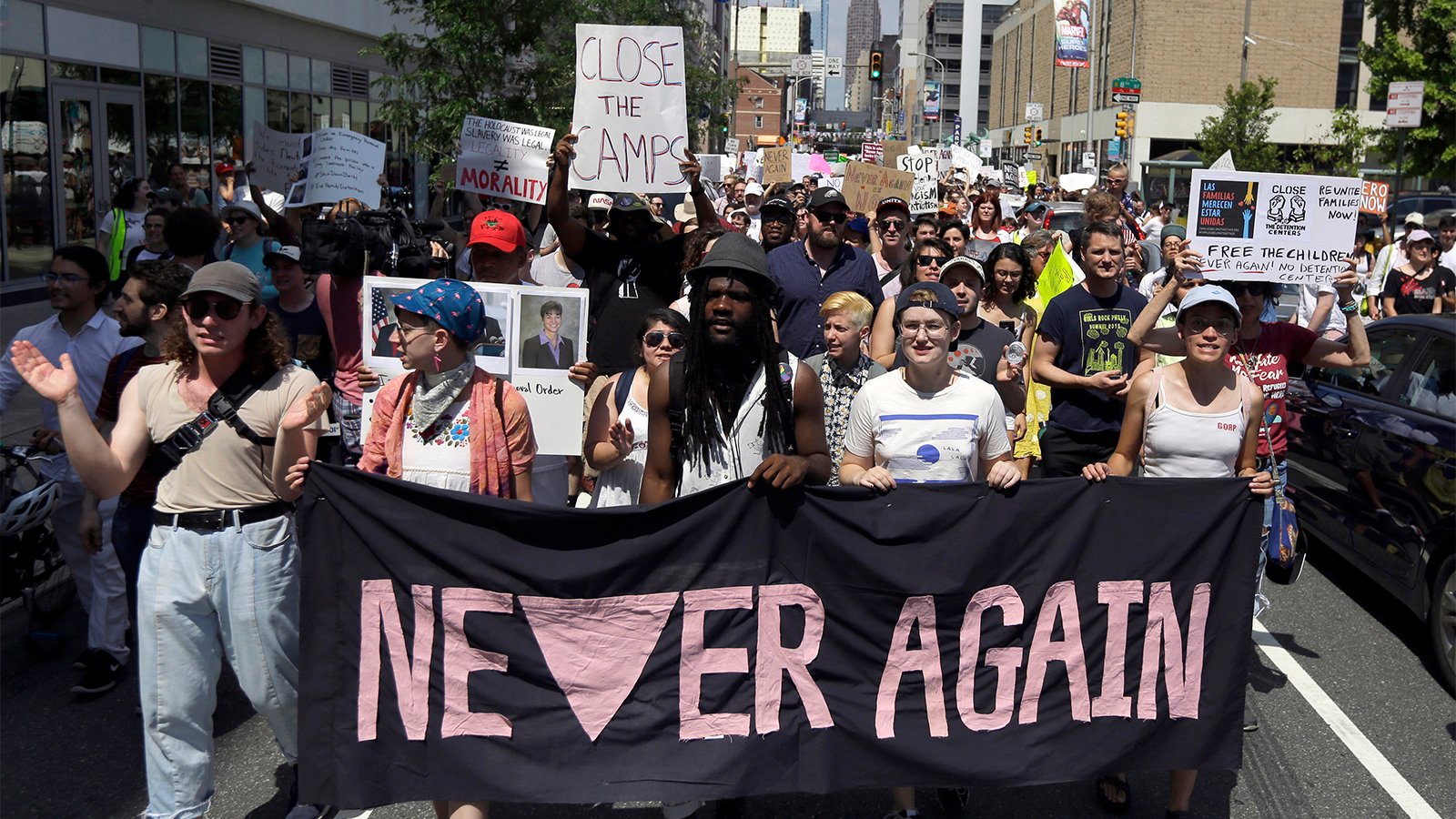 Protesters assembled by a majority Jewish group walk through traffic as they make their way to Independence Mall on July 4, 2019, in Philadelphia. Hundreds gathered during the city's traditional Fourth of July parade to protest the treatment of immigrants and asylum-seekers. (AP Photo/Jacqueline Larma)
October 12, 2019
Mark Silk

(RNS) — On Rosh Hashana, my Conservative synagogue put out postcards addressed to House Speaker Nancy Pelosi, protesting the Trump administration's immigration policy and calling on her to support a "framework" of pro-immigrant policies.

The framework, taken from the group United We Dream, urges that immigrants be welcomed, protected "from being hunted, incarcerated, and deported," and guaranteed "the opportunity to thrive." It also opposes the idea of "comprehensive immigration reform."

The cards were provided by T'ruah, a nonprofit organization whose tagline is "The Rabbinic Call for Human Rights." We were invited to pick one up and (after the holiday) sign, stamp and drop it in the mail.

Not everyone in the congregation was happy. A few members claimed that this violated the Johnson Amendment, the provision of the tax code that bars nonprofits from engaging in electoral politics. Asked my opinion on that question, I decided to ask Marc Stern, general counsel of the American Jewish Committee, for his.

I read him the text, which twice mentions the president's name: 1) "As Jews, we ask you to resist President Trump's cruel immigration policies with all your power." And 2) "Close Trump's camps and end mandatory detention."

Stern is one of those increasingly rare birds in America: a dyed-in-the-wool centrist. The postcard's immigration agenda, he said, added up to open borders —"a losing proposition politically."

But what about my question?

"There's no Johnson Amendment problem. It's just stupid policy," he said. "The answer is clear. You can take after the Trump administration’s policies as much as you want. Even during the election it wouldn’t be a problem."

I rather doubt, however, that this answer will mollify my unhappy fellow congregants. Their expressed fear, that our synagogue will (God forbid) lose its nonprofit status, is, I venture to say, more pretext than bona fide. What really bothers them is the opposition to Donald Trump that taking such a position signifies.

"I am DEEPLY offended that you would bring such a divisive issue as politics into the synagogue, ESPECIALLY during these days of introspection where we examine our OWN shortcomings and not those of others," one of them wrote to our rabbi.

To his missive he appended, somewhat contradictorily, "Many Americans Need to Atone for Their Sins against Donald Trump," a bill of particulars against the president's Jewish critics published in "The American Thinker" by Trumpist Rabbi Aryeh Spero.

Let's just say that the latter is anything but an examination of Spero's own shortcomings.

In response, our rabbi apologized for giving offense, but stated her belief that Trump's immigration policies are "cruel and contrary to Torah and our experience as Jews." That view is the position of the synagogue's leadership, she wrote, concluding, "I do not preach politics (personal or otherwise) from the pulpit. I teach Torah. I believe learning has real world implications. Torah should move us to think. To reflect. And to act."

As for me, as loathsome as I find Trump's immigration policies, I'm pretty much in agreement with Marc Stern. I've chosen not to sign the T'ruah postcard and mail it in.