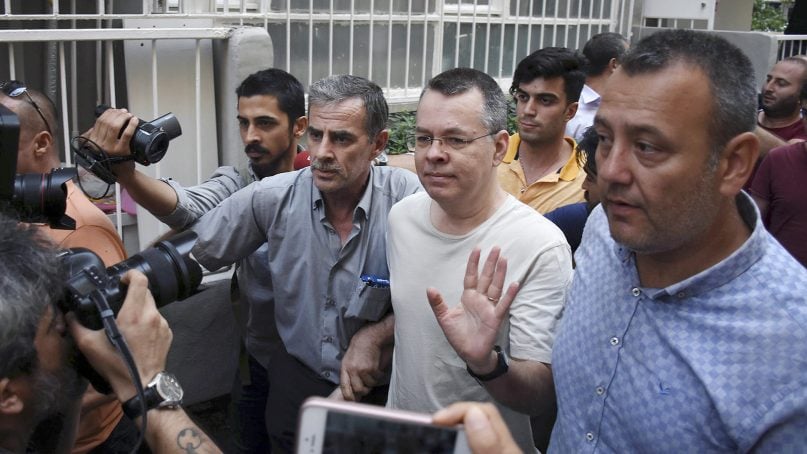 Andrew Brunson, center, waves as he leaves a prison outside Izmir, Turkey, on July 25, 2018, to go to house arrest. (DHA via AP)

(RNS) — Andrew Brunson lived in Turkey for a quarter-century starting churches and helping refugees. His new book, “God’s Hostage: A True Story of Persecution, Imprisonment, and Perseverance,” tells the story of his last two years in the country, spending months in a cramped cell built for eight with as many as 21 others.

Detained in October 2016 by the Erdogan government, which said he sympathized with the dissident Gulen movement, Brunson became the focus of a campaign by U.S. politicians and Christian leaders for his release. After being freed a year ago, Brunson has made public appearances at the State Department’s religious freedom summit in July and most recently over the weekend at the Values Voter Summit, where he and Family Research Council President Tony Perkins prayed for President Donald Trump.

In an interview with Religion News Service before Turkish forces began their recent assault on Kurds in Syria, Brunson, 51, spoke of his appreciation for his freedom, his depths of despair during his detainment and his continuing concern for the people of Turkey. 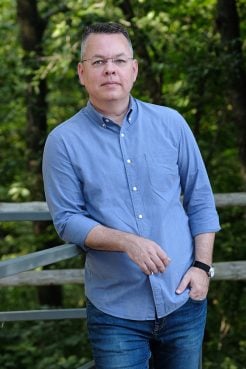 A year after your release, how are you feeling and what, if any, ministry work are you involved in now?

It is wonderful to be free. I’m enjoying life. I’ve enjoyed time with my family, with my children, with my wife. So yes, a year later I’m doing great. As for what I’m doing, we still want to be involved in the Muslim world and telling people about Jesus. I don’t think that we will be directly starting churches anymore. But we would like to help people who are basically the next generation of church leaders in that area.

When you were first detained you thought you were going to be deported. What changed?

Very early on, when they were processing our arrest, the person processing us received a phone call and, accordingly, ticked the box on our processing form that said that we were part of a terror group or supporting a terror group. And so that changed everything. It showed their intention to not simply deport us but to take it to a very different level. I think that the reason they kept me — they released Norine (Brunson’s wife) after 13 days — I think they kept me initially to intimidate other missionaries or intimidate other church leaders.

RELATED: Brunson at religious freedom summit: ‘It’s wonderful that I can be here in person

I think by the end of the second month, the very top of the political leaders, the president of Turkey, became involved at that point and they made a decision to hold me, to use me for leverage.

As your wife departed, you called her “the persistent widow.” How did she help you from outside prison during your long stay within it?

When I said “Be the persistent widow for me,” that refers to a parable of Jesus where there’s a widow who cannot receive justice from a corrupt judge, but because she’s so persistent and insists, he at last gives her justice. And I was saying, be that for me, be persistent, don’t give up. And she was truly persistent. She tried in so many ways, with every diplomatic means that was possible, contacting political leaders. And so she was fully engaged and she did not give up and I’m so grateful for that. You wrote that in some of your letters where you wrote “the Lord,” the prison authorities said you were speaking not of God but of Fethullah Gulen, the U.S.-based Islamic cleric who you were accused of supporting. What did you know of Gulen prior to your detention?

I had never met anyone who was part of his movement. I never met what I would call a Gulenist that I was aware of in my life. And so when they accused me of being part of his movement, I mean, they knew it wasn’t true. (The Gulenists) are trying to win people to Islam and I’m trying to win people to follow Jesus, so the idea that we would be working together is just ridiculous.

You described times of emotional and spiritual breakdown. When did you reach your darkest time in prison and how did you overcome it? 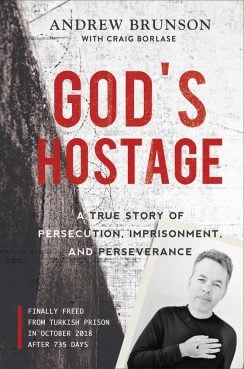 There were several very low points. Sometimes I was in a very crowded, an overcrowded cell, but even so I was isolated, especially by my faith. I was the only Christian and I had many questions and doubts and I had no one I could talk with or who could correct me or who could encourage me.

So I had periods where I was suicidal, where I lost all hope. I was in despair and had frequent panic attacks. What made a huge difference for me was the prayer of many people, knowing that they were praying for me. And I began to focus myself on God and fight for my faith. I became aware that I could do very little to fight for my freedom, but I thought, I’m losing my relationship with God in this terrible environment and I need to focus because if I lose this, then I’ve lost everything in my life. I had to cooperate with God’s grace. As I took steps with my will and forced myself, not with my emotions, but making a choice, I’m going to look to God. Then he began to rebuild me.

You were in an overcrowded cell with Muslim men and later shared a cell mostly with one Muslim man. Did you learn unexpected lessons from the people of another faith who were your cellmates?

I got to know their practice of Islam pretty well. It’s like I got a post-grad degree in their practice of Islam. I certainly admire my cellmate Nejat. He’s the one I was with in maximum security. There were times when he encouraged me, just saying, “Don’t look to man, what man can do for you, to this politician or the other. When God determines you come out, then you come out.”

And it was good to hear that reminder. And the men I was with, many of them were very sincere Muslims. And something that was underlined for me, that I already knew but I saw it in practice, is the importance of having encouragement, from brothers in the faith. And I was isolated because I didn’t have anybody from my faith.

You got to a point in your court case where your fellow inmates would call you over to the TV to see what was being reported about you. What was that like, to be the center of such attention? And was there something in particular that you heard that gave you hope?

No. It was actually very frightening because in Turkey over 90% of the media is tied to the government, to the current regime. It was a propaganda campaign and they were whipping up all of Turkish society to hate me, to see me as a traitor, as someone who hates Turks and I became a real hate figure in the country. So that was scary. 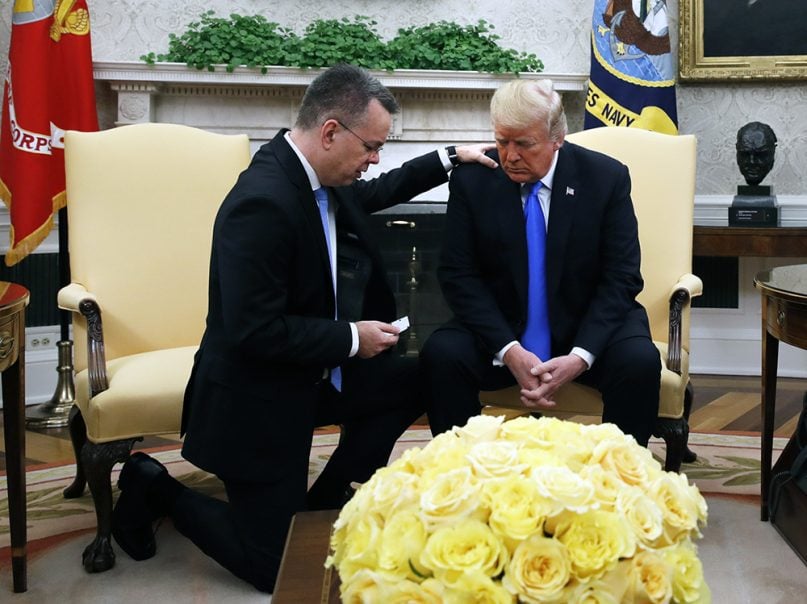 President Donald Trump prays with American pastor Andrew Brunson in the Oval Office of the White House on Oct. 13, 2018, in Washington. Brunson returned to the U.S. around midday that day after being freed the previous Friday following nearly two years of detention in Turkey. (AP Photo/Jacquelyn Martin)

You wrote that when President Trump invited you to the Oval Office, he offered you a seat in the same chair that President Recep Tayyip Erdogan had occupied while you were detained. What was that like and have you been in touch with President Trump since that day?

President Trump asked for my release in those chairs and he was denied. Erdogan made some political calculations, and refused to release me. And so then after that summit, they held me another 17 months. So I thought this is a real vindication. It’s just the way God can flip things, from being in a Turkish court, convicted of terror falsely, to then being in the Oval Office a day later.

Some of the people involved in your release had ties to the Evangelical Presbyterian Church. Can you describe a couple of those connections and how much of a difference they made in your safe return? 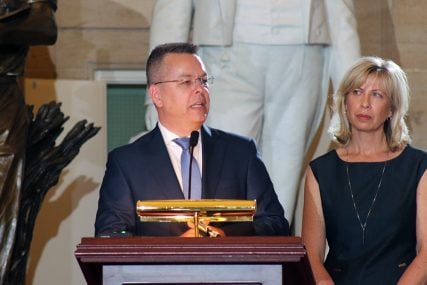 Andrew Brunson and his wife, Norine, address a National Day of Prayer event at the Capitol on May 2, 2019, in Washington. RNS photo by Adelle M. Banks

There aren’t that many, but there are some key people. So the secretary of state, Mike Pompeo, I think, was a deacon in (a church that has since affiliated with) the EPC. If I say it was special treatment for us, I don’t think that’s correct. But our case had a very high profile. There was a lot of interest in it. And I believe that God was in this. The charge d’affaires, who was the U.S.’s top diplomat in Turkey for much of my imprisonment, Phil Kosnett, he actually was a member of our home church in Montreat, North Carolina. We had never met, but he was a member. And I just thought, wow, God really sets these things up.

But there was so much. President Trump’s participation was unprecedented, the amount of time he spent on this and the number of times he engaged on it. But then I look over at the Congress. There were several letters that were sent from the Senate, but the last one to Erdogan had 66 senators who signed. That level of bipartisanship on an issue is very unusual.

When you spoke on Capitol Hill earlier this year, you said you hope to return to Turkey someday. Is that still a plan for you?

God put some of his love for Turkey into our heart. So it’s not so much an emotional attachment as saying we are committed to see blessing for Turkey because of God’s love. And so we have a desire to go back. We cannot go back under this regime, obviously, but at some point we hope that the conditions will be right and that we will be able to go back and at least visit and see our brothers and sisters there who we love very much.