(RNS) — All the available hard evidence — not to mention a look around many houses of worship — shows that religious congregations are declining.  As congregants increasingly head for the exits, younger Americans, who say they have no religion, are far less likely than previous generations to join a church.

But a new nationally representative study from the Lake Institute on Faith and Giving at Indiana University’s Lilly Family School of Philanthropy finds that revenue is not necessarily declining along with attendance. In fact, the study finds that nearly half of America’s estimated 380,000 congregations saw an increase in giving from three years ago.

The study, which included a representative sample of 1,231 congregations — including churches, synagogues, mosques and other houses of worship  — found that 48% of congregations saw an increase in revenue, 35% saw a decrease and 17% said giving remained the same.

The median annual revenue for a religious congregation was $169,000 in 2017. (The study was fielded in 2018 and consisted of a questionnaire completed by the congregational leader, or financial administrator.)

The news about giving is surprising given that the study found that participation remained flat. In the study, 39% of congregations reported an increase in participation, 38% reported a decrease and 23% saw no change. “Change in participation by religious tradition.” Graphic courtesy of NSCEP

The study, titled “National Study of Congregations’ Economic Practices,” found that Roman Catholic churches face the greatest challenges, with more than half of all parishes declining in both size and revenue over the past three years. Mainline Protestants fared slightly better. While participation remained flat in mainline churches, 48% reported growth in revenue and another 14% reported revenues had remained the same.

White evangelicals and black Protestants fared best, with 62% of African-American congregations reporting an increase in regularly participating adults and 59% reporting increases in revenue.

“We’re not hiding the fact that there are many congregations experiencing decline, or that it’s a major success to be simply maintaining,” said David P. King, director of the Lake Institute and a co-director of the study.  “But despite a narrative of decline for religiosity in America, there’s a wide diversity of what’s happening. A decline in participation does not necessarily equate with (a decline) in finances.”

Or as the study succinctly states: “Among congregations that are declining in attendance, there is not necessarily an automatic corresponding decline in revenue.”

The reasons for the seeming anomaly are complicated and vary from one congregation to another. It may be that fewer people are shouldering a greater share of the congregation’s donations. Or it could be that congregations are finding alternative streams of revenue, from renting their facilities for weddings or conferences to operating schools or day care centers. Others saw revenue from bequests or gifts, or, in the case of more established historic churches, from their endowments. (The study found an average of 34% of congregations have endowments.)

But there may be a simpler explanation, said Brad Fulton, a sociologist who co-directed the study. If the old maxim that 20% of a congregation’s participants give 80% of donations remains true, it might explain why giving has stayed steady or increased.

“The people who are really committed tend to give a lot more,” Fulton said. “If you remove the people who don’t give much, the average amount per person is going to go up.” 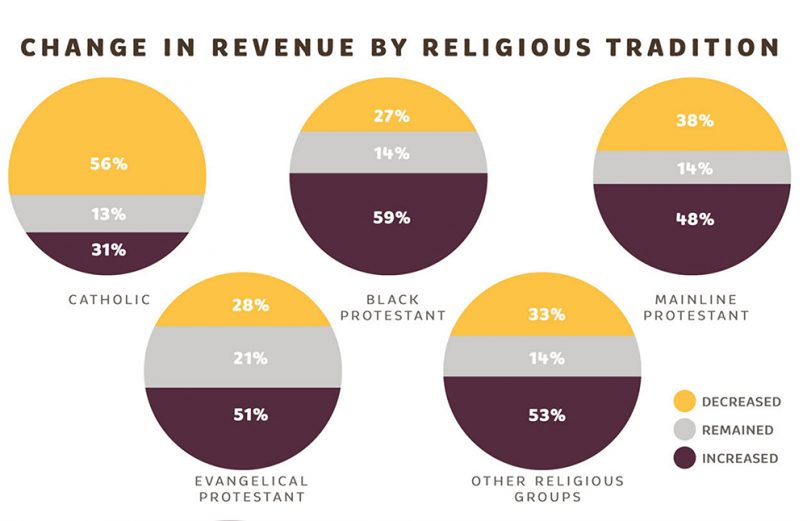 “Change in revenue by religious tradition.” Graphic courtesy of NSCEP

In 92% of congregations, passing the offering plate on Sunday accounts for the majority of a church’s income.

Congregations spend nearly half of their revenues on paying religious leaders and staff, another 23% on their facilities (including maintenance and mortgages) and about 16% on programs and dues.

Congregations spend 11% on missions, or outreach outside of the walls of the building, whether locally, nationally  or internationally, though the study found that the largest share of that money is spent locally, within the community.

That’s significant, said Fulton, who estimated that the nation’s 380,000 congregations spent $10.6 billion annually on missions, service and charity, including, for example, help with disaster relief. (The average amount of money congregations allocated to missions and benevolence in 2017 was $27,702.)

But if there’s one area where congregations could improve it was in the area of asking for money, the study concludes. Most congregational leaders don’t teach about the theology of giving, hesitate to ask for money and don’t do a good enough job of thanking those who give.

“Nonprofits are being much more explicit about the ask and the acknowledgment of the contribution and storytelling and impact/outcome measures,” King said.

Some religious groups understand the challenge. Larry Strenge, who coordinates a program for the Evangelical Lutheran Church in America focused on cultivating generosity, said he encourages pastors to see raising money as part of their spiritual practice.

If they neglect to do that they might miss out on a promising future, he said, noting that many older congregants are now in a position to give more at exactly the time when congregations need it most.

“There’s a tremendous transfer of wealth taking place,” Strenge explained. “What the study shows is exactly what we’re observing — we need to position ourselves to be recipients of that transfer of wealth and we have not done a good job of that.” 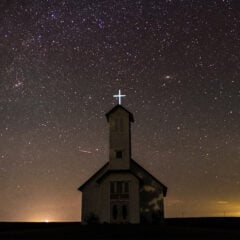