(RNS) — Last week Attorney General William Barr took time out from the Donald Trump protection racket to deliver a speech at the Notre Dame Law School that might have been titled, with apologies to German theologian Friedrich Schleiermacher, “A Defense of Religious Liberty Against Its Secularist Despisers.” The speech showed Barr for the culture warrior he is, in that hybrid traditionalist Catholic/evangelical Protestant mode we increasingly see these days.

According to Barr, religion has been under “increasing attack” for half a century, alongside the “growing ascendancy of secularism and the doctrine of moral relativism.” It was of course different at the dawn of the Republic. Echoing the evangelical huckster historian David Barton, Barr contended that the founders of the country were Christians committed to “the Judeo-Christian moral system.”

The moral precepts of the latter, by Barr’s account, enjoyed “the guidance of natural law — a real, transcendent moral order which flows from God’s eternal law — the divine wisdom by which the whole of creation is ordered. The eternal law is impressed upon, and reflected in, all created things.” Thus, he continued, “From the nature of things we can, through reason, experience, discern standards of right and wrong that exist independent of human will.”

This explanation puts forward the unvarnished neo-scholastic conception of natural law that reigned supreme in pre-Vatican II Catholic thought. If you think about it for a moment, the rise of secularism shouldn’t be a problem under this conception, since all rational beings, even hard-bitten secularists, are equipped to arrive at the same moral standards.

But that’s not how Barr sees it. His view is that secularists “dismiss this idea of morality as otherworldly superstition imposed by a kill-joy clergy.”

In other words, I guess, if you don’t believe in the old-time Catholic version of natural law, your reason won’t get you to the right Judeo-Christian places.

Actually, as Boston College’s Mark Massa makes clear in his recent book, “The Structure of Theological Revolutions,” these days even conservative Catholic theologians reject the old-time version of natural law — and that’s to say nothing of Jewish, Eastern Orthodox, Protestant, Muslim and Buddhist thinkers.

At a conference held Monday (Oct. 14) at the Greenberg Center for the Study of Religion in Public Life to reflect on the implications of Massa’s book for religious advocacy in the public square, the limits of neo-scholastic natural law in time, place and tradition could hardly have been clearer.

Which isn’t to say that various religions don’t hold to the idea that there are certain laws incumbent on all people at all times. Within the Judeo-Christian system to which Barr repeatedly referred, these are the seven so-called Noahide laws that God reportedly handed down to Noah after the flood: the prohibitions of idolatry, of the improper use of the name of God, murder, sexual immorality and theft; the injunction to establish laws and courts; and the ban on eating meat from a living animal.

Now, however, Barr claimed that, because of the growth of secularism, “Virtually every measure of social pathology continues to gain ground.”

To evaluate that claim, I propose we consider the middle three Noahide laws since the beginning of the steep rise of the nones (those who, when pollsters ask, “What is your religion?,” say, “None”) from 8% of the American population in 1990 to a quarter today.

Over the three decades, the U.S. murder rate has gone from 9.4 per 100,000 people to 5.0. The robbery, burglary and vehicle theft rates have declined by two-thirds; larceny theft by half. You’d think the nation’s chief law enforcement officer would be aware of these statistics.

As to sexual immorality, Barr made a big deal of the rise in the rate of out-of-wedlock births from 8% in 1965 to 25% in 1992 to over 40% today. It’s worth noting, however, that the Hebrew Bible does not condemn sex outside of marriage, apart from adultery and incest. (To be sure, Paul says it’s better to marry than to burn.) Meanwhile, the U.S. divorce rate has declined from nearly 5% to under 3%.

In short, based on the most traditional Judeo-Christian moral standard we have, it’s hard to see the “moral chaos” in contemporary American society that Barr does, much less to blame secularism for it. If one wasn’t afraid of confusing correlation with causality, one would be tempted to credit rising secularism with improving social morals.

Be that as it may, Barr went on to argue, as American evangelicals traditionally have, that the way to make society better is “by focusing on our own personal morality and transformation.” But because the “new secular religion teaches macro-morality,” by contrast, “one’s morality is not gauged by their private conduct, but rather on their commitment to political causes and collective action to address social problems.”

It is hard to square this view with Catholic social teaching over the centuries, and particularly with Pope Leo XIII’s 1891 encyclical “Rerum Novarum,” a charter of collective action to address social problems if ever there was one. I expect there were plenty of eyes rolling in the Notre Dame auditorium when Barr said that.

So what was the purpose of this ill-informed, ill-argued rant? I’d say it’s to justify a new federal aggressiveness in assuring space for religious traditionalists to do their thing, whether that’s discriminating against LGBT people or gaining access to public funds.

At the outset of his talk, Barr told his audience that he’s set up an interagency task force that meets regularly to “keep an eye out for cases or events around the country where states are misapplying the establishment clause in a way that discriminates against people of faith, or cases where states adopt laws that impinge upon the free exercise of religion.”

At the conclusion, he declared:

We must be vigilant to resist efforts by the forces of secularization to drive religious viewpoints from the public square and to impinge upon the free exercise of our faith. I can assure you that, as long as I am attorney general, the Department of Justice will be at the forefront of this effort — ready to fight for the most cherished of our liberties — the freedom to live according to our faith. 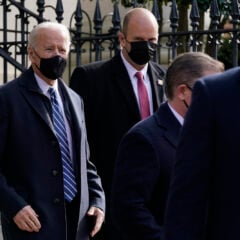 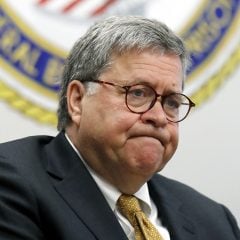