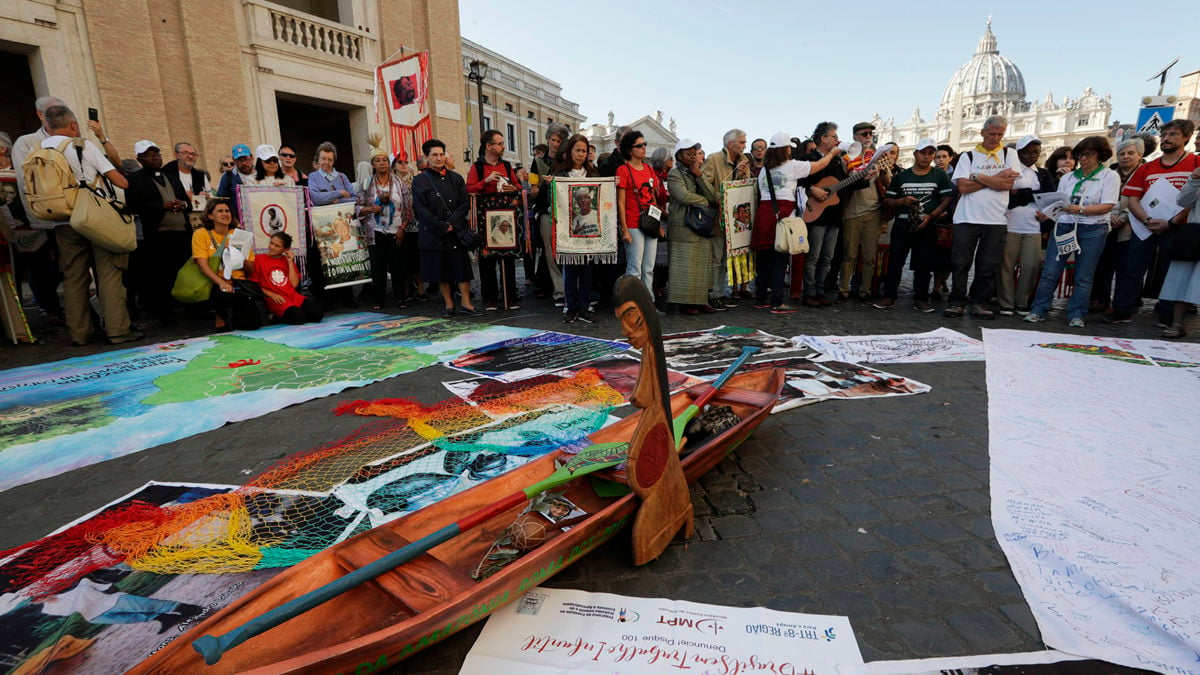 Members of Amazon indigenous populations pray at the end a Via Crucis (Way of the Cross) procession from St. Angelo Castle to the Vatican, Saturday, Oct. 19, 2019. Pope Francis is holding a three-week meeting on preserving the rainforest and ministering to its native people as he fended off attacks from conservatives who are opposed to his ecological agenda. (AP Photo/Andrew Medichini)
October 21, 2019
Claire Giangravé

VATICAN CITY (RNS) — Amid the buzz surrounding the last week of this month's summit of bishops on the Amazon, the debate surrounding a small statue has captured Rome.

The two-foot-high wooden carving of a naked pregnant woman was presented as “Our Lady of the Amazon” to Pope Francis on the first day of the synod (Oct. 4), at a tree-planting ceremony at the Vatican Gardens.

A video of the event immediately created a kerfuffle among conservative Catholics, who criticized it as a pagan symbol and an attempt by the current pontificate to undermine the Catholic faith. Liberal groups defended the carving, which was said to represent the Incan goddess Pachamama, as an acknowledgement of the culture of the indigenous people in the Amazon.

The Vatican press department dismissed the notion that the pope was endorsing paganism, but in a synod that has raised questions of married priests and infusing indigenous culture into Catholic rites, Pachamama nevertheless immediately became a symbol of the ideological wars surrounding the summit.

Images of the carving have appeared around Rome, including at a procession related to the synod late last week.

On Monday (Oct. 21), a new video made the rounds online showing a man stealing four versions of the statue that were on display in a side altar of the Church of Santa Maria in Traspontina in Rome's Borgo district. The video then cuts to a bridge near the landmark Castel Sant’Angelo, where the man lines up the figures and knocks them into the Tiber River.

“Stealing something like this is clearly a stunt,” said Paolo Ruffini, the head of the communications department, while answering questions from the press. “The theft comments on itself, without my input.”

The first news sites to report the incident were the conservative Catholic outlets Church Militant and LifeSite News, which have often portrayed the synod and Pope Francis as “heretical” in their reporting. 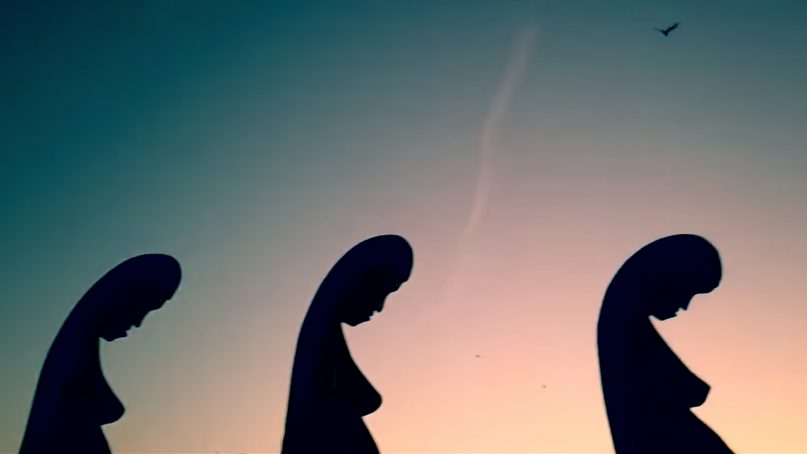 A vandal displays several controversial carved female figures before knocking them into the Tiber River in Rome. Video screengrab

It is unclear now what — if any — efforts are being made to salvage the carvings, but the vandals have succeeded in pushing the conservative opposition to Pope Francis' agenda to the fore.

Asked about the controversy, Cardinal Christoph Schönborn, the head of the Austrian bishops conference, noted that the friction is nothing new.

“I am old enough to remember the pontificate of Paul VI,” he said at the Monday press conference, referring to the pope who oversaw the foundational changes of Vatican II. The opposition to Francis’ predecessor, he said, was “very similar.”

“Every pope has his own story and character," Schönborn added, “but it’s always the pope, and it’s very clear to me to be loyal to the pope. Full stop.”