SAN DIEGO (RNS) — For more than a decade, the Rev. John Fanestil, a United Methodist minister, has held a Sunday service at Friendship Park, a historic meeting place on the U.S.-Mexico border overlooking the Pacific Ocean between San Diego and Tijuana. While Communion is celebrated each week, Fanestil began the nonsectarian Christian ministry to help preserve the park as a public space where family members separated by their immigration status can interact, even if their interaction takes place through border fencing.

But in recent months, Border Church, or La Iglesia Fronteriza, has blossomed into a multifaith movement that includes a group of Muslims, who call themselves the Border Mosque, that has been joining Fanestil in prayer since April.

On Sunday (Oct. 27) the two groups will co-host “Pray Beyond Borders,” a binational day of prayer that will include indigenous, Muslim, Christian and Jewish leaders, as well as civil rights activist Linda Sarsour.

The event comes a year after new U.S. government restrictions took effect at the site, limiting the number of people allowed in the park to 10, down from 25, with federal immigration officials rotating people in and out every 30 minutes, Fanestil said.

Dustin Craun, executive director of the San Diego branch of the Council on American-Islamic Relations, said the interfaith work at Friendship Park “is primarily about the families and keeping that space open.”

“All the different administrations have further militarized Friendship Park and have come close to closing it,” said Craun, who helped organize Border Mosque and Sunday’s event. 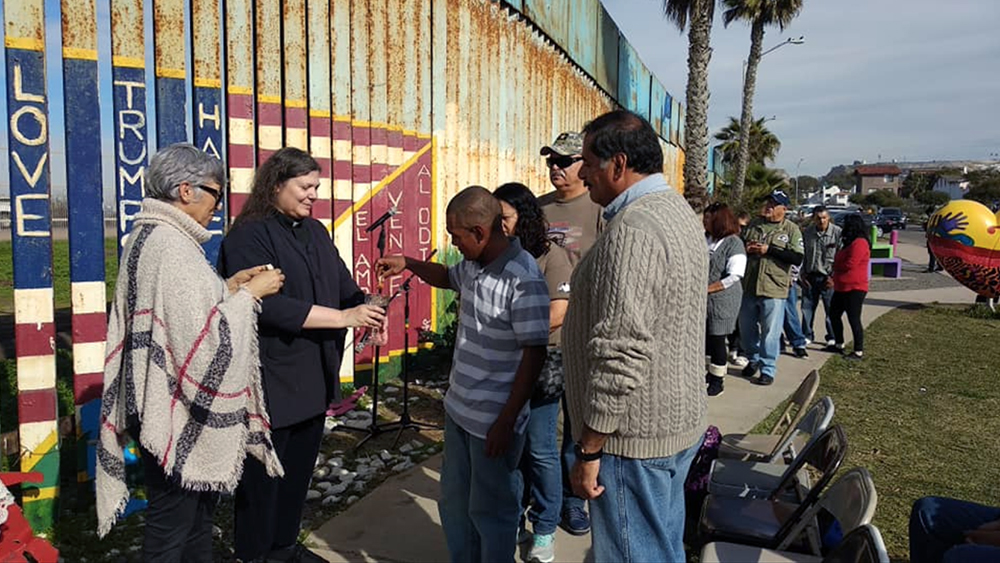 Communion is celebrated at Border Church, or La Iglesia Fronteriza, on the Tijuana side of the border in January 2019. Photo courtesy of Border Church

Fanestil said he wants Pray Beyond Borders to send a message that the U.S.-Mexico border “is a very human place.”

“It’s a place of human encounter, of friendship, of peaceful relationship, of communion, of solidarity,” said Fanestil, a pastor at First United Methodist Church of San Diego. “This is what the daily life on the border is like for the vast majority of people.”

Fanestil, 58, was born and raised in San Diego but only began visiting Friendship Park regularly in 2004, after a decade away from the city. Among his postings at United Methodist churches across California was the border city of Calexico, in rural Imperial County. There he preached in both English and Spanish and developed a connection with residents of the borderland. In 2008, he began serving Communion at the park as the U.S. Department of Homeland Security was gearing up to add the new border fencing.

The park was shut down as construction took place. Fanestil described it as a contentious time, recalling a day in 2009 when border agents made a human wall to block access to the park.

About three years later, Friendship Park, which was dedicated in 1971 by then-first lady Pat Nixon at a time when the border was marked by a few strings of barbed wire, reopened with limited hours over the weekends. It is now open between 10 a.m. and 2 p.m. on Saturdays and Sundays.

Throughout the years, the binational park has hosted yoga, musical concerts and picnics, Fanestil said. Deported veterans, church groups and lawyers also meet at the border. The interfaith effort, Fanestil said, “is just another expression of this multidimensioned solidarity.”

The latest collaboration with Border Mosque, he said, “is just another way that people are sharing the space on the border.”

Craun has also been inspired by the border.

He has worked in El Paso, Texas, and Juarez, across the border, volunteering for a time at Annunciation House, a Catholic nonprofit in El Paso that helps refugees. About five years ago, he co-founded MPower Change, a Muslim-led social and racial justice organization, where he worked with Sarsour and other activists. Among MPower’s achievements is successfully advocating for the Louisville International Airport in Kentucky to be renamed after Muhammad Ali, a Louisville native.

Craun moved to San Diego earlier this year, he said, with the idea of beginning “some type of binational prayer.” When he learned of Border Church, he contacted Fanestil and Border Mosque was born soon afterward. Craun has produced a short film about the work Border Church has done to protect the part of Friendship Park where families meet. The film also documents how Border Church inspired the Muslim community “to stand for justice in the borderlands,” he said.

In the past six months, Fanestil said, the two groups have gotten to know each other well.

“It really just became a shared, community-spirited feel of occupying this historic space and celebrating our solidarity with people across the various dividing lines that would keep us apart,” he said.

Mayte Gutierrez, a volunteer with the nonprofit Latina Muslim Foundation, said she has been struck by the diversity of those living along the Mexican border. She has seen immigrants from Honduras, Guatemala, Mexico, Nigeria and Haiti.

“It’s been an eye-opener,” Gutierrez said. “I feel like I’m in America when I cross the border because I see so much diversity.”

Sonia Garcia, founder of the Latina Muslim Foundation, said that the Border Mosque is a way for Muslims, who have faced immigration difficulties since 9/11, to expand their activism. Muslim voices, she said, need to “be heard in all borders,” and to  stand for deported people and separated families no matter their national origin.

By uniting in prayer with others, Garcia hopes to combat racism and other prejudices.

“If we don’t unite, there will be no change,” Garcia said. Since April, groups of Muslims have joined Border Church in prayer along the U.S.-Mexico border near San Diego. They gather on the last Sunday of the month and cross to the Mexico side for what’s referred to as Border Mosque. Photo courtesy of CAIR-San Diego