LOS ANGELES (RNS) — The Interfaith Solidarity Network in the San Fernando Valley is holding its third annual unity march on Sunday (Oct. 27), just weeks after a Northridge synagogue was struck with vandalism.

Cohen’s synagogue was found vandalized on Sept. 18 with a message on a welcome sign that declared “six million $ was not enough” — an apparent reference to the 6 million Jews who were killed in the Holocaust, the Interfaith Solidarity Network said in a statement. The police investigated the incident as a possible hate crime.

Temple Ahavat Shalom will be participating in the solidarity march this Sunday. To Cohen, the march is an event where “similarities are celebrated and differences are respected.”

“We march because we know we can learn form each other,” he said.

The 1.4-mile march will begin at 2 p.m. at Valley Beth Israel in Sun Valley. Participants will make stops along the way at St. Genevieve Catholic Church and Panorama Presbyterian Church. Muslims for Progressive Values, the Sikhs of Los Angeles and Radha Govind Dham Los Angeles will be participating.

Last year, the march had been planned in advance on Oct. 28, which coincidentally took place a day after the mass shooting at the Tree of Life synagogue that left 11 people dead in Pittsburgh. Hundreds turned out for the event. 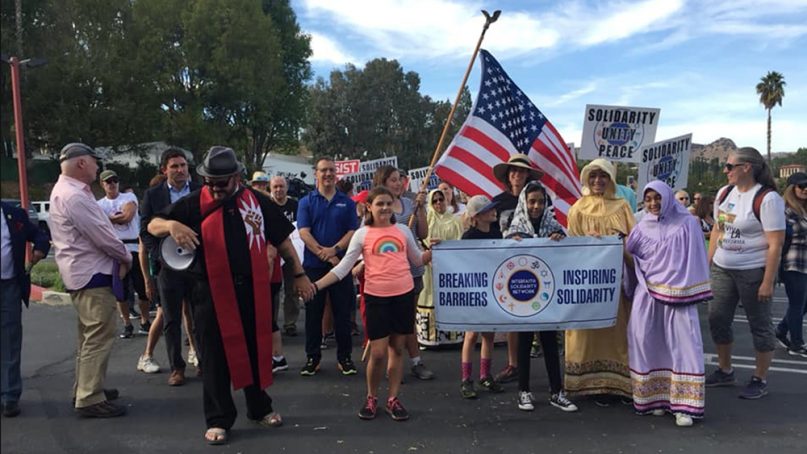 “It’s our most visible expression of who we are,” Jerbi said.

The Interfaith Solidarity Network was created more than two years ago, after President Donald Trump began announcing plans for a travel ban on people from Muslim-majority countries. It boasts a network of more than 40 faith-based groups.

The group advocates for climate action and environmental justice and also assists the homeless community. In response to violent acts against houses of worship, the network hosts community forums and creates opportunities for service. A forum concerning the vandalism at the Northridge synagogue will be held in November.

Jerbi, who came to Los Angeles from Milwaukee about three years ago, said it can be challenging in the LA area to connect with others.

"I think we celebrate Los Angeles as a place of incredible diversity and yet we still operate in isolation," he said. 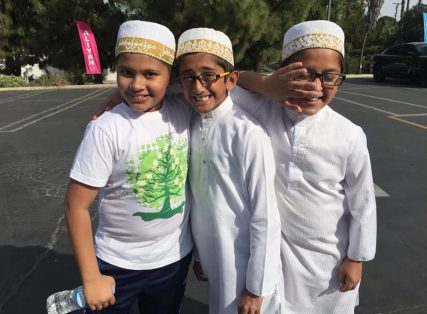 "Because we have established ourselves as a significant place for people of faith and goodwill to come together, I think the valley really looks to ISN to not only respond to the negativity in the world, but also to create opportunities to really build relationships and break down barriers," he said.

Rabbi Jim Kaufman, 75, with Interfaith Solidarity Network, recalled having his synagogue vandalized in 1982. Red and black swastikas were plastered all over the building, he said, and profane messages were written on the back and front of the synagogue.

Kaufman, a rabbi emeritus of Temple Beth Hillel in North Hollywood, acknowledged the vandalism at the Northridge synagogue but also recognized that other faith groups are experiencing similar occurrences.

"This stuff doesn't happen just to Jews," Kaufman said. "It's happening to everybody. Which is why people of faith need to band together and say 'We need to stand for each other.'"

(An earlier version of this story included an outdated title for Steve Jerbi.)