Participants believe it was the first time a formal Muslim prayer was shared across the U.S.-Mexico border wall.

“There is no barrier between us and the heavens today,” said Suleiman, founder of the Yaqeen Institute for Islamic Research in Irving, Texas, who stood on the U.S. side of the wall.

Suleiman delivered a message of solidarity with migrants and deportees at “Pray Beyond Borders,” a binational day of prayer that invited Muslim, Christian and Jewish faith leaders. People communicate with one another through the U.S.-Mexico border fence in Tijuana. RNS photo by Alejandra Molina

The event was held to commemorate the six-month anniversary of Border Mosque, a group of Muslims that meets for prayer at the border on the last Sunday of the month. Those prayers coincide with Border Church, or La Iglesia Fronteriza, a Sunday service held for the last decade at the border and led by the Rev. John Fanestil, a United Methodist minister.

Since April, the Border Mosque group has joined Fanestil in prayer once a month.

“We hear you and we will continue to strive for you and to pray for you,” said Suleiman, addressing those on the Mexico side of the wall. “ … We will not allow our prayers for you to be restricted to this physical space.

“We were created by one God and that one God has given us all dignity and has called us to recognize that dignity in each and every one of us,” he said.

Friendship Park was dedicated in 1971 by then-first lady Pat Nixon at a time when the border, as the local news site Voice of San Diego described, consisted of “just a few strings of barbed wire.” The park is open between 10 a.m. and 2 p.m. on the U.S. side Saturdays and Sundays. Last year new U.S. government restrictions took effect at the site, limiting 10 people in the area at the same time, with federal immigration officials rotating them in and out every 30 minutes. Fanestil said 25 people used to be allowed in the area.

People visiting loved ones from the U.S. side are secured between two walls.

About a handful of people Sunday joined Suleiman in midday prayer on the U.S. side, as Fanestil stood next to them. About two dozen on the Mexico side participated as passersby, food vendors and tourists looked on. Communion for Border Church resumed after the Muslim prayer. Guillermo Navarrete, a lay leader with the Methodist Church of Mexico, holds a microphone for the Rev. David Farley during Communion on Sunday, Oct. 27, 2019, in Tijuana. RNS photo by Alejandra Molina

The Rev. David Farley, director of justice and compassion ministries for the California Pacific Conference of the United Methodist Church, said he’s seen how militarized the border has become over the years.

“It’s become more restricted,” said Farley, who celebrated Communion on the Mexican side of the border on Sunday. “You used to be able to reach your hands across.”

Farley said the presence of faith communities at the border is crucial.

“I think it’s a way of saying, ‘We’re not going away. We’re not giving up,'” he said. “This is a witness forever until justice comes … I think it’s a very valuable thing to be consistently present.” 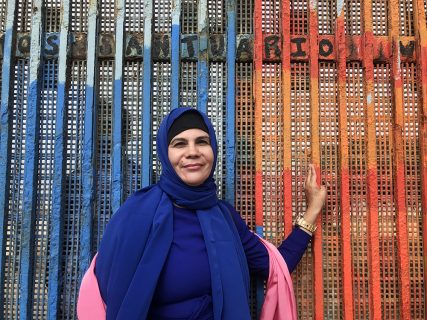 Sonia Garcia, founder of the Latina Muslim Foundation, said that the Border Mosque is a way for Muslims, who have faced immigration difficulties since 9/11, to expand their activism. RNS photo by Alejandra Molina

Sonia Garcia, who participated in the prayer from Mexico, said she believes the interfaith gathering can help remove physical barriers.

“This is historic … and it’s a miracle from God,” said Garcia, founder of the San Diego-based Latina Muslim Foundation.

There’s a lot of feelings toward the deported, toward people who are on the other side and people here. “There’s a feeling of pain, but it’s a valuable day for Muslims,” she said.

For Guillermo Navarrete, a lay leader with the Methodist Church of Mexico, the Sunday gathering was “something very impactful.”

Navarrete said the interfaith service is more than just a gathering and acceptance of different faiths.

“It opens a perspective of unity,” he said. “We’re all children of God.”

“A goal of this place is to offer peace, hope and faith to those who don’t have it — to the one who has been deported, to the migrant who doesn’t know where to go and who is being oppressed by immigration laws,” said Navarrete who ministers on the Mexico side during Border Church.

Tania Mendoza, a Playas de Tijuana resident who was deported from the U.S., said the unity between Border Church and Border Mosque strengthens the community along the dividing line.

Mendoza, 33, said she’s at the border every other Sunday to represent Dream Will Childhood Arrivals, a binational support group for people like her, who were brought to the U.S. as kids, are undocumented and later find themselves deported from the U.S. She said she hasn’t been able to see her child since she was deported nine years ago.

“You lose the dreams. You lose education. You lose resources,” said Mendoza, who went to high school in Los Angeles. “You have to start all over again.”

“When I see a Muslim community getting included and adapting to our ways … It brings a lot of happiness because we’re getting together,” she said. 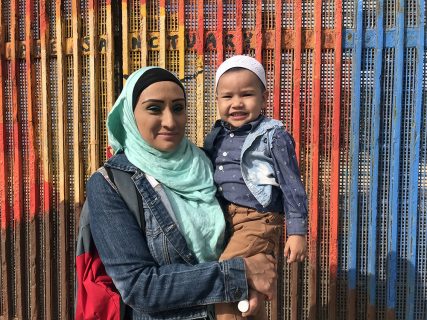 Anissa Trejo Garcia, 34, lives in Tijuana. She attended the gathering with her son, Fidel Rosas Trejo, and husband. RNS photo by Alejandra Molina

For Anissa Trejo Garcia, 34, who is Muslim and lives in Tijuana, this kind of interfaith prayer makes sense. Trejo Garcia said she became Muslim about five years ago after her husband converted.

“This gathering is important because in the end, we all believe in one single God,” she said.

“We’re all going to the same place … So it’s great for us to unite, regardless of religion and race.”