(RNS) — A prominent Southern Baptist church in southwest Florida has acknowledged that “racial prejudice” was a factor in its congregation’s decision not to appoint a black senior pastor candidate.

Pastor Marcus Hayes, a leader of Biltmore Church in Asheville, North Carolina, received 81% of the vote by “a record 3,818” in attendance Saturday and Sunday (Oct. 26-27) where the “energy and excitement was like nothing we have ever seen before,” according to an email from the pastoral staff of First Baptist Church Naples.

But an 85% vote was needed for approval, based on the church’s constitution, the staff said.

“Last week, through social media, texting, phone calls and emails, racial prejudice was introduced into our voting process,” the staff wrote in the email that was posted on The Baptist Blogger Twitter account.

“Please know that specifically your Pastoral Staff is deeply, deeply grieved,” the staff wrote. “We are grieved for Marcus and Mandy that they had to endure such vileness. We are deeply grieved that the wonderful name of our Lord and the reputation of First Baptist Church Naples was affected by this campaign against Marcus Hayes.”

Hayes, who is married to Mandy Hayes, was being considered to succeed Hayes Wicker, who announced earlier this year his plans to leave his position after 27 years.

The staffers went on to call “anyone who took part in such divisive and sinful actions to immediately confess and repent.”

Hayes, through his assistant, declined an interview. First Baptist Church Naples did not immediately comment further on the situation.

The southwest Florida congregation once included Chuck Colson, the onetime “hatchet man” for Richard Nixon who founded Prison Fellowship after serving seven months in prison as a felon who had pleaded guilty to obstruction of justice. 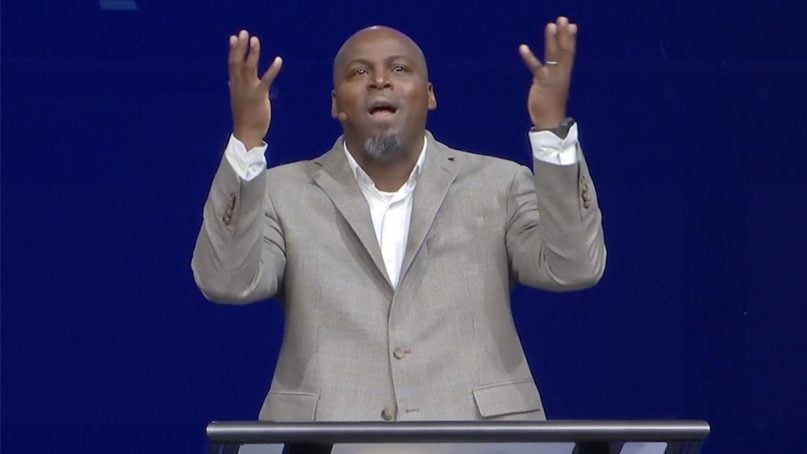 Hayes is a member of the Southern Baptist Convention’s Executive Committee and previously worked at Prestonwood Baptist Church in Plano, Texas, where former SBC President Jack Graham is senior pastor.

Graham told Religion News Service he has seen the email from the pastoral staff and is “very angry” about the outcome of the vote for Hayes, whom he has mentored.

Divisions in the church prior to Hayes’ consideration could have made it difficult to choose any new pastor — Graham said he has joked that even “Billy Graham in his prime” would have had trouble getting an 85% vote.

“However, it appears that there was racism that raised its very ungodly head in the midst of this and some false reports and just slander and flat-out lies regarding Marcus,” said Graham. “You can only conclude that sin, in effect, disrupted this whole process and the call of a good and godly man to be the pastor.”

The Southern Baptist Convention has grappled with race relations for decades before and since it passed a 1995 “racial reconciliation” resolution. That statement, adopted on the 150th anniversary of its founding in defense of slave-holding missionaries, said members of the denomination “lament and repudiate historic acts of evil such as slavery from which we continue to reap a bitter harvest.”

The Rev. Dwight McKissic, a Texas pastor who has worked to get Southern Baptists to adopt resolutions condemning white supremacy and repudiating the Confederate flag, called the outcome of the Hayes vote “Shameful!” and tweeted a suggestion that the Naples church should be disfellowshipped from the Southern Baptist Convention.

Graham said he considered the issue a matter for the local church — including possibly removing some of its members — but he doubts the SBC would disfellowship the Florida church under the current circumstances.

“They could do that but I’m sure the Southern Baptist Convention would think twice about that,” he said. “You do have … 3,000-plus members that sit on the right side of this issue.”