VATICAN CITY (RNS) — For many, Halloween is mostly a fun opportunity to slip into a spooky costume, indulge in sugary delights or let their party animal run wild. But Pope Francis on Friday invited the faithful to bring it back to basics, or rather, to cemeteries.

“In these days, when, unfortunately, messages of negative culture on death and dead people are circulating, I invite you not to neglect, if possible, a visit and prayer to the cemetery,” the pontiff said Friday (Nov. 1), after the Angelus at St. Peter’s Square.

His remarks took place on All Saints’ Day, when Christians celebrate their entire pantheon of saints the day after Halloween. On Saturday (Nov. 2), Francis will say Mass in the Catacombs of Priscilla in Rome, where the first Christians avoided persecution by huddling in damp underground tunnels, to pay homage to the many Christians who gave their life for their beliefs.

The pope’s invitation to celebrate these days “in the spiritual company of the Saints” has been coherent with his recent theme of encouraging faithful, and especially young, people to reflect on those who have passed and on the “three deaths”: the death of every instant, the death of the ego and the death of one world that gives way to a new one. 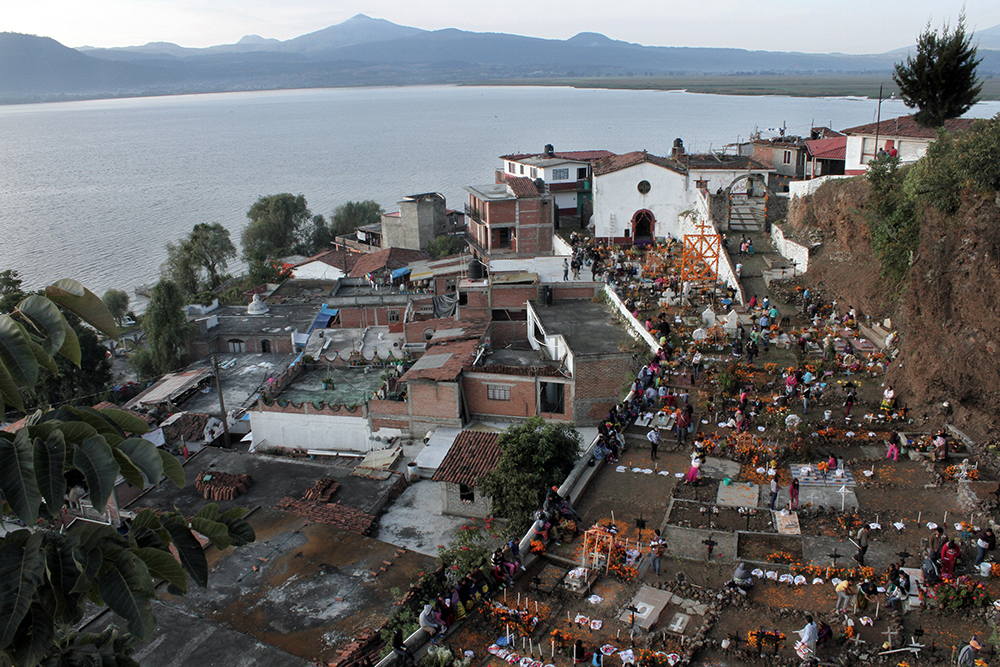 Dawn breaks over the cemetery after Day of the Dead in 2018 on Janitzio Island, Mexico. People stayed overnight at gravesites to remember the deceased. RNS photo by Irving Cabrera Torres

“In a world that worships autonomy, self-sufficiency, and self-realization, there seems to be no place for the other. Our world of plans and infinite acceleration — always speeding up — does not allow for interruptions. So, the worldly culture that enslaves us, also tries to put us to sleep so we forget what it means to stop at last,” Francis said on Halloween (Oct. 31).

These comments were relayed in a video message Francis sent to the young participants of the IV World Youth Meeting (Oct. 28-31), organized by World ORT, a Jewish education network present in over 30 countries, and by Scholas Occorrentes, the brain-child of the Argentine pontiff to promote a culture of encounter and dialogue between people in all walks of life.

The youth were gathered in Mexico City, Mexico, which will celebrate the Day of the Dead (Día de Muertos) until Saturday (Nov. 2) to honor and celebrate deceased relatives and friends.

Francis said he wishes to invite people to dwell on “the end,” especially given the interest the young people at the event displayed for the subject of death and the afterlife. 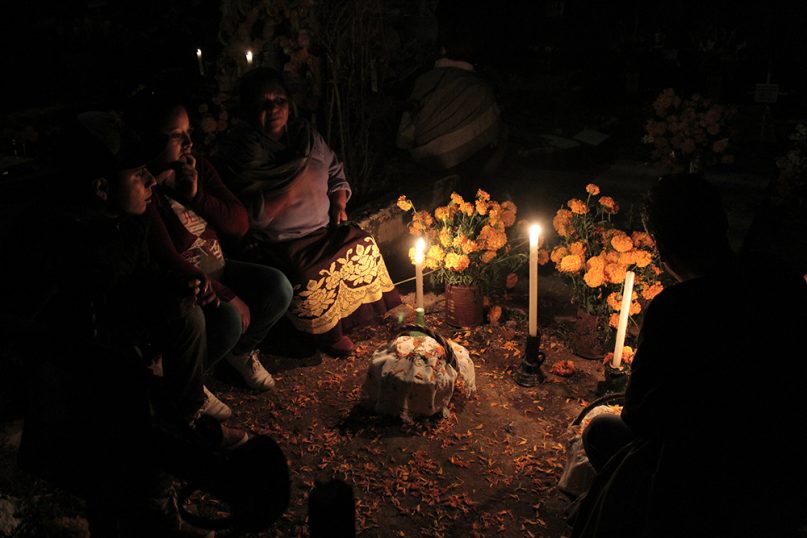 A family brings a basket of food to the grave of a dead relative to share the food with the soul of the deceased while celebrating Day of the Dead on Janitzio Island, Mexico, in 2018. RNS photo by Irving Cabrera Torres

He compared words, emitted from silence, to the emergence of life from death, stating that just as it happens with words, life allows us to search for meaning. Death, Francis said, is what “allows us to remain alive” and creates a horizon for “a story to be written, a painting to be painted, two bodies to embrace.”

But the pope warned against focusing solely on the “end goal,” and forgetting to “pay attention to each small purpose of everyday life.” After all, he explained, the purpose of a book is not found by getting to the last page, but focusing on each chapter, each word, each silence.

“Only a life that is conscious of the fact that this exact instant will end, works to make it eternal,” he said.

During the Halloween and Day of the Dead celebrations, when we are reminded about death, whether dressed up in costumes or honoring the departed in the cemeteries, the pope called faithful to not just focus on the moment, but also recognize human limits.

Death, he said, “comes as a slap in the face to our illusion of omnipotence. It teaches us throughout life to engage ourselves with mystery. This gives us confidence to jump into the void and to realize that we will not fall, that we will not sink, and that there is always Someone there to catch us.”

Sure, the pope admitted, “not knowing” can leave people feeling fragile, but it is precisely that fragility that can prompt opening up to one another and overcoming fear, “to create something, and to come together to celebrate it.”

It’s the questions surrounding death, Francis said, that have driven communities, peoples and cultures from all over the world to come together in order to survive. “That is why today, perhaps as never before, we should touch on this question,” he said.

“Remember, if death is not to have the last word, it is because in life we learned to die for one another,” he concluded.