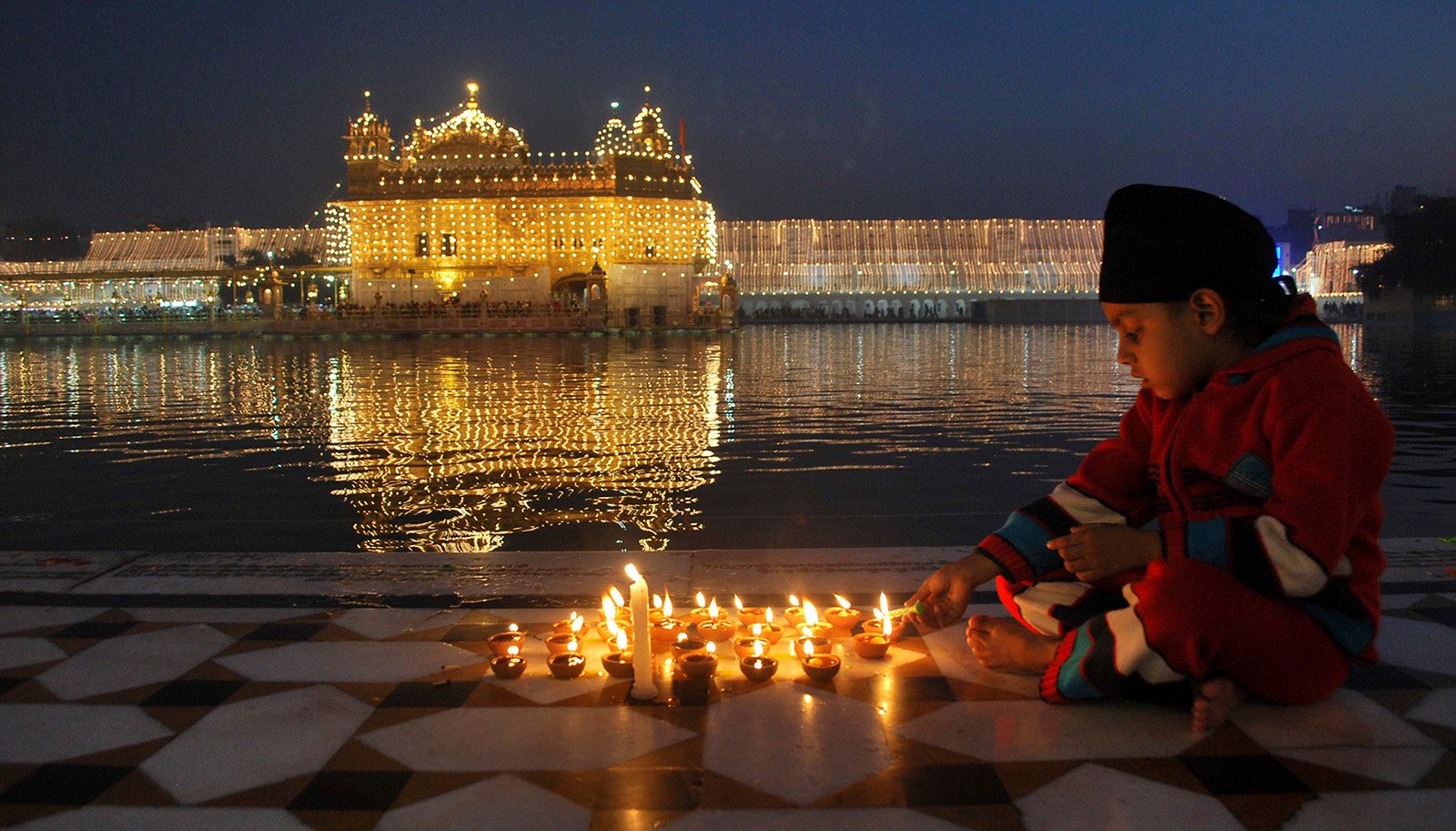 A young Sikh boy lights a candle at the Golden Temple, illuminated in the pre-dawn hours during the birth anniversary of Guru Nanak, the first Sikh guru, in Amritsar, India, on Nov. 17, 2013. (AP Photo/Prabhjot Gill)
November 8, 2019
Simran Jeet Singh 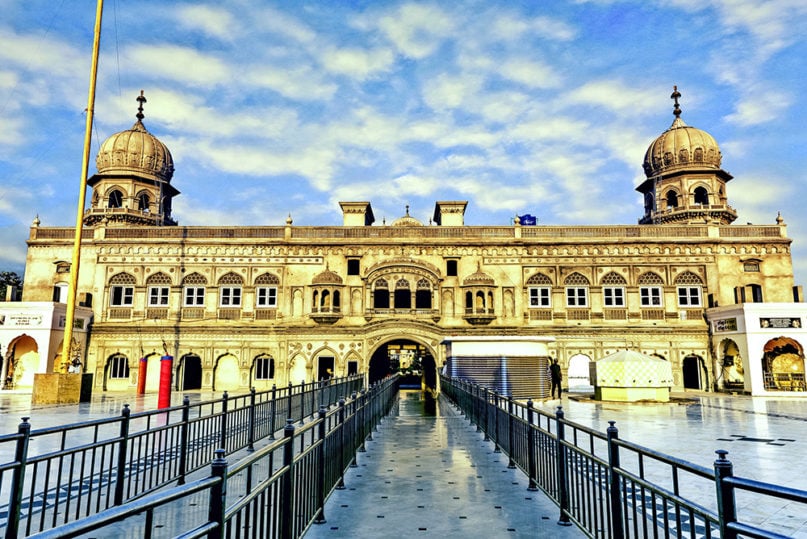 The Gurdwara Janam Asthan is built on the site where Guru Nanak is believed to have been born in Pakistan. Photo by Shaguftakarim/Creative Commons

There is an effort to plant a million trees across the globe to honor Guru Nanak's memory and to combat climate change. In the U.S. , Sikhs are inviting people from their communities to their places of worship (gurdwaras) to learn about their neighbors.

In Guru Nanak's birthplace in what is now Pakistan, called Nankana Sahib in his honor, thousands of Sikhs are coming every day to pay their respects, many of them crossing the India-Pakistan border. This crossing is historic in its own right as it is the first time since the Partition of India and Pakistan 70 years ago that Sikhs in India have had access to Nanakana Sahib.

Born in the humble village of Talwandi, Punjab, in 1469, young Nanak found himself dissatisfied with the inequities, hypocrisies and general unhappiness he observed all around him. He ultimately decided to establish a new religious tradition, Sikhi (in English, Sikhism), a tradition that continues to flourish more than five centuries later.

Today Guru Nanak’s followers comprise the fifth-largest world religion, numbering nearly 30 million around the globe. His teachings have inspired a diversity of expressions over the years, from art and literature to humanitarian efforts. In a way, the most easily noticeable aspect of his legacy is how Guru Nanak continues to inspire so many — including me — and how his teachings continue to resonate with people around the world today.

I did my Ph.D. research on the earliest accounts of Guru Nanak’s life and the teachings contained within them, and I want to share three ideas central to Guru Nanak and the Sikh worldview.

Guru Nanak’s first teaching, and the first teaching to appear in Sikh scripture (Guru Granth Sahib), is the term ik oankar. This term refers to the oneness of divinity, a singular connective force that permeates every aspect of this world. In a prayer that Sikhs have sung every evening for centuries, Guru Nanak wrote, “The same divine light pervades everyone and everything.” 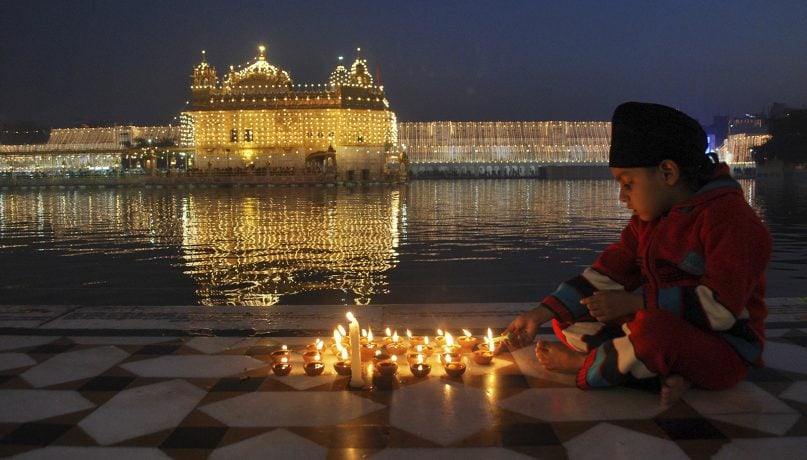 A young Sikh boy lights a candle at the Golden Temple, illuminated in the pre-dawn hours during the birth anniversary of Guru Nanak, the first Sikh guru, in Amritsar, India, on Nov. 17, 2013. (AP Photo/Prabhjot Gill)

Ik oankar is so central to Sikh teachings that many have said all of Sikh wisdom is constructed upon its foundation. It is the first idea I learned as a Sikh, and it’s the first idea my wife and I taught our two daughters as well. The concept of ik oankar informs how Sikhs are to act in this world as well. If we truly believe in a shared divine light, then there is no possibility for discriminating against others.

We see this in the life and teachings of Guru Nanak, who rejected all social disparities and hierarchies (e.g., gender, caste, religion) and advocated for equal treatment and rights for all. For Guru Nanak, seeking equality was a natural outcome of his worldview – any form of supremacy is a blot on our collective divinity.

Guru Nanak taught that it’s not enough to intellectualize our ideas. We must actually live by the values we identify. When we practice feeling a sense of oneness with the world around us, we can cultivate a feeling of connection. This feeling of connection is best described as love. 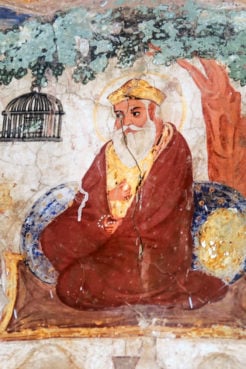 We have all experienced love in some form before, which means we can all understand the close relationship between feeling connected and feeling love. What Guru Nanak wants us to find is something more than the fleeting moments of love we have known – like how we love ice cream and cookies. He wants us to find a deeper form of love, one that lasts over time and is never compromised.

In the Sikh worldview, this is the ultimate goal of our lives — to find and experience this deep connection of love. It’s an all-consuming kind of love, one that brings joy and optimism into our everyday lives and one that becomes embedded in the cores of our beings. This is what Guru Nanak meant when he wrote, "If you want to play the game of love, then approach me with your head in your hands.” This is not a soft, mushy love. It’s a powerful, resounding love, that is both sustained and sustaining.

One of the most commonly circulated accounts from Guru Nanak’s life demonstrates his commitment to service and justice. When he was a boy, Guru Nanak’s father gave him money to go to town and find a good deal. Guru Nanak walked by a group of impoverished devotees and gave all his money to them. In explaining the decision to his father, he pointed out that his father asked him to find a good deal and asked, “What could have been a better deal than this?”

The idea of service in the Sikh tradition ties directly to the ideas of oneness and love. When we truly see our shared divinity and feel love for the people around us, we will automatically be moved to serve them.

It’s a fairly intuitive point. We want to help those we love. And if we love everyone, we will want to help everyone. Guru Nanak termed this sort of love-inspired, selfless service as seva. In the Sikh tradition, to be truly religious, one must be both spiritually and politically engaged (miri-piri). We are each called to become a saint-soldier (sant sipahi). If we truly love, we will be driven to engage politically and make the world a better place for all. This is the logic of justice in Guru Nanak’s vision.

There are many examples from the life of Guru Nanak that exemplify his commitment to seva. He spoke out against the Emperor Babur, who brutally massacred civilians as he sought to solidify his reign in South Asia. Some early sources record that Babur imprisoned Guru Nanak for his resistance.

Guru Nanak established the tradition of langar, a free meal served to anyone and everyone with only one real condition – all must sit together on the floor as a mark of equality. He established community centers, then-called dharamsalas, and he even established a thriving city, Kartarpur, that continues to thrive to this day.

What Sikhs take from the life of Guru Nanak is a model for how to live by one’s values and ideals. He is seen as a paragon in this regard, someone who actually practiced what he preached. It is memories and teachings like these that Sikhs will be reflecting on over the next month. The rest of us might do well to take this opportunity to reflect on these ideas as well.