(RNS) — It is normal and customary to identify Pope Francis’ conservative critics as “traditionalists.” But much of what they say is a far cry from Catholic tradition — not least their criticism of the pope itself.

We need a new way to identify them.

Back in 2013, prominent conservative author George Weigel published “Evangelical Catholicism,” a manifesto for making the faith more like, well, evangelical Protestantism. In a shrewd review of the book, the great evangelical historian of American Christianity, Mark Noll, then teaching at Notre Dame, counted the ways. These include an embrace of biblicism, a call for personal evangelism, an emphasis on “friendship” with Jesus and even a celebration of adult baptism.

Thus did conservative Catholicism à la Weigel become inculturated with American evangelicalism (“inculturation” being the Catholic term for how the church engages with a particular culture, from 16th-century China to 21st-century Amazonia). And why not? Since the late 1970s, conservative Catholics and evangelicals have been allies in the culture war that has shaped American partisan politics.

Appearing shortly after the election of Pope Francis, Weigel’s book registers no concern that the Vatican and its episcopal appointees around the world would do anything to threaten the conservative “reform of the reform” of the Second Vatican Council undertaken by John Paul II and Benedict XVI.

Whoops. Six years into Francis’ papacy, the spirit of Vatican II is back big time, and, in response, the evangelical Catholicism of Weigel & Co. has become fundamentalist, in the original sense of the term.

Fundamentalism derives its name from a group of 90 essays titled “The Fundamentals” that were published between 1910 and 1915.  Some of them argued for classic Christian doctrines like the Virgin Birth, Christ’s bodily resurrection and physical return, and his substitutionary atonement on the cross.

But that project was driven by opposition to Darwinian evolution, which had made considerable headway in the mainline Protestant denominations. “The Fundamentals” promulgated a novel doctrine of the Bible’s inerrancy, insisting on the literal truth of its two creation stories in a way that fetishized Protestant biblicism. 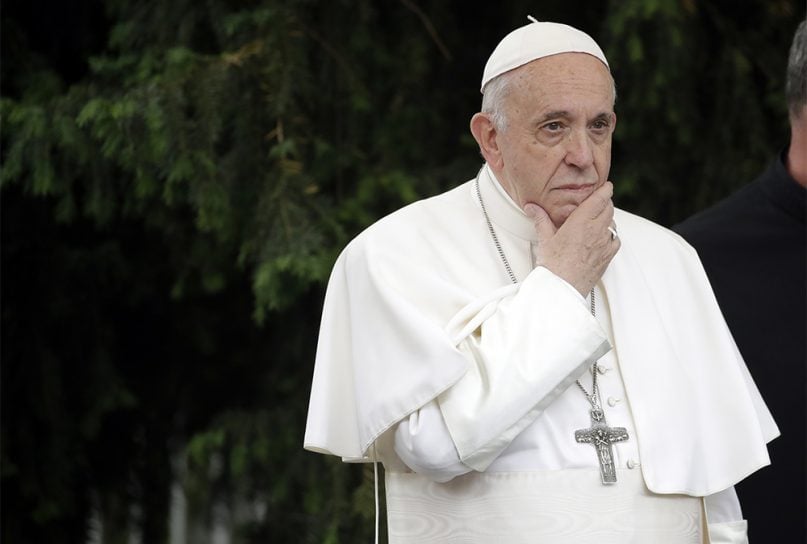 Pope Francis attends an ecumenical and interreligious meeting with young people in Skopje, North Macedonia, on May 7, 2019.(AP Photo/Alessandra Tarantino)

Like their Protestant predecessors, today’s fundamentalist Catholics find themselves embroiled in what they consider a war for the soul of their church. Anti-traditionally, they have combined their new biblicism with (their understanding of) Catholic teaching and discipline into the supreme religious authority, beyond the power of the pope’s teaching authority (magisterium) or church council to change.

Pope Francis’ modest reform agenda has thus become anathema to them. “There’s a breakdown of the central teaching authority of the Roman pontiff,” Cardinal Raymond Burke, their foremost American figure, recently told New York Times columnist Ross Douthat. “The successor of St. Peter exercises an essential office of teaching and discipline, and Pope Francis, in many respects, has refused to exercise that office.”

Exhibit A has been Francis’ decision to allow jurisdictions to permit Catholics who have divorced and remarried to take Communion, as if that were more of a scandal to the principle of the indissolubility of marriage than the fig leaf of annulment — and as if the Eastern Orthodox, whose claim to Christian antiquity is equal to Roman Catholicism’s, not only permits this, but allows second and third post-divorce marriages to take place in church.

In the just-concluded synod on the Amazon, the fundamentalists were scandalized by the call for married men to serve as priests in the Amazon region, as if Eastern Rite Catholic priests haven’t been married for centuries, and as if Pope Benedict this very decade didn’t authorize married Anglican priests who convert to serve as Catholic priests.

The fundamentalists were also scandalized by Francis’ reconvening a commission to study the history of women deacons in the church — a history well attested in the sources — presumably with an eye to authorizing the ordination of women as deacons sometime soon.

Most of all, the fundamentalists got their knickers in a twist over a two-foot-high indigenous carving of a naked pregnant woman, identified with an Incan figure called Pachamama, that was presented to the pope at the beginning of the synod and placed in a church in Rome (from which a young zealot removed it and threw it in the Tiber). In their view, it was a pagan idol, not an example of wholesome inculturation, as if portraying Pachamama as Our Lady of the Amazon was any more violative of Catholic belief than the assimilation of the Aztec Mother Goddess Tonantzin into the Virgin of Guadalupe.

A century ago, the original fundamentalists went to battle for control of the Protestant denominations and lost. But they stuck to their guns, set up their own ecclesial and media institutions and lived to fight another day.

In his Sunday column, Douthat argues that Burke et al. are likely to lose the battle for their church but that because it’s hard for conservative Catholics to abandon even a pope they disagree with, they’re unlikely to leave it — not that this hasn’t happened before. Whatever the case, they’ll go down fighting.