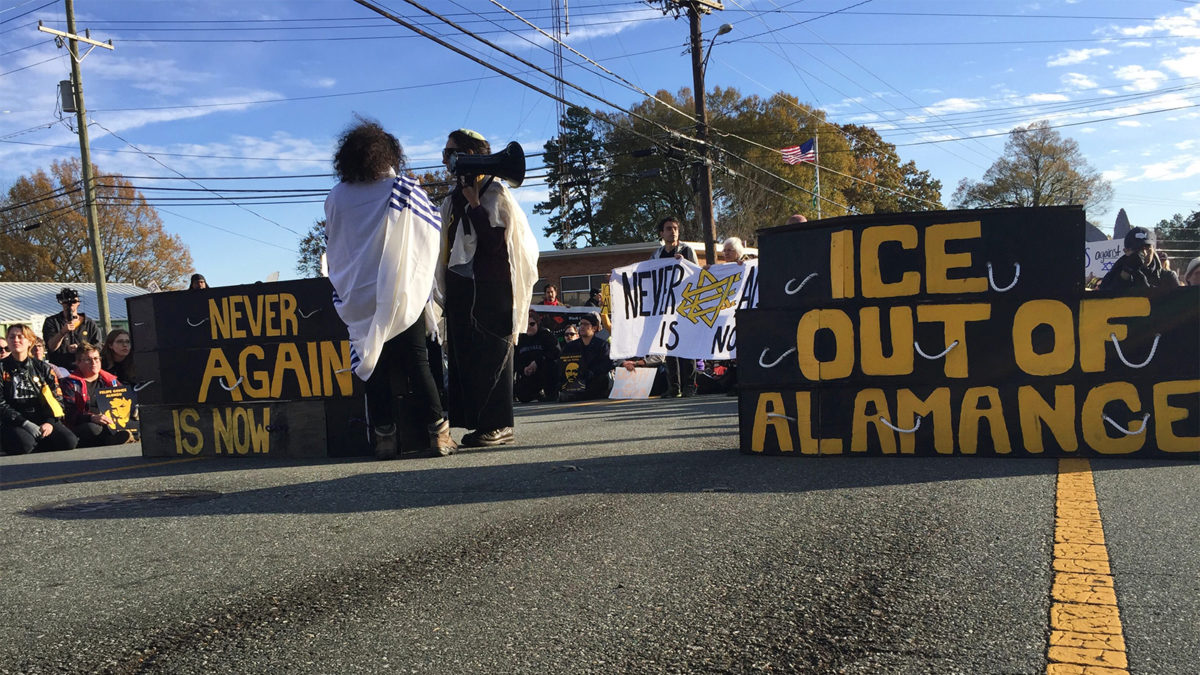 Activists from the Jewish group Never Again Action block a road with six empty black coffins at an ICE facility in Graham, North Carolina, on Sunday, Nov. 24, 2019, to protest the detention and deaths of immigrants in ICE custody. RNS photo by Yonat Shimron
November 25, 2019
Yonat Shimron

Never Again Action, the nascent Jewish movement that organized the procession, has staged about 50 protests across the country, usually in cooperation with Hispanic grassroots organizations. The target is always ICE, the federal law enforcement agency responsible for implementing immigration policy.

Johnson is one of the few sheriffs in North Carolina willing to work with ICE. Last year, newly elected sheriffs in the state’s biggest counties cut their contracts with ICE, so the agency turned to Alamance County where it found a willing partner. The rally in the small city of Graham, located off Interstate 40 between Durham and Greensboro, drew people from across the state, including a contingent from the Hispanic advocacy group, Siembra NC.

“Because of what was done to us and what is just and right, it is once again time for Jews and people of conscience to once again say 'Never Again,'” said Beth Bruch of Durham, one of half a dozen speakers at the afternoon event, which attracted upwards of 400 people to the lawn of the Center for Spiritual Living in Graham.

READ: A Jewish movement against ICE takes off by deploying its most famous mantra

The movement has tapped into a mantra generations of Jews have grown up hearing from their parents, grandparents and community leaders in reference to the Holocaust: Never again. Bruch said two of her grandparents came to the U.S. to escape Nazi Germany in the 1930s.

Protesters also wanted to voice their concerns about Sheriff Johnson, who has a history of controversy. In 2012, the Department of Justice sued Johnson's offices for allegedly using "anti-Latino epithets" and "discriminatory conduct" against Latinos. At a county board meeting this year, he accused “criminal illegal immigrants” of “raping our citizens in many, many ways,” the Charlotte Observer reported.

Johnson’s contract with ICE allows the agency to house dozens of asylum-seekers — many of whom say they are fleeing violence and persecution — in the Graham, North Carolina, jail. 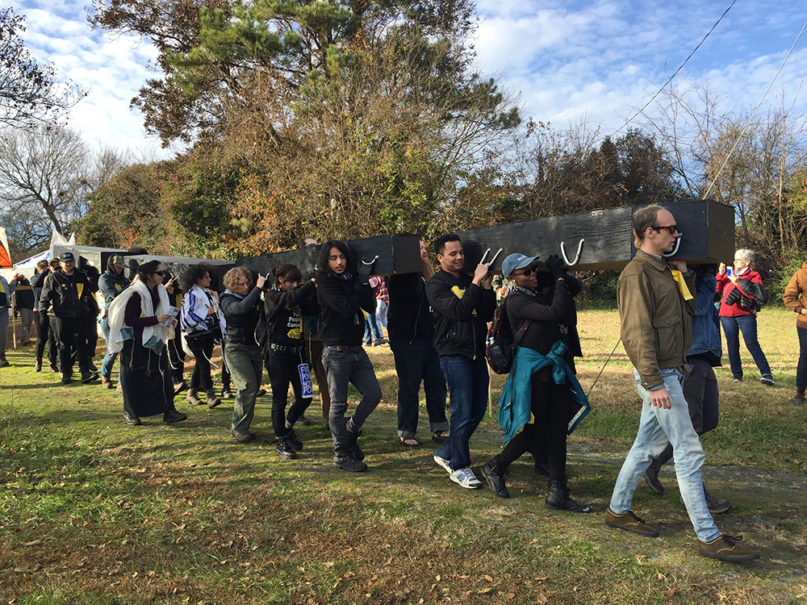 The crowd assembled under a bright sunny sky for nearly five hours, first for speeches. When the Graham Police Department —  with assistance from six other regional law enforcement groups —  blocked the pallbearers from proceeding toward the detention center, about half a mile away, a group sat on the pavement in front of police officers to simulate the seven-day period of mourning in the Jewish tradition, called the "shiva."

The Graham Police Department said it arrested five people. The sheriff's department arrested another handful. Never Again Action said nine were arrested in all, mostly for failure to disperse. The group did not apply to the city for a permit to protest on the street. 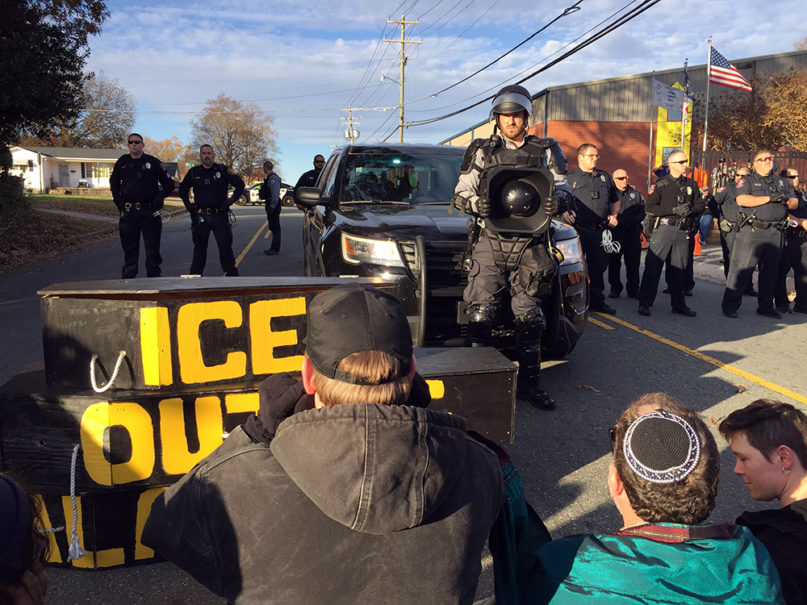 Activists, foreground, from the Jewish group Never Again Action, place six empty black coffins in a road after their procession was stopped by police in Graham, North Carolina, on Sunday, Nov. 24, 2019. The activists were protesting the detention and deaths of immigrants in ICE custody. RNS photo by Yonat Shimron

Never Again Action has been particularly successful at drawing college students and young Jewish millennials to protests in all the major U.S. cities. It has not drawn establishment leaders from across the Jewish community. Though several rabbis were invited, few attended.

In addition to T-shirts and banners, many of the Jews arrived Sunday wearing yarmulkes and prayer shawls. Two Jewish participants chanted the Kaddish, the mourner’s prayer in Hebrew, as well as the prayer for the departed, called “El Malei Rahamim.”

The prayers were interspersed with chants of “Hey ho, hey ho, Terry Johnson has to go,” as well as “El pueblo unido jamás será vencido” or "the people united will never be defeated.”

One of the protesters, Julia Springer, a 27-year-old  Jew from Durham, said the action was a way of demonstrating that immigration enforcement is not just something that happens at the border with Mexico.

“It’s easy to think this terror and violent system is happening far away, but in fact, it’s happening in our community,” Springer said. “We need to take seriously the role we are playing in this horrible system.”