TOKYO (RNS) — Members of this country’s small but vocal opposition to the government’s nuclear energy policy took heart Monday (Nov. 25) from Pope Francis’ last speech of his visit to Asia, in which the pontiff voiced his “concerns” about the use of nuclear power.

“Our age is tempted to make technological progress the measure of human progress,” Francis told the crowd at Bellesalle Hanzomon convention center in downtown Tokyo. “So it is important at times like this to pause and reflect upon who we are and, perhaps more critically, who we want to be.”

Hajime Matsumoto, a founder of the collective Shirōto no Ran (Amateur Revolt), said the inhabitants of Tokyo’s bohemian Kōenji district agree with the pope’s misgivings.

“If there is another big accident, this community will disappear. This is very, very bad,” he told Religion News Service in an interview Monday at his small recycling shop in Kōenji, the birthplace of the city’s punk scene.

The debate over nuclear power in Japan is almost entirely framed by the March 2011 disaster at Fukushima Dai-ichi plant, when a tsunami struck the country’s east coast, short-circuiting the reactor’s backup cooling system and causing the worst nuclear spill of radioactive material since the Chernobyl accident 25 years earlier.

“In Fukushima now, many small villages and communities cannot live inside the radius. So, we are very angry. This is very dangerous,” said Matsumoto. 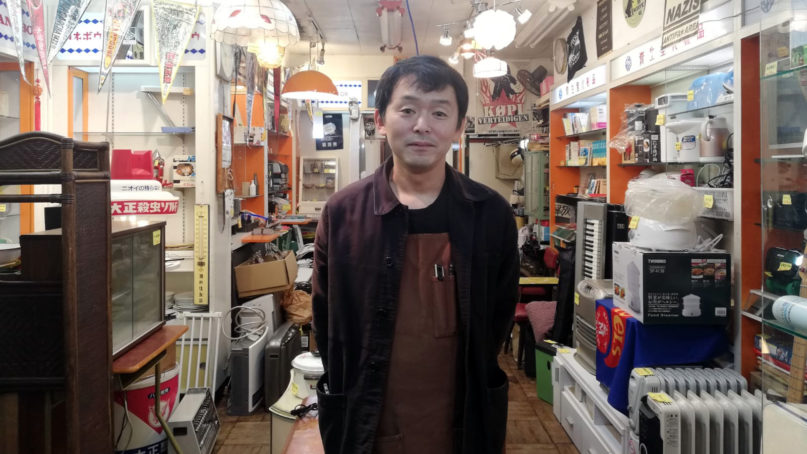 Pope Francis also met three survivors of the Fukushima disaster on the last day of this week’s apostolic visit to Thailand and Japan.

“We cannot fully convey our suffering. So please pray with us, Holy Father,” Matsuki Kamoshita told the pope. Eight years old when the disaster occurred, Kamoshita told of being forced from home, then bullied at the evacuation center.

“Pray that those who have power will find the courage to follow another path,” Kamoshita said. “Pray that we can all overcome this injury. And please pray with us that people from all over the world will work to eliminate the threat of radiation exposure from our future.”

Known as the Triple Disaster, or 3/11, the failure of the Fukushima plant reshaped public opinion about nuclear energy in Japan. The number of Japanese who said they do not trust nuclear power energy jumped from roughly 10% in 2010 to more than 24% after the disaster. In 2017 that number grew to 30.2%, according to a 2018 survey by the Japan Atomic Energy Relations Organization. Japan, red, is located on the eastern edge of Asia. Map courtesy of Creative Commons

According to the JAERO study, only 1.9% of Japanese citizens trust the government, mostly due to “lack of information disclosure” and insufficient safety measures. In 2017, almost 80% of the population favored “phasing out” of nuclear power, the same study showed.

Prime Minister Shinzo Abe has been pushing to relaunch Japan’s 54 nuclear energy plants closed after 3/11. So far, he’s been successful in opening fewer than 10.

“In this area, all the people are against Abe,” said Matsumoto, who points out that the Abe government is currently facing a corruption scandal that includes calls for the resignation of members of his Cabinet. “The pope’s timing is very good,” Matsumoto said with an irreverent smirk.

He hopes that the pope’s words on nuclear energy might spur a reawakening of opposition to reopening the plants. On April 10, 2011, Matsumoto organized the biggest street protest in Tokyo since the end of the Second World War in opposition to the government’s handling of the Fukushima disaster. About 15,000 people marched through Kōenji.

According to Matsumoto, Japan’s Buddhist and Shinto beliefs make the country a perfect breeding ground for Francis’ calls for peace. But he worries that protest culture that briefly opened in 2011 may have closed forever.

The pope seemed to have Matsumoto’s concerns in mind Monday when he told his audience, “The path to a full recovery may still be long, but it can always be undertaken if it counts on the spirit of people capable of mobilizing in order to help one another.”

Kaho Ikeda was among those heavily impacted on 3/11. She and her family were forced to leave their home because they lived in the roughly 16-mile radius evacuated by government officials to avoid radiation exposure. She was among those who gathered at the Amateur Revolt’s Manuke guesthouse in Kōenji to listen to Francis’ 20-minute meeting with Abe on Monday, where the pontiff discussed the environment, energy and sustainability.

“Having had the opportunity of observing at such an intimate distance Pope Francis, who walks right alongside the poor and the disadvantaged and keeps pushing on forward, I too have renewed my determination, a determination to press on tirelessly, in order to make the world a better place,” Abe said in his statement to the press after his meeting with the pope.

For Ikeda, as important was the “strong message” sent by the pope’s visits earlier in the week to the two Japanese cities devastated by atomic bombs at the end of the war.

“They want to use nuclear-powered energy for economic benefit,” said Ikeda. “Sometimes they close their eyes to Hiroshima and Nagasaki.”