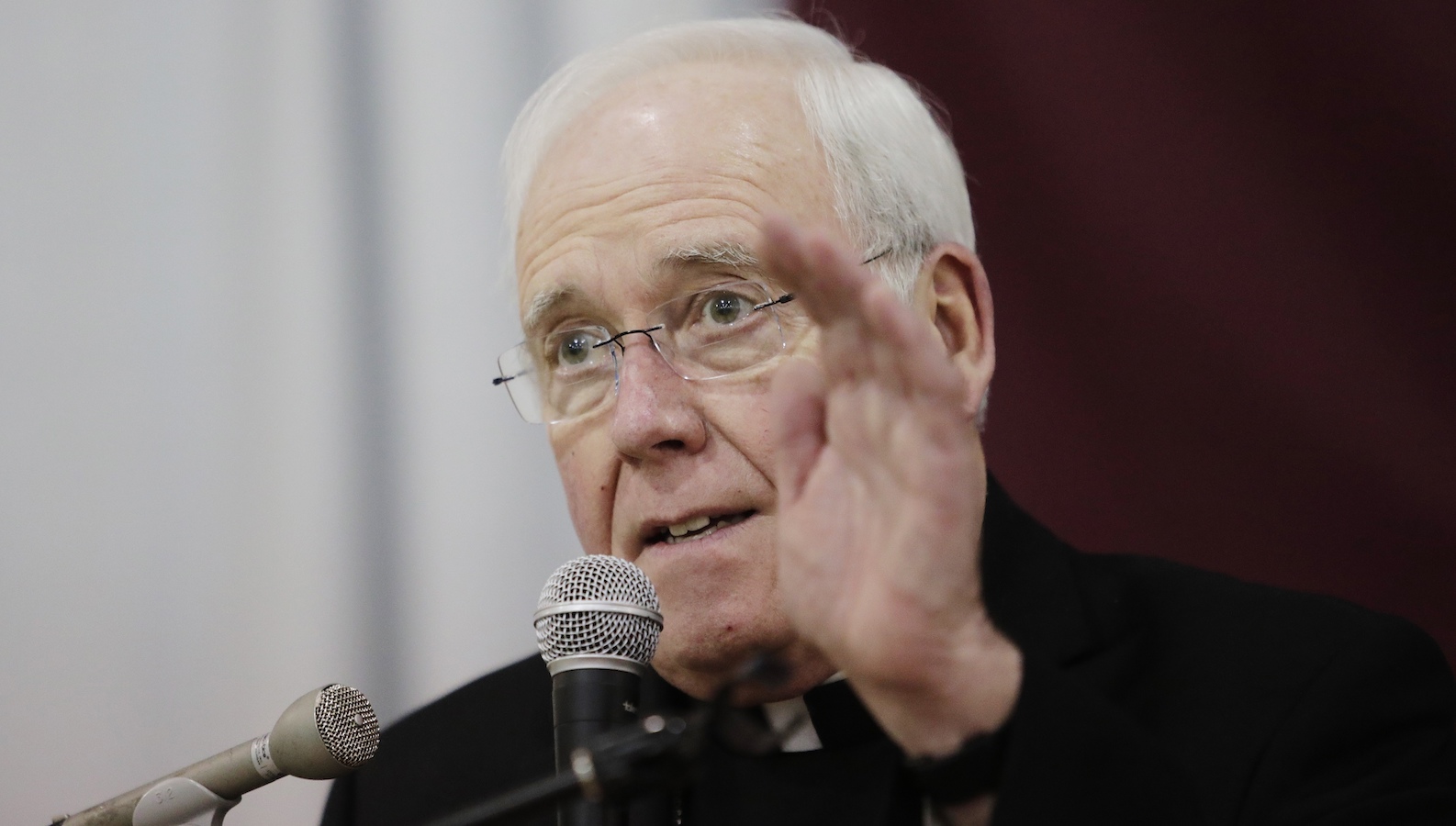 Bishop Richard Malone, bishop of Buffalo, speaks during a news conference Nov. 5, 2018, in Cheektowaga, New York. Malone has resisted calls to step down amid reports that he left accused priests in ministry and excluded others from a list of problematic priests released to the public in March. (AP Photo/Frank Franklin II)
December 4, 2019
Nicole Winfield

NEW YORK (AP) — Bishop Richard Malone of Buffalo resigned Wednesday (Dec. 4), forced to step aside amid mounting calls for his ouster from his staff, priests and the public over his handling of allegations of clergy sexual misconduct.

The Vatican said Pope Francis accepted the resignation and appointed Edward Scharfenberger, the bishop of Albany, New York, to run the Buffalo Diocese until a permanent replacement is found.

Malone insisted he had decided to retire two years before the mandatory retirement age of 75 on his own accord, after much prayer and discernment. However, the Vatican Embassy to the U.S. said Malone only offered to retire after learning the results of a Vatican-mandated investigation into the western New York diocese and its handling of abuse claims.

In a statement, Malone said he had come to believe "that the spiritual welfare of the people of the Diocese of Buffalo will be better served by a new bishop who perhaps is better able to bring about the reconciliation, healing and renewal that is so needed."

Scharfenberger told a news conference in Buffalo that he wants to be seen as a healer willing to listen and to develop trust.

"I feel a little bit like the neighbor down the block," he said, "and I realize that this family has been suffering quite a bit in recent months and years. And my heart just goes out (to) you. And what I see is a need for a tremendous amount of healing ... honest conversation, openness."

As the new apostolic administrator for Buffalo, Scharfenberger plans to visit the eight-county diocese weekly while keeping up with his duties in Albany.

The diocese has been named in more than 220 recent lawsuits by people who allege they were sexually abused by priests.

Many of the allegations date back decades, long before Malone's arrival in Buffalo in 2012. But critics say there have been more recent missteps by Malone, including his decision to return to ministry a priest who had been suspended by a previous bishop for including "love you" in a Facebook message to an eighth-grade boy.

Malone later endorsed the same priest for a job as a cruise ship chaplain, even after he was also accused of making unwanted advances toward young men.

Malone has admitted to making mistakes in cases involving adult victims. But he had firmly refused to resign and insisted he wanted to stay on the job to see the diocese through a process of "renewal." Pressure on him to leave was intense.

In the past year, two key members of Malone's staff have gone public with concerns about his leadership, including his former secretary, the Rev. Ryszard Biernat, who secretly recorded Malone calling a then-active priest "a sick puppy," but taking no immediate action to remove him.

Earlier, his executive assistant, Siobhan O'Connor, leaked internal church documents after becoming concerned that Malone had intentionally omitted dozens of names from a publicly released list of priests with credible allegations of abuse.

A diocesan priest, meanwhile, circulated a "no confidence" letter for signatures.

And in September, a group of lay Catholics that had been working with Malone to restore trust in the church instead joined in calls for his resignation.

The group, the Movement to Restore Trust, said it received word of Malone's departure "with a mixture of sadness and relief."

"There is much work to be done to move our church toward this new day when sexual abuse and misconduct is unthinkable, when victims of sexual abuse achieve a measure of justice and healing from the Church that has wronged them, and when the laity are welcomed as equal participants with the clergy in the task of rebuilding the diocese," it said.

The Vatican hasn't released the results of the inquiry into Buffalo that was conducted by Brooklyn Bishop Nicholas DiMarzio.

Malone said he had been made aware of the "general conclusions" of the report and that they had been a factor in his decision to seek early retirement.

"It is my honest assessment that I have accomplished as much as I am able to, and that there remain divisions and wounds that I am unable to bind and heal," he said.

DiMarzio said he had conducted his investigation with "urgency" at the request of the Holy See, interviewing 80 people over several weeks.

"I pray this moment of suffering and pain will lead to a birth of new faith," he said.

Scharfenberger said he had not read the report, though he had spoken to DiMarzio and has an idea of the "major factors that were identified."

Among those who called for Malone's resignation was the former dean of seminarians at the diocese's Christ the King Seminary. In a letter outlining his decision to withdraw from his studies to become a priest, Stephen Parisi called the diocese's handing of clerical sexual abuse cases "disgusting and revolting" and raised questions about the institution's academic practices and oversight.

Malone in April suspended three priests after several seminarians complained the older men subjected them to disturbing and offensive sexual discussions during a party at a rectory.

The Buffalo Diocese has paid out over $18 million to more than 100 victims under a compensation program established last year. Since August, it has been named in a wave of new lawsuits under a New York state law that suspended the usual statute of limitations and opened a one-year window for victims to pursue claims regardless of when the abuse happened.

Attorneys general in several states, including New York, have begun civil investigations into how the Catholic Church reviewed and potentially covered up abuse.

Malone's ouster is just the latest in a series of bishops in the U.S. and elsewhere who have been removed — either on their own accord, forced by Rome or a combination of the two — because of sexual misconduct and or mishandling of abuse cases.

Most significantly, Francis last year forced every active bishop in Chile to tender his resignation because of their roles in abusing minors or covering up cases. He has accepted fewer than a dozen of them, but more resignations are expected.

Francis last year also reluctantly accepted the resignation of Cardinal Donald Wuerl as archbishop of Washington, after Wuerl lost the trust of his priests and faithful over his role in the Pennsylvania grand jury report and the scandal over his predecessor, Cardinal Theodore McCarrick.

Francis also sanctioned McCarrick, defrocking him after the retired archbishop of Washington was found guilty by a church investigation of sexually abusing minors as well as adults.

Last year, Francis removed Bishop Michael Bransfield of Wheeling-Charleston, West Virginia, following allegations of sexual and financial misconduct, and forced him to make amends. In 2016, he suspended the archbishop of Guam, Anthony Apuron, and put him on trial at the Vatican for sexually abusing altar boys; the Vatican's guilty verdict was upheld in April. And in 2015, Francis forced out St. Paul-Minneapolis Bishop John Nienstedt following allegations he botched cases and himself was accused of misconduct.

The Vatican is still looking into allegations against former Cheyenne, Wyoming, Bishop Joseph Hart, who is also reportedly facing possible criminal charges after 10 men accused him of sexually abusing them.

The bishops have generally denied the allegations against them.

Malone said he intended to "continue to live among you as Bishop Emeritus" and to be available to serve. Scharfenberger said that's a decision he has yet to make.

"I'll be in conversation with him, as well as with the Holy See, as to see what role, if any, would be appropriate for him in the diocese. And if not, where else," Scharfenberger said.
___
Associated Press writers Carolyn Thompson in Buffalo and Michael Hill in Albany contributed.