(RNS) — With the backing of a consortium of Christian colleges and universities, a Utah congressman introduced a bill Friday (Dec. 6) that would ban discrimination against LGBTQ people while also protecting religious institutions that uphold traditional beliefs about marriage and sexuality.

The so-called “Fairness for All” bill, introduced by Rep. Chris Stewart and eight other Republican legislators, is the culmination of a three-year effort to bridge the divide between two typically warring groups: LGBTQ people and religious conservatives.

“All of God’s children, regardless of sexual orientation or religion, deserve dignity, respect, and the right to pursue happiness,” Stewart said in a statement. “This legislation allows us to settle the legal questions and get back to the business of loving our neighbors.”

The bill offers an alternative to the Equality Act, which passed the House of Representatives in May but is blocked in the Senate and unlikely to come up for a vote any time soon. That bill included broad protections for the LGBTQ community but few exemptions for churches, schools and charities that object to homosexuality and same-sex marriage on religious grounds.

Like the Equality Bill, Stewart’s bill would expand federal laws that prohibit discrimination based on race, color and national origin to include sexual orientation and gender identity. If passed, it would extend legal protections to LGBTQ people in housing, employment, public accommodations, commercial credit and jury duty.

Only 22 states and Washington, D.C., now provide some or all of those protections to LGBTQ people, according to the Williams Institute at UCLA. 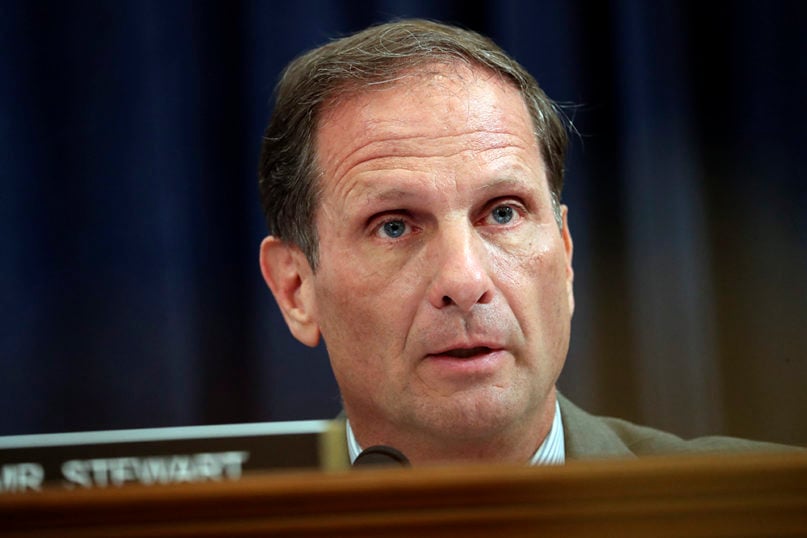 Absent any federal laws, the Supreme Court is expected to rule next year on two cases involving job discrimination against LGBTQ Americans. The court will have to decide if the Civil Rights Act of 1964, which bars job discrimination based on sex, can also be applied to LGBTQ people.

Prospects for the passage of the “Fairness for All” bill did not appear especially bright, given its Republican-only support thus far.

But cooperation on the bill by some conservative religious groups represents a breakthrough in one sense: It may be the first time that the Council for Christian Colleges and Universities, the Church of Jesus Christ of Latter-day Saints and the Seventh-day Adventist Church have championed federal legal protections for sexual orientation and gender identity. All three gave the bill their blessing.

Work on the bill began shortly after 2015 when the Utah Legislature passed a law balancing rights for LGBTQ and religious people in that state. The law, known as “the Utah compromise,” was hailed by the LDS Church, which is opposed to same-sex marriage but supports a ban on discrimination in employment and housing for LGBTQ people, so long as it provides exemptions for church groups.

With the Utah compromise as a model, the CCCU, an association of more than 180 Christian institutions, began working with lawyers and other First Amendment groups to draft a federal bill that would do the same and more. Many Christian schools prohibit premarital sex and same-sex relations. They want to continue to hire staff that conform to those religious convictions and provide federal financial aid to students. The Equality Act would jeopardize that.

“There are many instances where the divide between LGBT people and orthodox people of all faiths seems unbridgeable,” said Shirley Hoogstra, CCCU president. “The future we would like to be part of is one where people who have disagreements have respect for one another.”

The bill’s religious liberty exemptions, however, were immediately shot down by groups advocating for LGBTQ rights. The Human Rights Campaign, the American Civil Liberties Union, Lambda Legal and PFLAG, said they oppose it.

Alphonso David, president of the Human Rights Campaign, said the bill was an “unacceptable, partisan vehicle that erodes existing civil rights protections based on race, sex and religion, while sanctioning discrimination against lesbian, gay, bisexual, transgender and queer (LGBTQ) people.”

Only one LGBTQ group, the American Unity Fund, which defines itself as working to advance LGBTQ rights among conservatives, supports the legislation and worked on the draft of the bill.

The bill also faces stiff opposition on the right. The Heritage Foundation and the Alliance Defending Freedom, two conservative groups concerned about religious liberty, are also opposed. These groups reject the creation of  special classes for sexual orientation and gender identity.

Douglas Laycock, a law professor at the University of Virginia who was an early adviser on the draft, said he hoped people on the far right and left won’t have the final say.

“Introducing it in this Congress is about introducing the idea and attracting additional supporters,” said Douglas Laycock, “Maybe in the next Congress we will have a chance.”

The bill offered some novel, if controversial, solutions to balancing the rights of religious and LGBTQ people, especially in the area of public accommodations. For example, the bill would allow federal dollars that now go directly to adoption and foster care agencies to go to parents who can spend those dollars at the agency of their choice.

Under the bill, people who want to adopt or foster a child would be given a certificate or voucher that they can use at the provider that best fits their needs, whether religious or secular. That would spare LGBTQ people the humiliation of being rejected by religious agencies that don’t want to serve them while allowing those religious groups to remain in the marketplace.

“The basic difficulty is making sure the religious service providers that are doing very good work are able to stay in the market while respecting the dignity of same-sex couples,” said Robin Fretwell Wilson, a law professor at the University of Illinois who championed the idea and served as an adviser to the bill’s drafters. “I think it respects the dignity of people to allow them to self direct while making sure there are a sufficient number of providers.”

LGBTQ rights groups were critical of that provision, saying it continues to allow discrimination against same-sex couples and LGBTQ individuals wanting to adopt or foster children.

“We can’t all be opponents of reform,” said Wilson. “What we’re doing right now is destructive and unsustainable. We kick it up to the courts and the courts give us answers based on laws written with entirely different problems in mind. This is where legislation can be a value added.”