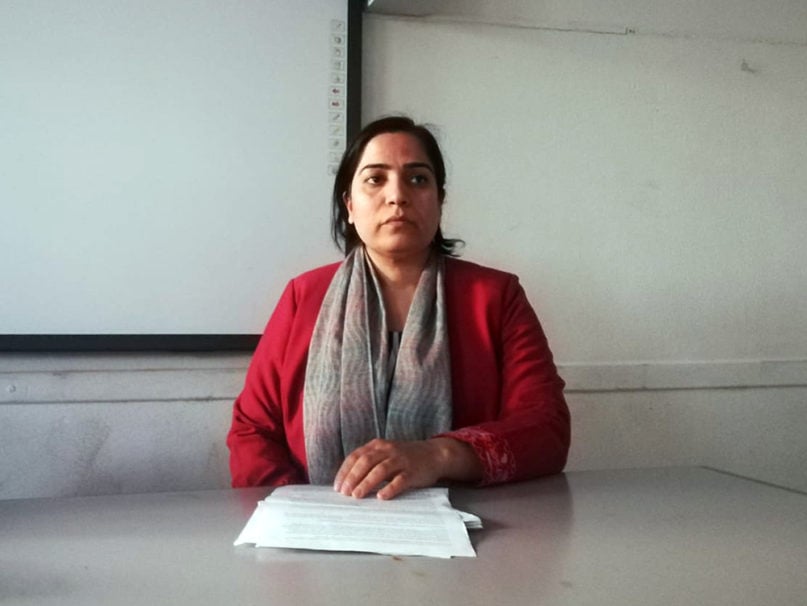 VATICAN CITY (RNS) — In a school in downtown Rome on Friday (Dec. 6), the “bravest woman in Afghanistan” spoke to students about her faith, the Trump administration and the difficult legacy of four decades of war in her home country.

Despite her petite stature, political activist and women’s rights advocate Malalai Joya navigated the crowds of teenage Italian kids, making her way to the improvised classroom where she was scheduled to speak.

If it seems unexpected that one of Time’s top 100 influential people of 2011 was speaking to a boisterous group of cigarette-smoking Italian teens about the future of Afghanistan, one couldn’t tell by looking at Joya. For her, she explained, the resistance started here, with young people, whether they were in one of her underground schools for girls in Afghanistan or in the halls of this Italian high school.

On December 17, 2003, Joya openly denounced the presence of war lords and criminals in the Afghan parliament as they decided the country’s constitution. She refused to apologize and continued condemning injustice until 2007, when she was dismissed from the National Assembly and was forced to live undercover because of multiple death threats and attempts on her life.

Since then she has been forced to change homes every month and live apart from her son, whom she was forced to leave for safety reasons when he was only 11 months old. Despite the personal risk, she has continued to speak out against injustice in Afghanistan and in 2009 published her memoir “Raising My Voice.”

Back at home, Joya’s identity is protected by wearing the body-concealing burka, leaving only her eyes visible to others. Veil-free before the students, she explained how what she considers to be “a symbol of the oppression of women” in her country has actually become her “lifeline.”

“A reason to use the burqa was for my protection, because it covers my entire identity. But it’s not because we believe in burqa,” she told Religion News Service after her speech. “Most women today, not just activists, use burqa because it makes us safe.”

Joya dreams for a future of secularism in Afghanistan, she said in the interview, defying a system where talk of secularism can easily win you the label of “communist” or “infidel.”

While Joya said her mother prays five times a day, her family was never forced to do the same, and she hopes everyone in her country may have the same freedom. Too often, she continued, religion has been weaponized by those in power against the Afghani people. 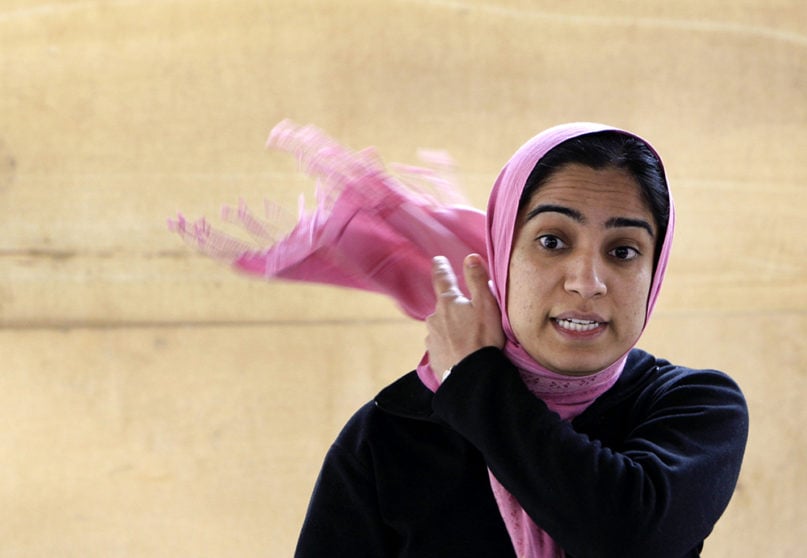 Malalai Joya, an outspoken female Afghan lawmaker who was kicked out of parliament, gestures during a press conference in Kabul, Afghanistan, Saturday, April 5, 2008. (AP Photo/Musadeq Sadeq)

But the real culprits of Afghanistan’s seemingly never-ending struggles are not to be found in religion, Joya said, but in a corrupt system that implicates not only the surviving terrorist cells in the country but also the United States-led coalition that promotes it.

“For us who follow the U.S. policy, presidents are just empty faces, with empty banners,” she said, condemning the U.S. involvement in Afghanistan as one that serves its own political interests.

“Of course,” she added, “since Trump has come into power, I believe he is one of the worst presidents in the world. His first gift when he came to power was to drop the mother of all bombs in Afghanistan.”

In 2017, the Trump administration dropped the deadliest non-nuclear weapon in the U.S. military arsenal on an ISIS cell in Afghanistan. The attack, which the U.S. president called “another very, very successful mission,” is suspected to have had ongoing health impacts for the civilian population. The Afghan government announced it is launching a probe following growing reports of malformed births, respiratory illnesses and dying crops.

In the same year, Gulbuddin Hekmatyar, an Afghan warlord and politician known as “the butcher of Kabul,” whom Joya compares to Italian dictator Mussolini, was removed from the U.N. blacklist.

During a surprise Thanksgiving visit to U.S. troops in Afghanistan last month, President Trump announced his willingness to begin peace talks with the Taliban, which Joya said she views as a betrayal of the international community’s promise to combat terrorism.

According to Joya, NATO and the U.S. handpick the leadership in Afghanistan to serve their own interests. “The choices are made by the occupying powers, especially by the United States. They always choose the wrong people, and they betray those who still continue to vote,” she said.

Joya also made it clear that she believes the intention to impart democracy, fight terrorism and help Afghan women was used as an excuse by foreign countries to exert control over the strategically important nation and never actually led to practical on-the-ground results.

“Peace has no meaning for us without justice,” she said, adding that she believes the country would have a better chance at peace and stability if foreign troops were to leave its soil and end the nearly two-decades-long occupation. 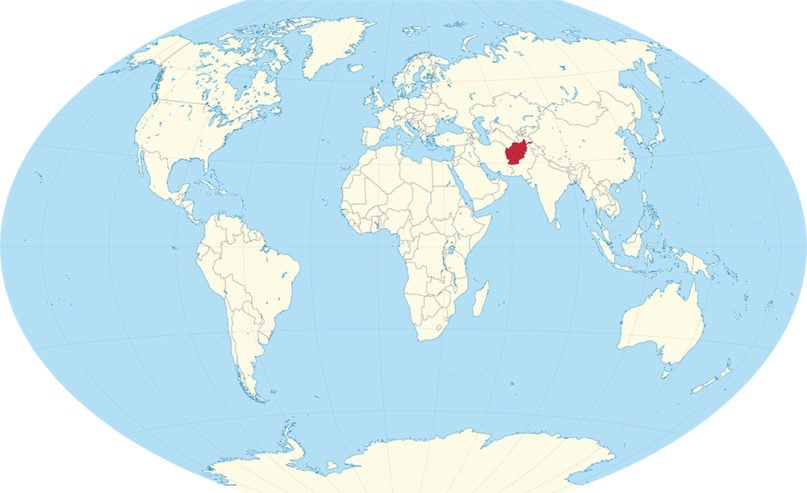 Following 18 years of what she called “NATO occupation,” Joya said, “things have just gotten worse” in Afghanistan. She said that, according to government records, about 100 people die in the country every day due to terrorist attacks, war or unexploded mines.

Speaking to the crowd of Italian students, she described the difficulties and challenges that those wishing to study in Afghanistan face in order to get an education.

“I think Afghan students are the bravest in the world,” she said. “Every day they walk to school despite the war and dare to dream of a better world.”

Schools shut down all the time, she said, because they cannot ensure the security of their students. Afghanistan does not have any public schools, and education is available only to those who can pay tuition.

The high levels of corruption in the country — Transparency International ranks Afghanistan as 172 out of 180 countries in its 2018 Corruption Perception Index — make studying in Afghanistan even harder. Private groups and institutions ask for international funds to create schools but, instead, pocket the money themselves, according to a Chicago Tribune investigation. These so called “ghost schools” have become a symbol of the inefficacy of U.S. and other foreign aid efforts.

Women are the primary victims of Afghanistan’s war-torn and corrupt system, Joya said, and many young girls do not have access to education. The Taliban continues to impose its interpretation of Sharia law, often targeting women by reducing their freedom and independence.

Women in Afghanistan have no rights, she said, and are forced to live in a “patriarchal and misogynistic society,” where they are considered to be the property of men and are not seen as autonomous individuals.

“Women keep dying,” she said, keeping eye contact with any student who would hold her gaze. “Things have not gotten better in the 20 years since the Taliban rule. Things have gotten worse for women.”

Joya’s activism goes beyond the confines of her own country. At four years old, she experienced life as a refugee in the neighboring country of Iran, and today she expresses support for displaced peoples.

Immigration “is often the result of direct or indirect foreign policy of other countries,” she said, which forces families “to flee a life that is unimaginable.”

“The slogan of fighting terrorism is a lie. They are lying to you. Wake up!” she told the students at the end of her speech. “No country can gift freedom to another country. The citizens of a country must try and unite to bring about peace for themselves.”