(RNS) — In the run-up to President Bill Clinton’s impeachment 21 years ago, Christians across the political spectrum engaged in heated debate over the ethics of the president’s sexual misconduct with an intern and the official charge of lying about it under oath.

Evangelicals, in particular, debated Clinton’s violations of ethical standards, his abuse of power, manipulation of the truth and, perhaps most centrally, his character. After Clinton apologized, prior to the impeachment vote, there was discussion about the nature of repentance and forgiveness and whether that relieved him of his wrongdoing.

Back then, 74 theologians from evangelical and mainline schools issued a declaration stating that an “extended discussion about constitutional, ethical, and religious issues will be required to clarify the situation.”

But on the issues central to President Donald Trump’s impeachment Wednesday (Dec. 18), there has been far less engagement, especially among Trump’s most ardent supporters, evangelicals. The House was expected to vote to impeach the president Wednesday evening.

His fiercest allies have called the impeachment inquiry “a sham,” and one of them, the Rev. Franklin Graham, suggested there was “almost a demonic power” at work among those opposing Trump.

Others, such as Tony Perkins, president of the Family Research Council and chair of the U.S. Commission on International Religious Freedom, said he was more focused on the many positive things the president has done, domestically and internationally.

“I look at the policies,” said Perkins. “I don’t get caught up in the personalities, and this administration wins hands down when it comes to the policies.”

As to the substance of the allegations against Trump — that he pressured Ukrainian leaders to investigate a political rival, essentially engaging in extortion — Perkins said: “There’s nothing there. I think it’s reflected in the polling now that people see this more as political theater than anything else.” 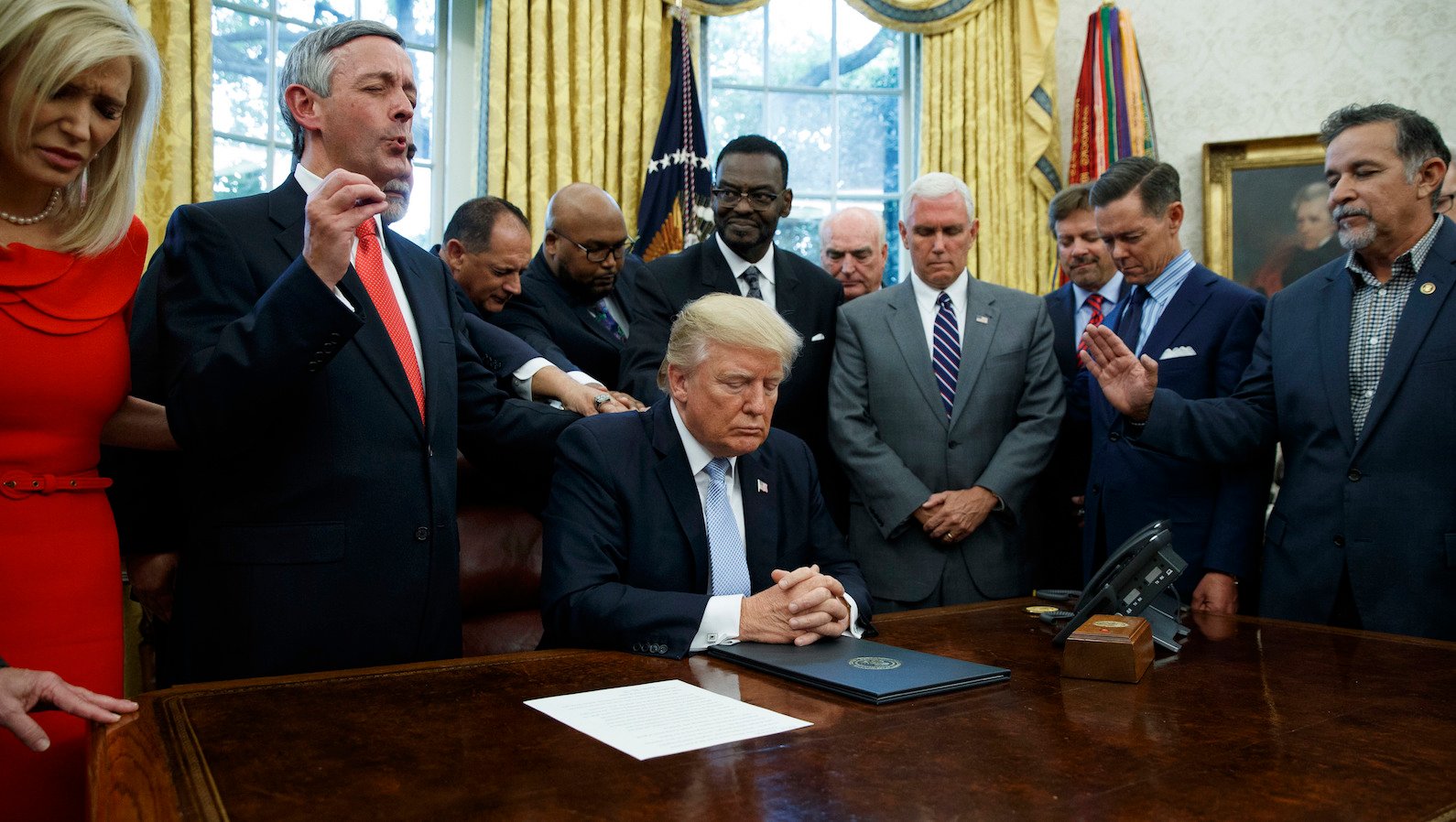 Faith leaders pray with President Donald Trump on Sept. 1, 2017, in the Oval Office of the White House after he signed a proclamation for a national day of prayer to occur on Sept. 3, 2017. (AP Photo/Evan Vucci)

“An unaccountable president is a threat to democracy and the rule of law,” the editorial read. “Stopping such a threat is worth losing your job, even if you’re a senator.”

National Catholic Reporter, a liberal Catholic publication, published an editorial that called the impeachment inquiry “well worth the effort.”

The nation’s Catholic bishops have not issued a statement.

But there was no editorial on Trump’s impeachment in the pages of Christianity Today, the flagship news site for moderate evangelicals.

Christianity Today did publish commentary by Ed Stetzer and Andrew MacDonald on Nov. 26, in which the two writers asked evangelicals to think through whether speaking out about impeachment will hinder or help their gospel witness.

The National Association of Evangelicals was likewise mum. An assistant to incoming President Walter Kim said he would not assume office until Jan. 1 and was not available to comment. Outgoing President Leith Anderson was unavailable.

“This is a departure in impeachment history,” said John Fea, professor of American history at Messiah College in Mechanicsburg, Pennsylvania. “In previous impeachments you had fierce debate. The major debate was all over the substance.”

Fea, who was one of 750 U.S. historians who signed a statement condemning Trump’s “numerous and flagrant abuses of power,” said the partisan divide is far more central this time.

While the votes for Clinton’s impeachment fell mostly, but not exclusively along party lines, in the case of Trump the vote is expected to be strictly partisan.

No Republican was expected to vote for Trump’s impeachment and the passionate defense of Trump included several biblical invocations.

One Republican, Rep. Barry Loudermilk of Georgia, called on the New Testament in his defense of Trump, saying “Pontius Pilate afforded more rights to Jesus than the Democrats have afforded the president in this process.”

Another, Rep. Fred Keller of Pennsylvania, also invoked Jesus’ on the cross asking God to forgive his accusers.

“So I want Democrats voting for impeachment today to know that I’ll be praying for them,” Keller said. “From the Gospel of Luke, the 23rd chapter, verse 34: And Jesus said, ‘Father, forgive them, for they know not what they do.’ ”

The Republican-controlled Senate expected to acquit the president at the end of a trial, which will probably take place in January.

Evangelical pastors and educators for the most part kept a low profile.

“I do think there was a disgust with Bill Clinton in the 1990s because it was a sexual indiscretion,” Fea added. “Here, maybe some evangelicals don’t understand the details of what’s going on. I can’t answer these questions. They’re not out there. They’re not speaking.”