(RNS) — President Donald Trump launched the “Evangelicals for Trump” initiative on Friday by visiting El Rey Jesús Global, a megachurch in Miami led by a Latino pastor who has visited the White House and publicly praised the president.

The Trump 2020 campaign announced the “Evangelicals for Trump” coalition shortly after Christianity Today magazine supported his impeachment in a scathing editorial published Dec. 19.

To the Rev. Samuel Rodriguez, president of the National Hispanic Christian Leadership Conference, it’s significant and “politically brilliant” that Trump’s first campaign move of the year is taking place at a Latino megachurch in the state of Florida, where Cubans were about twice as likely as non-Cuban Latinos to vote for Trump.

Latinos have also benefitted from Trump as he has appointed Supreme Court justices “that respect the sanctity of life,” Rodriguez said.

Tony Suarez, executive vice president of the National Hispanic Christian Leadership Conference, was in Miami on Friday and said he expects Trump will win the Latino vote in higher numbers than in 2016.

“He’s known in our community as a president that stands against communism, socialism and cartels,” he said on Twitter. 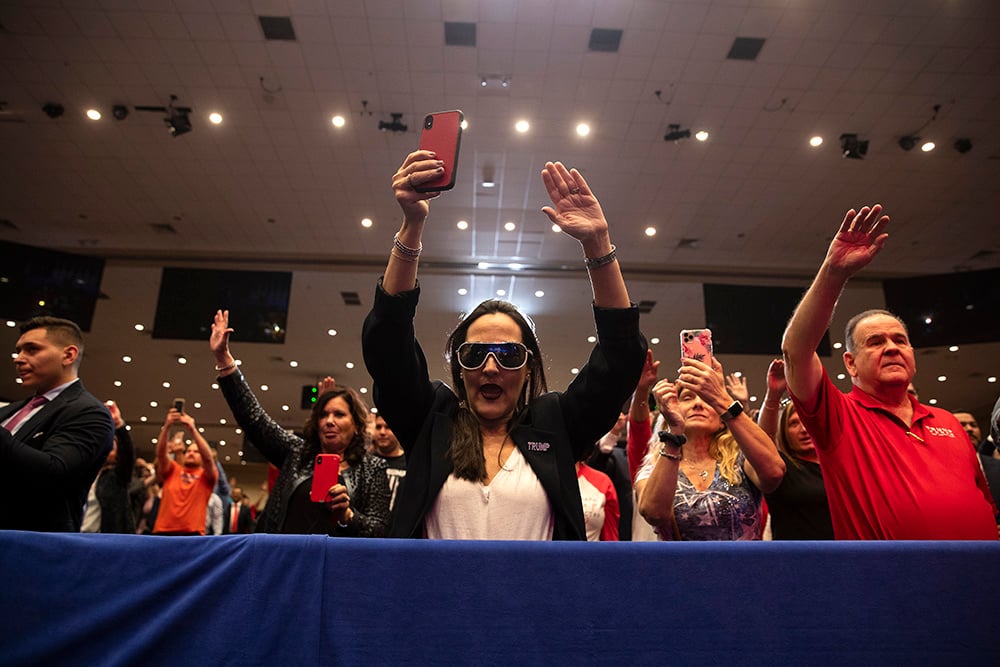 El Rey Jesús, or King Jesus International Ministry, is led by Guillermo Maldonado, who is a member of the “Evangelicals for Trump” coalition. Maldonado goes by the title of apostle and is known to pray in tongues and to boast of healing miracles.

The church’s website says Maldonado was called to establish the church, which he founded with his wife Ana Maldonado, to “gain 12% of the population of Miami for Christ.”

Arlene Sánchez-Walsh, a professor of religious studies at Azusa Pacific University, describes El Rey Jesús as a Pentecostal Word of Faith church. Pentecostalism, a form of Protestantism, emphasizes the works of the Holy Spirit in and through believers, such as praying in tongues, exorcising demons, prophesying and healing miracles.

Word of Faith, Sánchez-Walsh said, is a subset of the Pentecostal movement and is what she calls “name it, claim it” preaching. For example, if believers have good health or wealth it’s because they spoke it into existence, she said.

To Sánchez-Walsh, Trump’s appearance at El Rey Jesús is simply a way to shore up the evangelical base in the wake of the Christianity Today editorial that called for his removal.

“High-profile pastors may have some sway, but I don’t believe they have the kind of political sway Trump assumes they do,” Sánchez-Walsh said.

“The issue is that there are self-appointed Latino evangelical leaders, aligned with Trump, who claim to be able to steer thousands of votes Trump’s way,” she added. “There is no social science evidence that this is true — but yet, the veneer of this influence is what keeps them promoting Trump while ignoring his policies.”

RELATED: In a close 2020 election, could a Hispanic evangelical swing vote be key?

On its website, El Rey Jesús displayed a statement noting that the church is a non-partisan, non-political congregation.

To Lloyd Barba, a professor of religion at Amherst College, this statement is perplexing.

“While that church itself may not endorse a political candidate, or political party, the leaders of the church often do,” Barba said.

And in Pentecostal churches, pastors are not questioned, he said.

“When you say you support a particular candidate because of your biblical conviction, for many congregants that will register as religious, as something that they’re preaching,” Barba added.

Maldonado, in a Spanish-language Sunday service, told parishioners that undocumented members could attend the Trump event without fear of risking deportation, according to the Miami Herald.

“I don’t think the president would do such a thing,” Maldonado was quoted in the Miami Herald. “Don’t put your race or your nationality over being a Christian. Be mature … If you want to come, do it for your pastor. That’s a way of supporting me.”

While evangelicals of all racial backgrounds tend to be more conservative on social issues, there are racial divides on political positions including immigration, according to Janelle Wong, a professor at the University of Maryland.

Wong collaborated on a public opinion survey of more than 10,000 people that included Latinos, Asian Americans, African Americans and whites. More than 2,000 respondents identified as “born-again” or “evangelical.”

Some religion experts believe evangelicals and Pentecostals should do more to help immigrants.

In a 2018 essay, Barba, along with Sánchez-Walsh, wrote that “Evangelicals and Pentecostals, by and large, have been unmoored from any deep theological tradition of social teaching regarding immigration, never having developed a systematic response to state injustices.

“When set in the balance against the weighty record of Catholic and mainline Protestant public social and civil advocacy, indeed the writing on the wall spells out that evangelicals and Pentecostals are found wanting,” the essay read.

Barba said Latino Pentecostal churches are often places of hospitality where large numbers of immigrant undocumented Latinos congregate. When these Latino evangelical leaders take a public pro-Trump stance, “it’s a disservice to the folks in their pews,” Barba said.

For immigrants who are not U.S. citizens, Barba said it “may feel as if they have nothing to say because they don’t have a vote anyway.

“We won’t hear from them, and they are not very likely to voice their opinion because it’s already a hostile space,” Barba said.

For Rodriguez, although he supports the president, Trump’s immigration rhetoric is an area where Rodriguez has disagreed with him.

“I would love him to say that America is blessed because we are a nation of immigrants, but with that being said, we want people to migrate here legally,” Rodriguez said.

Rodriguez said he believes he and other Latino evangelical leaders are making strides in the White House when it comes to immigration reform.

“I’m not wasting my time going to Washington … It’s not a photo opportunity. It’s not a handshake. They listen,” he said. “God is showing up here and something good is coming out of this.”

This story has been corrected. An earlier version incorrectly quoted Lloyd Barba as saying “biblical condition,” instead of “biblical conviction.”