VATICAN CITY (RNS) — In a lengthy speech to ambassadors at the Vatican on Thursday (Jan. 9), Pope Francis laid out his international agenda for the new year by addressing mounting concerns about the situation in Iran, the impact of climate change in Australia and the necessary steps to ensure peace.

“Sadly, the new year does not seem to be marked by encouraging signs, as much as by heightened tensions and acts of violence,” the pope acknowledged.

“Precisely in light of these situations, we cannot give up hope. And hope requires courage. It means acknowledging that evil, suffering and death will not have the last word, and that even the most complex questions can and must be faced and resolved,” he said.

Francis spoke in the Vatican’s Apostolic Palace to the representatives of the 183 states that hold international relations with the Holy See. This speech, which he delivers every year, is a highly anticipated event in the Vatican since it highlights the international issues the pope will likely prioritize.

The year 2020 did not start off promisingly, according to George Poulides, the Cyprus ambassador to the Holy See and the dean of the diplomatic corps, who in his introductory speech warned that “nationalism and particularism are becoming more assertive” in the context “of a third world war that is being fought piecemeal.”

Pope Francis called the heightening tensions between Iran and the United States a “troubling” development that not only might endanger the rebuilding prospects in Iraq, but also set “the groundwork for a vaster conflict that all of us would want to avert.”

“I therefore renew my appeal that all the interested parties avoid an escalation of the conflict and keep alive the flame of dialogue and self-restraint, in full respect of international law,” he said, echoing the plea for peace he delivered on Monday.

The pope also mentioned the situation in Israel, into which political observers fear the U.S. and Iran conflict risks boiling over. Mentioning his joint appeal with the king of Morocco, Mohammed VI, in March of last year, Francis emphasized the need for Jerusalem to be “a symbolic place of encounter and peaceful coexistence.” Mourners attend a funeral ceremony for Iranian Gen. Qassem Soleimani and his comrades, who were killed in Iraq in a U.S. drone strike on Friday, at the Enqelab-e-Eslami (Islamic Revolution) square in Tehran, Iran, on Jan. 6, 2020. (AP Photo/Ebrahim Noroozi)

“(I) reiterate the urgent need for the whole international community to reconfirm, with courage and sincerity, and in respect for international law, its commitment to support the Israeli-Palestinian peace process,” he said.

He criticized the “pall of silence” that has fallen over the war in Syria, confirming the Vatican’s support for peacemaking efforts and thanking the neighboring countries of Jordan and Lebanon for taking on the lion’s share of refugees.

Francis also mentioned the document he co-signed last year with the grand imam of Al-Azhar, Ahmed al-Tayeb, promoting fraternity and unity between Christians and Muslims. The pope stressed the importance of religious freedom and the need to eliminate the term “minorities,” which he said “engenders feelings of isolation and inferiority, and paves the way for hostility and discord, discriminating between citizens on the basis of their religious affiliation.”

The fires that have destroyed a massive portion of wildlife and forests in Australia were also on the pontiff’s mind. “I would like to assure the Australian people, especially the victims and all those in the areas devastated by the fires, of my closeness and my prayers,” he said.

Francis called once more for “an ecological conversion,” observing that its urgency “seems not to have been grasped by international politics,” insisting that the response from those in power “remains very weak and a source of grave concerns.”

He quoted the failure to find effective solutions at the United Nations’ meeting on climate change, COP 25, as an example of the lack of willingness by nations to seriously address the issue. Francis also mentioned the Vatican’s efforts in this field borne from the Synod on the Amazon Region last October. 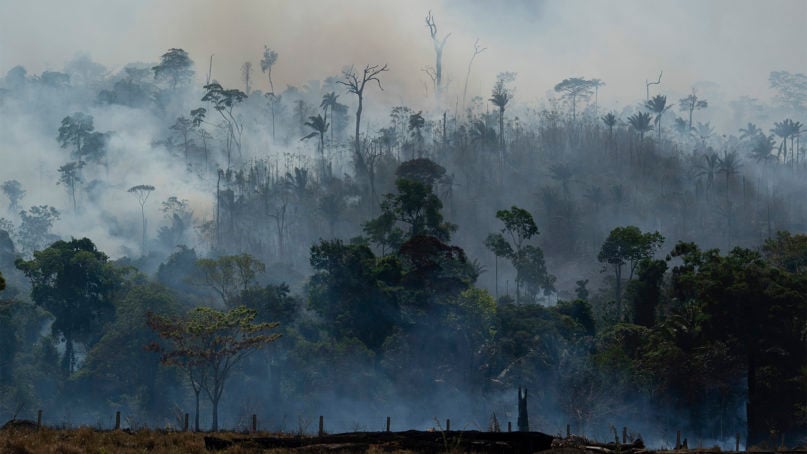 He warned against reducing care for the environment to an “elitist concern,” stating that young people have been at the forefront of the environmental battle.

Young people are key to promoting a stable and lasting peace through dialogue and education, the pope said. For this reason, Francis will be attending and promoting a global event in May, Reinventing the Global Compact on Education, to promote intergenerational dialogue, which he said has “sadly been lacking in recent years.”

“It was very interesting to hear the Pope sketching his vision of this year’s planned Global Education Compact,” said Hungary’s ambassador to the Holy See, Eduard von Habsburg, in a message to Religion News Service after the meeting with the pope.

“As a father of six I am especially thankful that he mentioned that the first, and most important, place for education is the family,” he added.

“Education is not limited to school and university classrooms,” Francis said. “It is principally ensured by strengthening and reinforcing the primary right of the family to educate, and the right of churches and social communities to support and assist families in raising their children.”

The ill treatment of the elderly and abortion, especially in the context of Europe’s demographic winter, are examples of the lack of intergenerational solidarity, according to the pope.

The pope did not neglect to mention the great deal of harm Catholic clergy have inflicted, especially on the young, through acts of abuse and violence, once more stating the Vatican’s determination to ensure the protection of children in the footsteps of last year’s gathering of bishops at the Vatican on this topic.

“The Holy See has renewed its commitment to bring to light abuses already committed and to ensure the protection of minors through a wide range of norms for dealing with such cases in accordance with canon law and in cooperation with civil authorities on the local and international level,” he said. 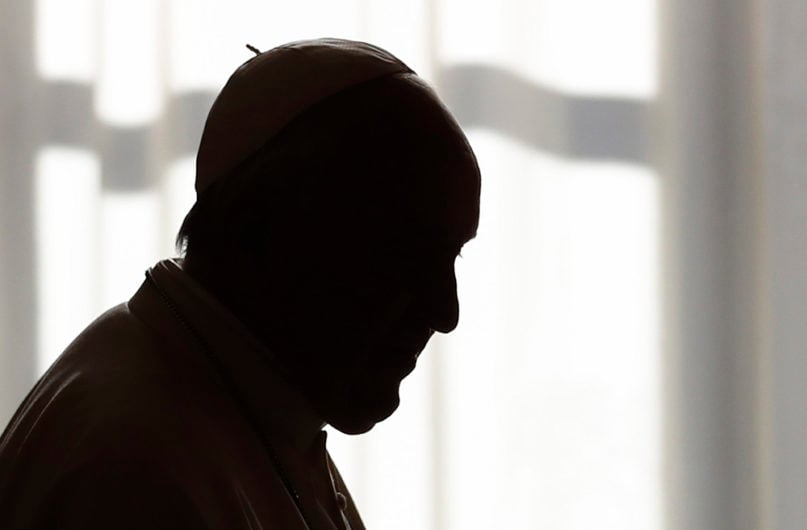 According to the pope, today’s “epochal change” calls for “an educational village” where everyone joins efforts to form and support human relationships, especially for young people.

Inequality, injustice and endemic corruption are at the heart of the political upheaval that has torn apart many countries in South America, according to Francis, who cited Venezuela in particular. In African countries, the pope reported a mix of positive and negative politics. While the countries of Madagascar, Mozambique and Mauritius, which he visited last year, represent models of inclusivity and dialogue, others in the rest of the continent continue to suffer due to war and violence.

He also voiced his hope to visit the troubled country of South Sudan during the course of the year. Francis hosted a meeting at the Vatican between the opposing leaders of Sudan in April, where he famously knelt to kiss their feet in a plea for peace. The event was co-hosted by Anglican Archbishop Justin Welby of Canterbury and the former moderator of the Church of Scotland.

“The pope’s continued encouragement will be vital in helping South Sudan’s leaders build trust and allow them to establish a new government,” said Sally Axworthy, the British ambassador to the Holy See, in an email to RNS on Thursday.

“The Pope’s concern about conflicts, including those that are at risk of being forgotten, is much appreciated. We look forward to working with the Holy See in the year ahead on conflict resolution,” she wrote.

Concerning Europe, the pope called member states to resolve the “frozen conflicts” in the western Balkans and in Georgia, insisting that “dialogue – not arms – is the essential way to resolve disputes.”

More importantly, he insisted the European Union return to the principles of charity and peace that inspired it, especially in light of the 30th anniversary of the fall of the Berlin Wall, which he said is a reminder of the dangers of focusing on division rather than unity.

“The fire at Notre Dame Cathedral in Paris showed how even what seems so solid can be fragile and easily destroyed,” he said. “The damage suffered by an edifice that is not only precious to Catholics but important for all of France and the whole of humanity has revived the question of Europe’s historical and cultural values, and its deeper roots.”

The divided and war-torn global reality has contributed to a growing number of internally and externally displaced people, who often fall prey to human traffickers. This modern-day slavery and immigration have been at the heart of this pontificate and will likely remain a top priority.

“It is increasingly urgent that all states accept responsibility for finding lasting solutions,” Francis said. “For its part, the Holy See looks with great hope to the efforts being made by many countries to share the burden of resettling refugees, in particular those fleeing from humanitarian emergencies, and to provide them with a secure place in which to live, education and possibilities for employment and reunion with their families.”

In honor of the 75th anniversary since the founding of the United Nations, where the Vatican has a permanent observer, Pope Francis called for a reform of the international organization to better reflect the “present geopolitical context.”

During his trip to Japan last year, Francis experienced firsthand the damage that war can inflict on a nation and its people when he visited the sites of the nuclear bomb attacks on Hiroshima and Nagasaki. As he did then, Francis called the possession and use of nuclear weapons “immoral.”

“The time has come for political leaders to realize that a safer world comes about not by the deterrent possession of powerful means of mass destruction, but rather by the patient efforts of men and women of goodwill who devote themselves concretely, each in his or her own field, to building a world of peace, solidarity and mutual respect,” he said.

The pope’s final words were about the role and importance of women.

“It is my hope that the invaluable role of women in society may be increasingly acknowledged worldwide and that all forms of injustice, discrimination and violence against women come to an end,” he said.