LOS ANGELES (RNS) — To Cyntoia Brown-Long, it’s not just the unborn who need protection and respect, but also the marginalized and forgotten.

Since her much-publicized release in August from the Tennessee Prison for Women, where she had been serving a life sentence for killing a man who solicited her for sex at 16, Brown-Long has advocated for incarcerated people and publicly spoken about her spiritual journey behind bars.

She has appeared at The Riverside Church in Manhattan and at Christ Church Cathedral in Nashville. She wrote an opinion piece for The Washington Post highlighting young women who were victims of trafficking and serving time in jail. She also wrote a book, titled “Free Cyntoia: My Search for Redemption in the American Prison System.”

And on Saturday (Jan. 18), Brown-Long will be the keynote speaker at OneLife LA, an anti-abortion event hosted by the Archdiocese of Los Angeles. It begins at 11 a.m. on Olvera Street with a youth march and ends with a festival and informational booths about foster care, human trafficking, immigration and homeless services. The gathering is described as a way to “celebrate the beauty and dignity of every human life from conception to natural death.”

Brown-Long, who was released from prison after she was granted clemency, said she found OneLife LA encouraging because it approaches the issue in a holistic way.

She said it’s just as important to advocate for those who are homeless and victims of human trafficking. 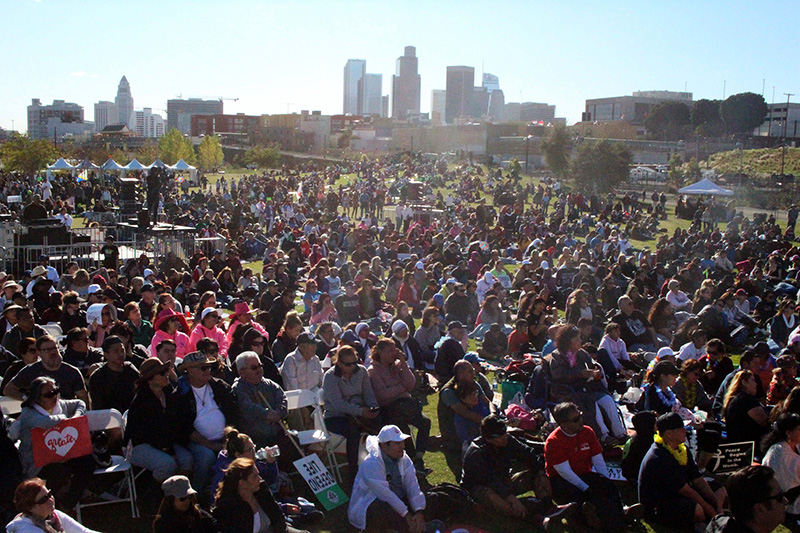 Attendees listen to speakers at the OneLife LA rally on Jan. 20, 2018, in Los Angeles. RNS photo by Heather Adams

OneLife LA began in 2015 when about 15,000 people gathered in downtown LA for the event. Now, the gathering attracts about 30,000 people, said Kathleen Domingo, head of the archdiocese’s Office of Life, Justice and Peace.

Archbishop José H. Gomez, in a statement, described the event as a movement.

“It is a movement of love that sees in every person the beauty of God’s creation, a child of God. Love is the reason for our lives, and love is the reason we commit ourselves to defending the child in the womb, the poor and the homeless, the prisoner and the sick, the elderly and the disabled, mothers in crisis and young people in need of foster care,” Gomez said.

Brown-Long acknowledged she had a tough upbringing. She said she “didn’t feel seen,” and that’s what led her to her former life.

After running away from her adoptive family in Nashville in 2004, Brown took up residence in a hotel with a man known as “Cut Throat.” According to court documents and The Associated Press, the man forced her into prostitution and assaulted her.

She said her spiritual path began when she started taking courses with the LIFE program at Lipscomb University in Nashville, which is associated with Churches of Christ. The program pairs traditional students with people serving time in the Tennessee Prison for Women.

Brown-Long said she was under the impression that religious people would look down on her “because of what I had done.”

“I felt I wasn’t good enough,” she said.

“They just really came in and didn’t care about what had happened before,” she added. “It showed me there was nothing that you could do that could separate you from the love of God.”

On Saturday, Brown-Long said, she aims to highlight how important it is to have community support.

“I want to talk about how that changed day life,” she said. News
Canadian churches on First Nations land are burning
Follow us on Facebook!
Submit your photos to RNS