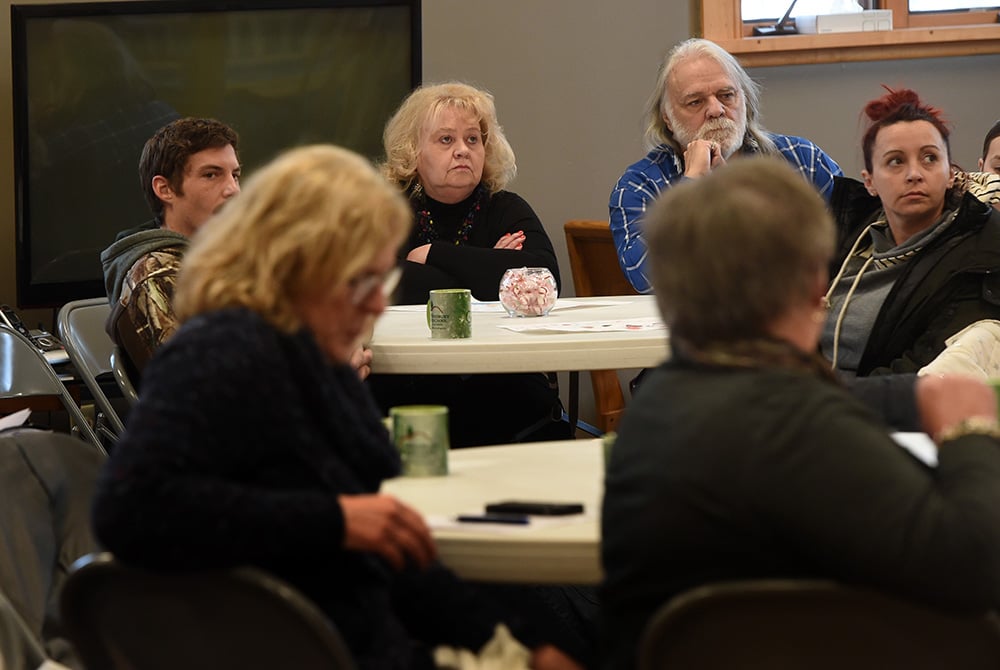 Cheryl and William Gackstetter, center, listen during a congregation meeting to discuss impending changes to the membership of The Grove United Methodist Church in Cottage Grove, Minn. on Sunday, Jan. 12, 2020. The church, seeking to attract more young families, will close for several months later this year. Current members, most of them over 60 years old, will be invited to worship somewhere else when the church reopens. (Scott Takushi / Pioneer Press)
January 31, 2020
Emily McFarlan Miller

Attendance had been dropping steadily for years, and the handful of members keeping things running was growing exhausted. While the church was still making its budget, the writing was on the wall for the aging congregation of about three dozen in Hutchinson, Minnesota, a 90-minute drive outside of the Twin Cities.

Plans were made to welcome a pair of new pastors to lead Vineyard and merge the congregation with a larger church in town. When the merger fell apart, the young pastor-couple and their older congregants had a choice: change or close.

They chose to change. They pulled out pews installed by members’ grandparents. They cancelled events like an annual turkey dinner, a beloved community tradition, to focus on discussions about the church’s vision. They gradually tweaked services Sunday over Sunday.

The first few changes were the hardest. But each one built trust for the next.

“Everything we did, every meeting we had, every conversation we had, we just tried to be kind of like cheerleaders almost,” said co-pastor Jim Hein.

While painful for many longtime church members, advocates say a restart can help reverse shrinking numbers and breathe new life into congregations. But leaders have to be careful not to alienate older members of the congregation, who may feel they are being pushed out to make room for new people — as a church in the Twin Cities recently discovered.

Vineyard relaunched in October with an average attendance of about 85 people. It's one of several successful church "restarts" in the Dakotas-Minnesota Area of the United Methodist Church, according to its bishop, the Rev. Bruce Ough. Restarts have been part of the United Methodist Minnesota Annual Conference’s “Journey Toward Vitality” since Ough took office about seven years ago, he said.

That strategic plan also includes helping churches “relaunch their lifecycle” without closing and starting over, as well as planting new churches, offering online worship options, starting new worship services for populations who don't already attend church and reaching out to immigrant and ethnic populations, according to the bishop. 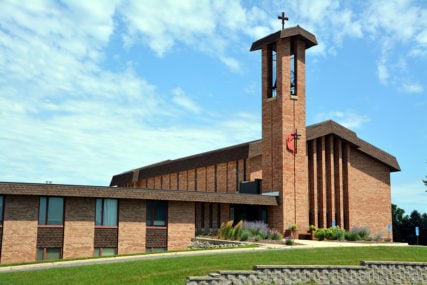 It seems to be working.

The Minnesota Annual Conference has been in decline “for as long as anybody can remember,” Ough said, closing churches and losing 1% to 2% of its average worship attendance every year.

In 2018, it turned the corner and had a small increase in its average worship attendance for the first time, he said. That 1% increase brought its average weekly attendance to 28,968, according to the conference.

But a restart is never easy. And sometimes things can go sideways.

That was the case at a church near the Twin Cities that made headlines recently where older members accused church leaders of kicking them out of the congregation.

That merger created a new multi-site church known as The Grove United Methodist Church, which continued to meet in both locations.

“The hope was that by bringing together the two congregations — one that was much larger and had many more resources — that there could be a renewed sense of mission on both campuses and that we would be able to revitalize the Peaceful Grove campus,” Wetterstrom said.

While the campus in Woodbury has swelled to about 400 people, the campus in Cottage Grove has “continued to struggle and experienced decline,” he said. Lay leader Ron Purcell speaks during the Sunday morning worship service at The Grove United Methodist Church in Cottage Grove, Minn. on Jan. 12, 2020. The church, seeking to attract more young families, will close for several months later this year. Current members, most of them over 60 years old, will be invited to worship somewhere else when the church reopens. (Scott Takushi / Pioneer Press)

A small group of about 30 people meets at the Cottage Grove campus, with lay people leading the services since The Grove leadership decided the church didn’t have the resources to employ another pastor there. Wetterstrom described the congregation as faithful and close-knit, saying they are “devoted and dedicated to how they care for one another within their campus and their life together.”

But leadership has struggled to revitalize the campus and welcome new members as the population of the city around it has boomed.

So when the Minnesota Annual Conference hired the Rev. Jeremy Peters last spring to plant a new church in Cottage Grove, The Grove leadership decided a partnership made sense, Wetterstrom said.

By the fall, the conference had presented a proposal to launch that church using The Grove's campus in the city, according to Peters. The plan involves closing the Cottage Grove campus in June and reopening it sometime later this year.

Members who worship there were asked to attend services instead at the campus in Woodbury — at least for 15 to 18 months in order to "let the new culture and norms take root,” Peters said. Church leaders also have discussed options like starting a service for members coming from Cottage Grove to continue their lay-led worship in Woodbury.

And if those current Cottage Grove members feel “called” to the new vision and worship style the restart will have, they would be welcomed, he said.

“This has to do with mission, not age,” Wetterstrom added.

However, longtime members of the Cottage Grove campus, who are mostly older, feel they have been singled out and that their church is being taken away from them, according to media reports.

“This is totally wrong,” member Cheryl Gackstetter told the Pioneer Press. “They are discriminating against us because of our age.”

Kristin DuMez, professor of history at Calvin University in Grand Rapids, Michigan, knows how painful a church closing can be.

DuMez said that when the Christian Reformed Church her grandparents attended in Sioux City, Iowa, was shut down about 20 years ago, it was called a “rebirth.” The denomination planted a new church nearby, and her grandparents and the existing congregation was encouraged to “scatter” to other churches in the area to give the new church a fresh start, she said.

While that was happening, her grandfather passed away, she said.

“What that meant is that my grandmother — who for over 50 years had been a member, this was her church community — was alone really without the spiritual support,” she said.

For her grandparents, leaving the church wasn’t just leaving a building, DuMez said. It also was leaving a network of people who had been there through births and deaths, new jobs and lost jobs. They’d served on the church council and staffed the nursery and raised their families together.

Her grandmother passed away last year, she said. She’d spent the last 20 years of her life without a church home, without a community to minister to her. 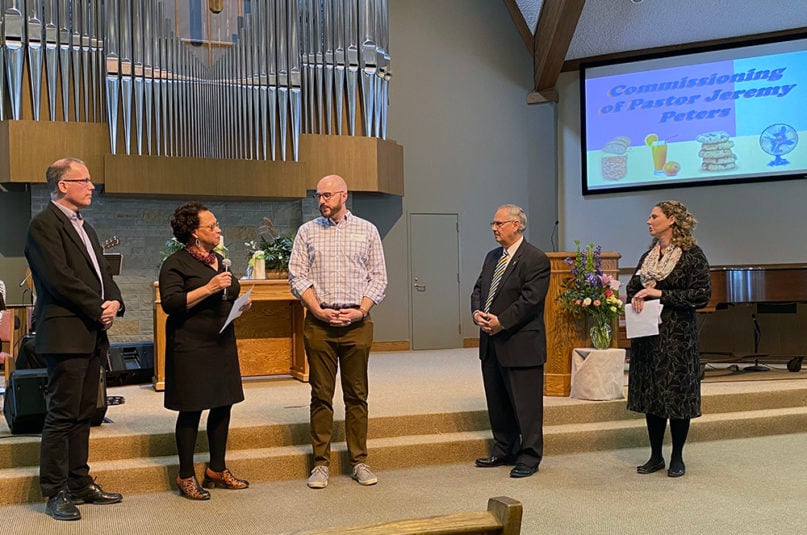 The Rev. Jeremy Peters, center, is commissioned at The Grove's Woodbury campus on Sunday, Jan. 26, 2020, in Woodbury, Minnesota. Courtesy photo

The professor said her grandparents' experience has made her question what the purpose of a church is.

“Is it a community of the faithful, or is it a missions organization for outreach?” she said. “Ideally, it's always part of both, but, you know, maybe every church can't be all things to all people.”

Though painful, a restart may be necessary when a church is declining, aging and unable to keep up with its finances or building, according to the Rev. Dottie Escobedo-Frank, a United Methodist pastor and author of “Restart Your Church.”

“What I realized is that in the Methodist churches we have, many churches are declining. We've been trying to revitalize for decades, and we haven't been successful at it, and we needed to do something else,” Escobedo-Frank said.

The United Methodist Church remains the largest mainline Protestant denomination in the United States with just under 7 million U.S. members, according to the denomination. But that is down from more than 10 million in the 1960s and '70s.

Escobedo-Frank said the idea for a restart comes from the central story of the Christian faith: the death and resurrection of Jesus. It also comes from restarting a computer that has become stuck.

The most successful restart model involves closing a church for six months to a year, then reopening a new church in its place, according to the pastor-author. It also involves moving that church’s members to another congregation, because "if you have the same DNA there, then the same thing will happen,” she said.

But it's also the most difficult restart model, she said. Nobody wants to watch their church die.

On Sunday (Jan. 26.), The Grove's Woodbury campus held a commissioning for Peters and its new Cottage Grove campus.

The service had been planned before the recent controversy, but, Peters said, "It was a beautiful end to a crazy, crazy, chaotic week, and really, it really helped us to turn the page to figure out how to move forward."

The pastor is hopeful for the future of the church in Cottage Grove, but he knows shutting down the campus won't be easy for those who have attended church there for decades.

"Many of them literally built that church," he said.

Hein doesn’t minimize how hard the restart was for longtime church members at the Vineyard, either — but he said many who had concerns were won over through the process. 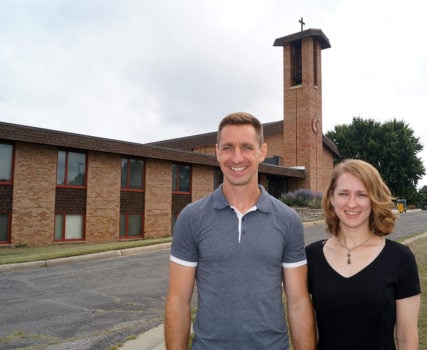 It wasn't the first declining church Hein’s wife and co-pastor, the Rev. Sara Hein, had led. After six years at a Presbyterian church, she had helped members close the doors on the church’s last Sunday.

“That gave her a lot of perspective,” the Rev. Jim Hein said. “These churches really can and do close, and if you don't do something — something big or something noteworthy — this is going to be the end result for a lot of churches in America.”

At Vineyard, the pastor-couple opted for a "soft close” of the church, making changes gradually during Sunday worship services and canceling all other church activities that weren’t related to the restart. They offered pastoral care to longtime members and organized “relaunch groups” to hear members’ ideas, share their plans and identify leaders who could help with projects like remodeling the building or welcoming visitors.

They called church members when they didn’t see them at church on Sunday, sent postcards inviting neighbors to the relaunch, reached out to community groups on Facebook for help with things like music or PowerPoint slides and struck up conversations about the church with their running group and others they met in the community.

While the church has doubled in size since its restart, the pastors try to be mindful of its longtime members, Hein said. The praise band makes sure to work in favorite hymns alongside more contemporary songs.

And they've brought back the beloved turkey dinner.

The pastor is excited about the positive things happening at the church and longtime members inviting new people to join them. Those members appear to be excited, too.