(RNS) — “The ancient Greeks had four words for love,” the narrator intoned.

I froze, with a guacamole-laden tortilla chip perched inches from my watering mouth, wondering if one of my kids had inadvertently changed the channel away from the Super Bowl. What could ancient Greek, and words I learned my first semester of seminary, possibly be doing amid the most expensive ad buy of the year?

As the 60-second spot for New York Life unfolded before my eyes, I was amazed to hear an explanation of these four aspects of love.

The insurance company’s ad continued: “The first is philia — philia is affection that grows from friendship. Next, there’s storge – the kind you have for a grandparent or a brother. The third is eros, the uncontrollable urge to say ‘I love you.’ The fourth kind of love is different. It’s the most admirable. It’s called agape – love as an action. It takes courage. Sacrifice. Strength.”

If those sound familiar, chances are it’s because of C.S. Lewis, the 20th-century Anglican academic, Christian and author of the beloved “Chronicles of Narnia,” who wrote about them in a book titled “The Four Loves.” In it, he highlighted the same four types of love delineated by New York Life: storge (affection), philia (friendship), eros (romantic) and agape (charity).

Now, at one level, I should be grateful that an insurance company with deep enough pockets to afford a Super Bowl ad has added a nuanced definition of love to the public conversation. In between brain-rattling tackles and blatant consumerism was planted a seed of beauty and joy, inspiration and hope.

Yet it was New York Life’s definition of agape that caused my initial excitement to morph into “Stay in your lane, you behemoth, soulless insurance company!”

Because for Lewis and for Christians more broadly, agape, that greatest of all loves, is the unconditional, all-encompassing, selfless, divine love embodied in Jesus Christ. Christ’s love is freely given with no expectation of return. And while Jesus makes a claim upon his followers, it has nothing to do with filing an insurance claim, and everything to do with baptismal identity.

In other words, to fully know agape love is to experience it, to live it, to embody it. It’s why the action of divine love is radically borne out in the parable of the good Samaritan (Luke 10:30-35). Agape love knows no bounds or limits. It reflects the fullness of God’s love for humanity, and the often aspirational ways we are invited to love one another.

Which is why when New York Life claims that “For 175 years, we’ve been helping people act on their love,” the claim — at least to people of faith — rings hollow.

There’s a reason the early Christians gathered to partake in agape meals or “love feasts,” a practice that continues in the ritual action of the Eucharist. They knew that love in the abstract was nothing compared with the embodied love of relationship with God and one another. It’s not easy, and it can’t be explained in a one-minute television commercial.

But, hey, we’re talking about a Super Bowl ad for an insurance company, so maybe we’re feeding right into the marketing genius of Madison Avenue. Unless, of course, cranky armchair theologians weren’t the intended target audience.

The real-time tweets calling out New York Life for twisting the concept of agape were epic.

“Nope,” tweeted Jen Munroe-Nathans, a preacher and comedian, “agape is the unconditional love that God has (still) for your ad agency folks even after they created this commercial.”

Nope- agape is the unconditional love that God has (still) for your ad agency folks even after they created this commercial.

That New York Life commercial did what so many preachers do when they decide to bust out some Greek (or Hebrew) in their sermons — show that they don’t actually know what they’re talking about,” tweeted Lutheran pastor Ryan Bailey.

That New York Life commercial did what so many preachers do when they decide to bust out some Greek (or Hebrew) in their sermons — show that they don’t actually know what they’re talking about. #SuperBowlLIV #agape

In the end, Christians already have a life insurance policy — one that involves the divine, agape love of our Lord, rather than the term or whole life policies offered by a Fortune 500 company.

(The Rev. Tim Schenck serves as rector of the Episcopal Parish of St. John the Evangelist in Hingham, Massachusetts. His latest book is “Holy Grounds: The Surprising Connection Between Coffee and Faith.” Follow him on Twitter @FatherTim. The views expressed in this commentary do not necessarily reflect those of Religion News Service.) 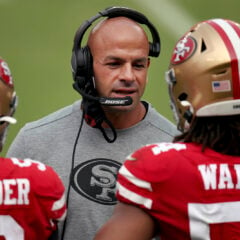