(RNS) — Religious rhetoric is not uncommon on Capitol Hill, where politicians often thread references to the Almighty into speeches while participating in political theater. But in the drama-filled final week of President Trump’s impeachment trial, God was essentially a supporting character.

Senator Lindsey Graham said he used his God-given common sense to decide the impeachment case against President Trump was “BS.”

Senator Mitt Romney declared his faith compelled him to believe the president was guilty of an impeachable crime.

The president himself insisted that faith was a crutch used by his rivals — and admitted that following Jesus’ advice about “loving your enemies” was hard for him.

All three were part of a theological war of words over Trump’s impeachment that has been going on for months, with the commander-in-chief and his opponents invoking the divine and questioning each other’s faith.

Lawmakers from both parties — including Rep. Alexandria Ocasio-Cortez, D-New York, and Rep. Barry Loudermilk, R-Georgia — quoted Scripture in December to shore up their respective arguments regarding the impeachability of the president’s actions. The faith debate heated up days later when the editor of Christianity Today garnered a rebuke from the president for penning a bombshell editorial calling for Trump’s removal from office.

But the God talk escalated in earnest on Wednesday (Feb 5.), when Utah Sen. Mitt Romney, a member of the Church of Jesus Christ of Latter-day Saints, cited his faith while explaining his decision to break with his party and vote to convict Trump of at least one offense.

“I am profoundly religious,” he said in explaining the decision. “My faith is at the heart of who I am.”

Romney’s remark and eventual vote triggered a heated reaction from Donald Trump when the president delivered a speech on Thursday at the National Prayer Breakfast, an annual religious gathering in Washington, D.C.

“I don’t like people who use faith for justification for doing what they know is wrong,” Trump said in a reference to Romney.

The president would voice a similar critique a few hours later during an address at the White House. After celebrating his acquittal, he railed against lawmakers who supported his impeachment and removal from office, singling out Romney in particular.

“And then you have some that used religion as a crutch,” he said, noting that he was referring to a “failed presidential candidate” and suggesting that Romney had “never used” faith in political discourse in the past. 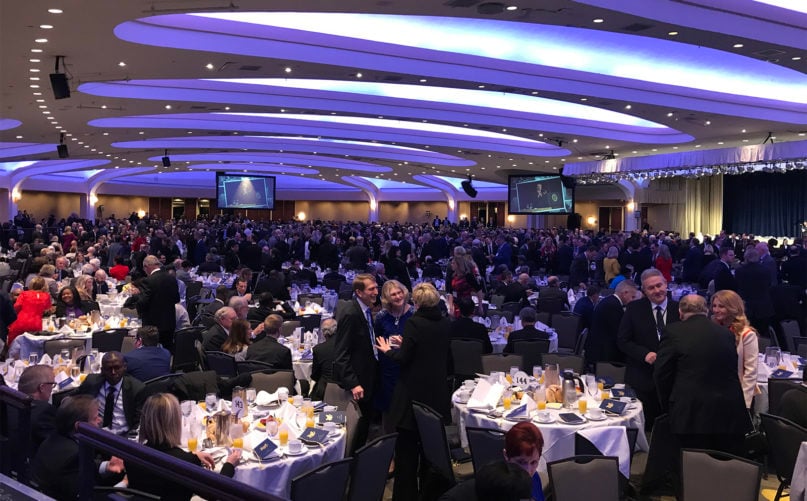 Romney has spoken about his faith often as a politician and once delivered an entire speech on his religious beliefs while running for president in 2007. His office declined to comment on the president’s remarks.

Trump received backup on Thursday from South Carolina Sen. Lindsey Graham, who was asked about Romney during an appearance on “The Brian Kilmeade Show.”

“All I can tell you is that God gave us free will and common sense. I used the common sense God gave me to understand this was a bunch of BS,” Graham said. “They hate Trump, they were going to impeach him the day he got elected and if you can’t see through this, your religion is clouding your thinking here.”

He also doubted Trump’s impeachment would play a role in his pursuit of eternal salvation.

“When I go to meet God at the pearly gates, I don’t think he’s going to ask me, ‘Why didn’t you convict Trump?’ I may be wrong, but I don’t think that’s going to be at the top of the list,” Graham said.

Romney wasn’t the only target of Trump’s righteous fury, however. The president also upbraided Democratic House Speaker Nancy Pelosi during his National Prayer Breakfast speech, saying that he also doesn’t “like people who say ‘I pray for you’ when they know that is not so.”

The line of attack — an apparent reference to Pelosi’s insistence that she has prayed for the president throughout the impeachment process — was repeated later that day when Trump spoke at the White House.

“She doesn’t pray,” he said, referring to Pelosi. “She may pray, but she prays for the opposite. But I doubt she prays at all.”

Donald Trump Jr., the president’s son, piled on via Twitter, saying that the “likelihood of Nancy Pelosi praying for Trump is about the same as the likelihood of Satan running around quoting the Scriptures.”

The figure of Satan does, in fact, quote scripture multiple times in the Christian Bible. Moreover, Pelosi, who is Catholic, delivered a prayer at the prayer breakfast for those who are suffering from religious persecution — as Trump sat just feet away.

“I don’t know if the president understands prayer or people who do pray,” she said in response to Trump, according to ABC News. “I pray very hard for him, because he’s so off the track.”

The back-and-forth infuriated progressive-leaning faith leaders such as the Rev. James Martin, who tweeted that the president’s address at the National Prayer Breakfast was “disgusting,” “self-serving” and “mean-spirited” and was used as an excuse to target his enemies.

“And at the heart of the Christian’s relationship with Jesus Christ is a profound reverence for his teachings, including ‘Love your enemies and pray for those who persecute you’ (Matthew 5:44). And the last place that one should flaunt one’s vanity or ignore Jesus’ teachings is in the setting of prayer,” Martin tweeted, calling on Catholic leaders to boycott the prayer breakfast in the future if it included speeches like Trump’s.

MSNBC host Joe Scarborough struck a similar tone Friday morning on his show “Morning Joe.” He held aloft a Bible and read from it on air, arguing that Trump’s remarks rejected the message of the National Prayer Breakfast’s keynote speaker, which was rooted in the biblical command to love one’s enemies.

“Anybody that has grown up in a church — evangelical church, Catholic Church, Christian church — understands the blasphemy there,” he said. He later added: “It was the words of Jesus Christ (Trump) was disagreeing with.”

Scarborough also criticized evangelical faith leaders who support Trump, some of whom celebrated the president’s acquittal this week. Stephen Strang, publisher of the conservative Christian magazine Charisma, wrote that Christians were “rejoicing” Trump’s acquittal and that the argument for impeachment “never had any substance.”

Strang also challenged Romney’s integrity, despite having backed the Utah Senator’s bid for the presidency in 2012.

“I regret that I ever endorsed him for president in 2012,” Strang wrote. “We knew then he was not a strong leader and that he had flip-flopped his entire political career, and he has done it again. He will live to regret his decision.”