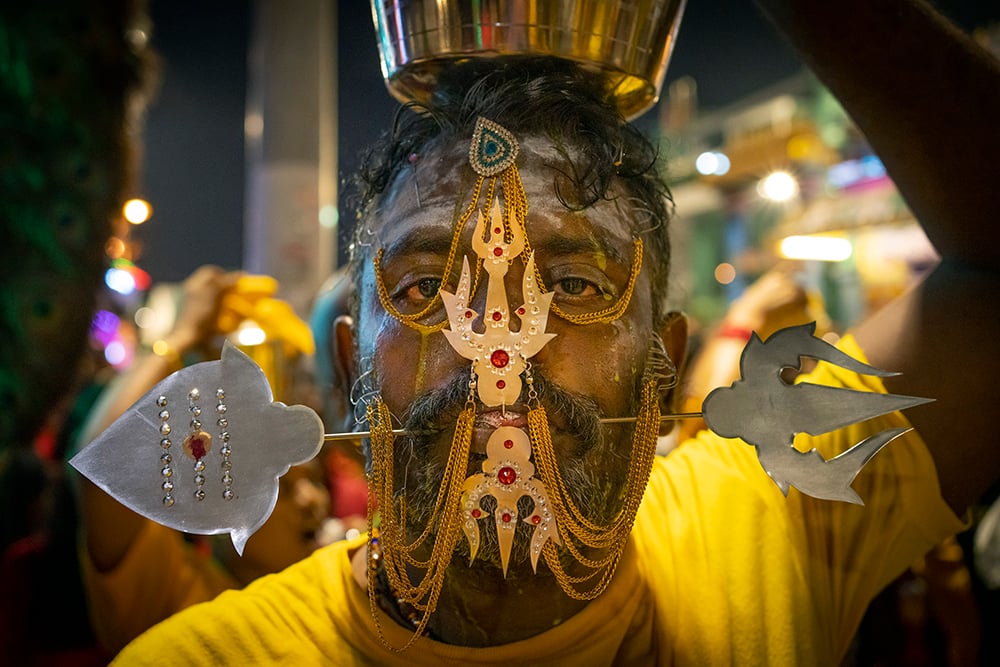 A Hindu devotee carries a milk pot on his head, with his cheek pierced with a metal rod, in a procession during the Thaipusam festival at Batu Caves, on the outskirts of Kuala Lumpur, Saturday, Feb. 8, 2020. Thaipusam, which is celebrated in honor of Hindu god Lord Murugan, is an annual procession by Hindu devotees seeking blessings, fulfilling vows and offering thanks. (AP Photo/Vincent Thian)
February 16, 2020
Kit Doyle

(RNS) — Each week Religion News Service presents a gallery of photos of religious expression around the world. This week’s gallery includes the patron saint of beekeepers, mass shootings in Thailand, Thaipusam festival in Malaysia, and more. 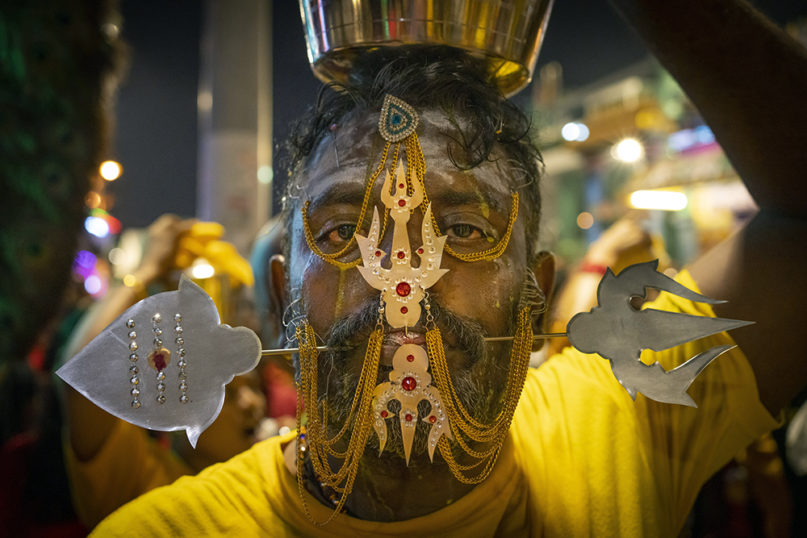 A Hindu devotee carries a milk pot on his head, his cheeks pierced with a metal rod, in a procession during the Thaipusam festival at Batu Caves, on the outskirts of Kuala Lumpur, Saturday, Feb. 8, 2020. Thaipusam, which is celebrated in honor of Hindu god Lord Murugan, is an annual procession by Hindu devotees seeking blessings, fulfilling vows and offering thanks. (AP Photo/Vincent Thian) Kavadi offering cages are carried by Hindu devotees in a procession during the Thaipusam festival at Batu Caves, on the outskirts of Kuala Lumpur, Malaysia, Saturday, Feb. 8, 2020. Thaipusam, celebrated in honor of Hindu god Lord Murugan, is an annual procession in which Hindu devotees seek blessings and offer thanks. (AP Photo/Vincent Thian) 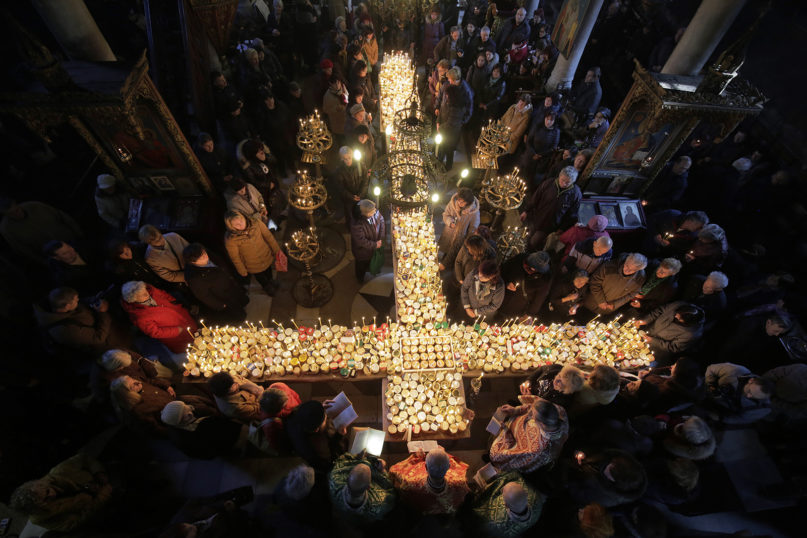 Worshippers gather around candles stuck to jars of honey, arranged as a cross, during a Mass for the 'sanctification of honey' at the Presentation of the Blessed Virgin Church in the town of Blagoevgrad, 60 miles south of the Bulgarian capital of Sofia, Monday, Feb. 10, 2020. Honey and beehives are sanctified by performing a ritual for health and rich harvest, marking the day of St. Haralampus, Orthodox patron saint of beekeepers. (AP Photo/Valentina Petrova) 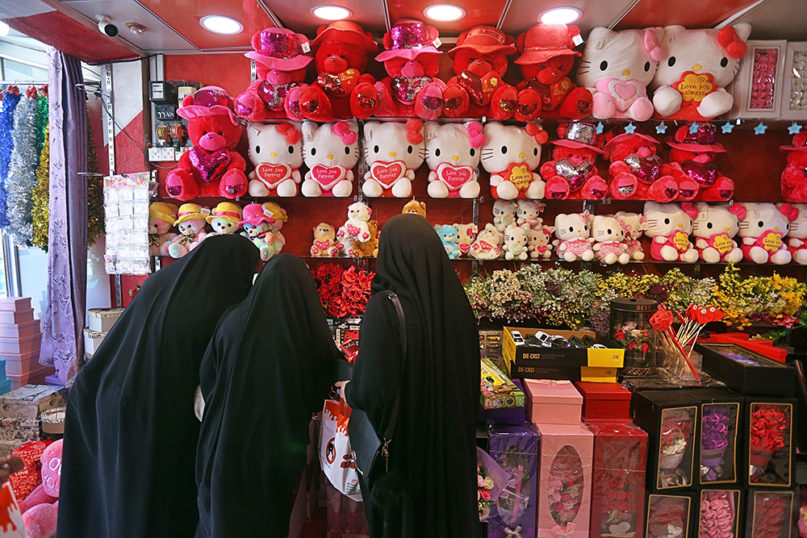 Women shop for Valentine's Day gifts in Najaf, Iraq, Thursday, Feb. 13, 2020. In recent years, Valentine's Day in Najaf has emerged as a point of contention. It pits revelers and personal freedom advocates who see it as harmless fun against conservatives who view it as sacrilegious foreign celebration that has no place in a holy city like Najaf. (AP Photo/Anmar Khalil) 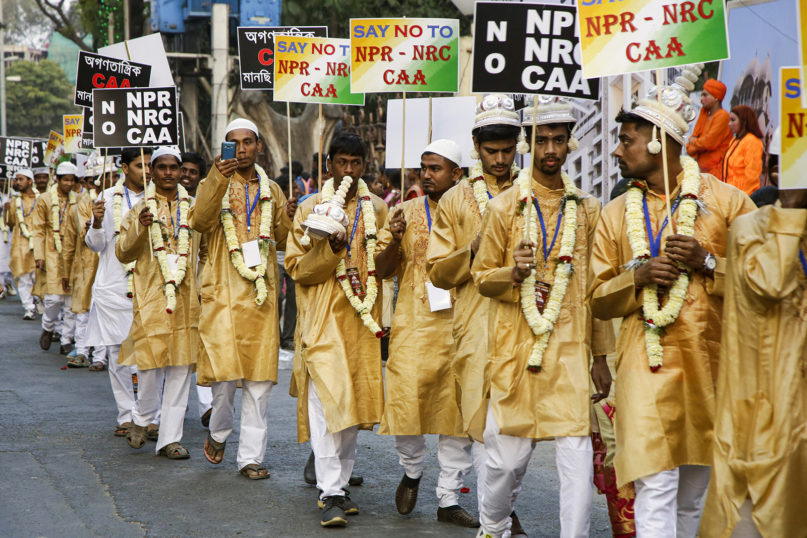 Indian grooms walk in a procession holding placards against a new citizenship law as they proceed to a mass marriage ceremony for more than 80 couples of various religions on Valentine's Day in Kolkata, India, Friday, Feb. 14, 2020. Mass weddings in India are organized by social organizations primarily to help economically struggling families who cannot afford the high cost of a separate ceremony on top of the customary dowry and expensive gifts that are still prevalent in many communities. (AP Photo/Bikas Das) 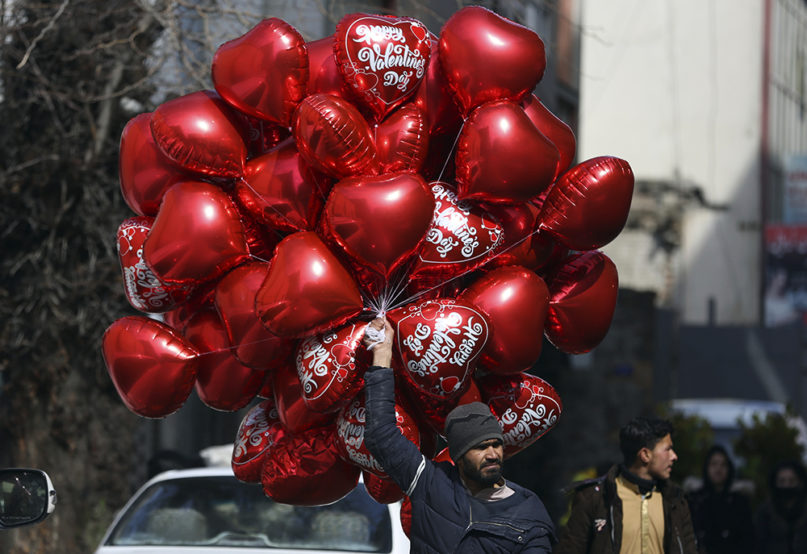 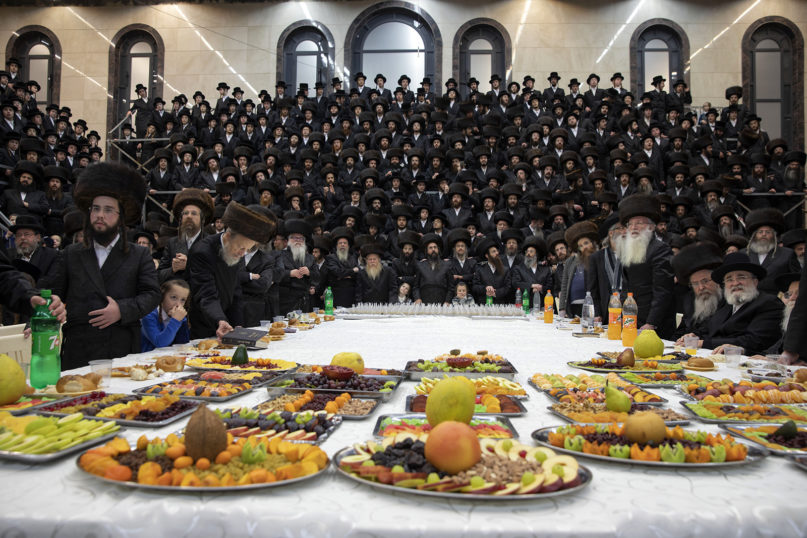 Ultra-Orthodox Jews celebrate the Jewish feast of 'Tu Bishvat' or "New Year of the Trees." as they sit with their rabbis around a long table filled with all kinds of fruits, in the ultra-Orthodox town of Bnei Brak, Israel, Monday, Feb. 10, 2020. (AP Photo/Oded Balilty) 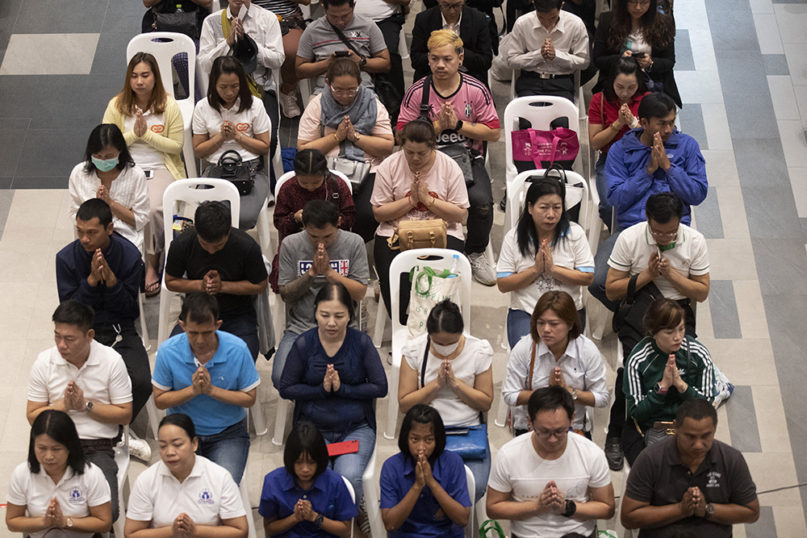 People pray during a ceremony to reopen the Terminal 21 shopping mall in Nakhon Ratchasima, Thailand, Thursday, Feb. 13, 2020. The worst-ever mass shooting in the country took place at the mall over the weekend, with a total of 29 people shot dead by a disgruntled soldier. (AP Photo/Sakchai Lalit) Buddhist monks perform rituals at Wat Pa Sattharuam Buddhist temple in Nakhon Ratchasima, Thailand, Monday, Feb. 10, 2020. The secluded temple complex in the northeastern Thai province had opened its gates for Buddha Day, allowing in dozens of devotees, when a soldier from the neighboring Army base roared through in a stolen Humvee, fatally shooting nine people, including a 13-year-old boy, and injuring more. (AP Photo/Gemunu Amarasinghe) 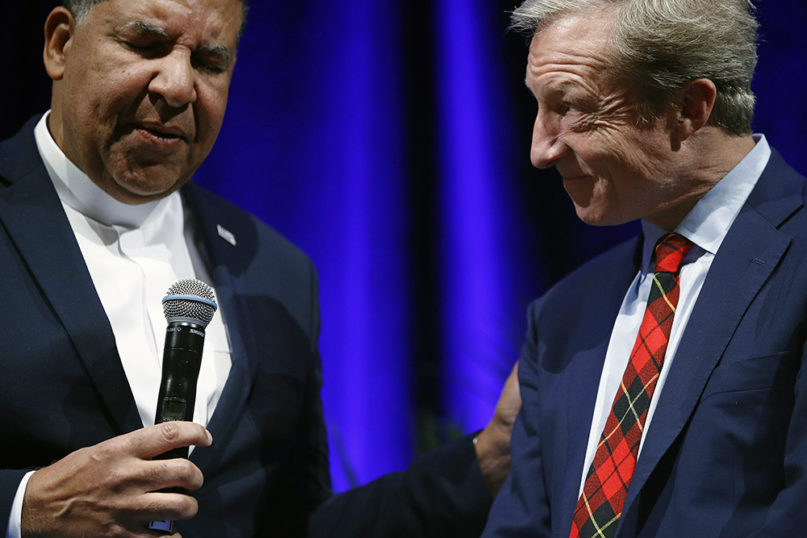 Demonstrators walk on a painting of the U.S. flag in front of the Azadi (Freedom) Tower during an annual rally celebrating the 41st anniversary of the Islamic Revolution, in Tehran, Iran, Tuesday, Feb. 11, 2020. Iranians took to the streets of Tehran and other cities and towns across the country on Tuesday for rallies and nationwide celebrations marking the anniversary of the 1979 Islamic Revolution when followers of Ayatollah Khomeini ousted U.S.-backed Shah Mohammad Reza Pahlavi. (AP Photo/Vahid Salemi)