FRESNO, Calif. (RNS) — Doug Pagitt, 6 feet, 7 inches of humming optimism topped with a trademark blue fedora, is striding across the chancel of the United Church of Christ at a rally for Vote Common Good.

“People often ask two questions; I promise you I’ve heard both of them today in this building. Question number one: ‘Do you really have hope?’ I do! But I am a born optimist,” he tells the crowd of 30 or so. “The second question is, ‘Don’t you feel like you’re preaching to the choir when you do these events?’”

By “choir,” Pagitt means white Christians. By Nov. 3, he means Election Day 2020, when, Pagitt believes, President Donald Trump will be voted out of office. 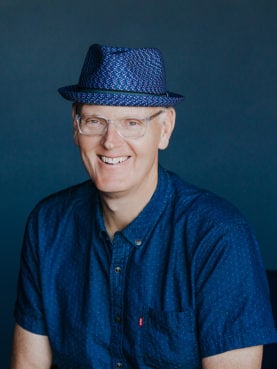 Of white evangelical Christians, 81% voted for Trump in 2016, in keeping with their voting habits dating to the Reagan era. Among white Catholics, 65% did the same, up from the 59% who voted for Republican nominee Mitt Romney in 2012, according to the Pew Research Center.

Evangelicals have been so steady in their support for Trump — through the “Access Hollywood” tape, the president’s lawyer going to prison for covering up his boss’s alleged extramarital affair, and his recent coopting of the National Prayer Breakfast to accuse House Speaker Nancy Pelosi of not praying — that political observers often ask what it would take to pry conservative Christian voters away.

The long-shot effort is nothing more than a logical next step in Pagitt’s long trajectory as an evangelical leader. His name first popped up in the early 2000s as part of a young, progressive group known today as the emergent church movement. The group challenged evangelical norms about liturgy and theology, and eventually politics. The movement wound up with a progressive, community-oriented model that looked to Catholic, Anabaptist and Eastern Orthodox tradition as much as to Protestantism. Mark Scandrette, a former emergent pastor who sometimes takes one of the dozen bunks on Pagitt’s bus, freely name-checks grunge rocker Kurt Cobain and sometimes cites the ’90s movie “Reality Bites” to make his points.

Pagitt, an early leader in the movement, founded Solomon’s Porch, a “holistic missional Christian community” in Minneapolis, in 2000. The church still meets today in a sanctuary filled with a circle of armchairs and couches instead of pews. At the end of 2019, he stepped down from his role at the church, noting “Twenty years is enough,” and devoted himself full time to speaking, writing and activism.

Pagitt doesn’t see Vote Common Good as a departure from his work at Solomon’s Porch. The grunge-rock emergent church ethos, he said, has just evolved — because its message, while thoughtful and even beautiful, had never made a major impact on the church.

“I think the election of Donald Trump via the support of evangelicals in America is a leading indicator of the lack of effectiveness of the work I’ve been doing for the last 25 years,” Pagitt said after the UCC event.

“It’s like we build a retaining wall to hold the soil up, and the wall collapses, and it’s like, ‘Yeah, but the bricks were really well designed and beautiful.’ That wasn’t the point.” 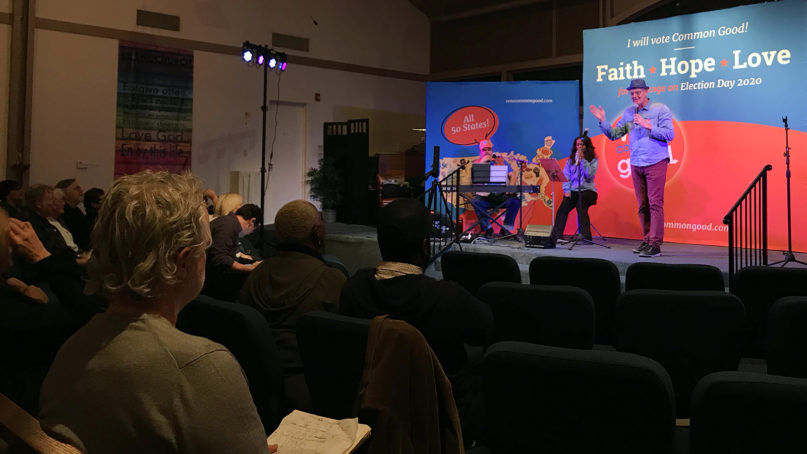 Doug Pagitt, right, speaks during a Vote Common Good rally at a United Church of Christ in Fresno, California, on Jan. 19, 2020. Photo by Isaiah Murtaugh

But he’s not disappointed: “I’m just a realist. Like, well, that didn’t work, so now what are we going to do? I think we realized we had no idea how much weight there was going to be on that retaining wall. We thought we could build it with those little pavers. Now we gotta come in like it’s New Orleans and we’re going to have to, y’know, build a levee.”

Over dinners, meetings and retreats, Pagitt and his progressive Christian network hatched the idea for a bus tour, bent on reframing the idea of a Christian voter from what they see as self-interested to interested in the “common good.”

“Jesus named the common good as the kingdom of God. It means whatever you are doing as a Christian needs to be for people who don’t belong to you,” said Samir Selmanovic, a former emergent church pastor who has been with Pagitt from the start. “God’s concern and presence is not circumscribed by our tribe or identity. You find God in the other, always.”

Their first bus tour was in 2018: a two-month barnstorming run through 31 congressional districts they thought might flip from red to blue in the 2018 midterm elections. Pagitt says 16 of those districts wound up electing Democrats, but he admits that tour organizers may have just picked their districts well.

This year’s tour is more ambitious. The big orange bus is scheduled for stops in all 48 lower states by April 4. After a few weeks’ break, Vote Common Good will hit the road again, touring until a final stop on Election Day, outside the White House.

The tour is partly funded by Pagitt’s large network of progressive evangelical friends, but he fundraises on the trail, too, asking rally guests to donate and making fundraiser stops along the way. (A friend of Pagitt’s in Los Angeles hosted one at her home the day after the Fresno rally). 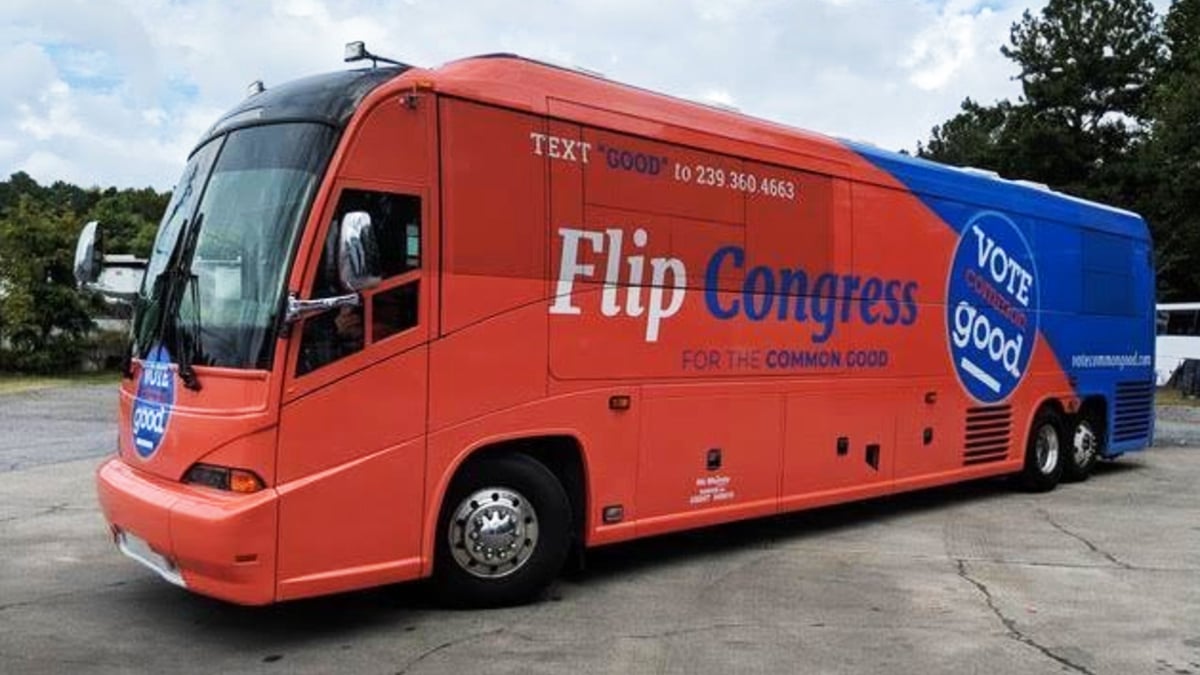 The Vote Common Good bus in 2018. Photo courtesy of VCG

A Vote Common Good rally resembles a progressive evangelical open mic night. The lineup gets tweaked at every tour stop, based on who has hopped on the bus for a few days and which local politicians, activists and faith leaders are stopping by. Tonight, in this small suburban church, it’s music from the Rev. Vince Anderson, vocalist Meah Pace and local activist pastor Trena Turner.

Patrick Carolan, VCG’s director of Catholic outreach, about how he went from corporate America to Franciscan Catholic activism. A poem from Scandrette. A funny, then serious story about being an immigrant, from Selmanovic. An adapted biblical parable from local Republican-turned-independent pastor Paul Swearingen. At the end Pagitt ties it all together.

Annie Van Patten, a UCC-Fresno attendee, was not one of the evangelicals who voted for Trump in 2016. “We cried,” she said, referring to election night 2016. 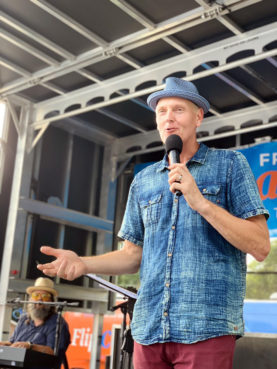 But she does think other evangelicals might join her this year. “I’ve talked with people who voted for Trump and wish they hadn’t.” Her husband, Jack Van Patten, chimes in, “Three years of remorse.” He also attends UCC-Fresno and shares her feelings.

Another church member, Julia Penner-Zook, was less optimistic. “I don’t see a whole lot of shift from (evangelicals who) voted for Trump,” she said, “and the people who are stepping away, I’m not sure would have voted for Trump.”

Indeed, the numbers don’t favor Vote Common Good. A recent AP-NORC poll indicated that 8 in 10 white evangelicals still approve of Trump. They were a little friendlier to Democratic candidates in the 2018 midterm elections — 75% voted for Republican candidates, according to Pew — but that small shift could easily reverse itself when the candidate is Trump.

Pagitt estimates that 5% to 15% of evangelical voters are already fed up with the administration and will vote for pretty much anyone else in 2020. Vote Common Good, he said, is merely trying to help that group along and rebuild the narrative around religious politics — to tell the media, potential voters and Democratic candidates that faith voters are not hard-wired to be Republicans.

Pagitt knows he’s optimistic: Politically moderate evangelical voters might not go for a progressive Democrat or turn against Trump. “But so what?” he says. “Over-optimism is only a problem if it prevents you from acting. I know what pessimism does. It keeps people at home.”