The Rev. Martin Luther King Jr. described 11 o’clock on Sunday morning as the “most segregated hour in America.” This commentary is part of a series by Religion News Service about the future of segregation and integration in American religion, produced in partnership with Sacred Writes, a project that helps scholars share their research with a broader audience. The rest of the series can be found here.

CHARLESTON, S.C. (RNS) — On a Monday night in April 2016, more than 2,000 people packed into Mount Moriah Missionary Baptist Church in North Charleston. The crowd included black and white Christians, both Protestant and Catholic, as well as Reform Jews, Unitarians, local activists and other community members. They weren’t there for worship but to confront racial bias in policing practices.

The gathering was the culmination of months of work by the Charleston Area Justice Ministry, which began in the intimacy of private homes the previous fall. People shared stories of the concerns that kept them up at night. A common refrain, particularly of black residents, was being stopped by the police for no apparent reason. The practice, known as an “investigatory stop,” had led to the murder of a black man named Walter Scott by a North Charleston police officer.

One year later, the justice ministry demanded an independent audit of both the Charleston and North Charleston police departments for racial bias. That was what had brought the thousands of women, men and children to Mount Moriah Missionary Baptist, not far from where Scott died. They were there to ask their respective mayors and city council members, directly, whether they would agree to an audit. The call and response that evening: “Too wrong! For too long!”

I was in the church that night, still a new resident of Charleston. My family and I moved to the city in the wake of two tragedies: Scott’s shooting and the massacre at Mother Emanuel African Methodist Episcopal Church, which took place mere months after Scott’s death. The city was still mourning both crimes when we arrived, its feelings raw. 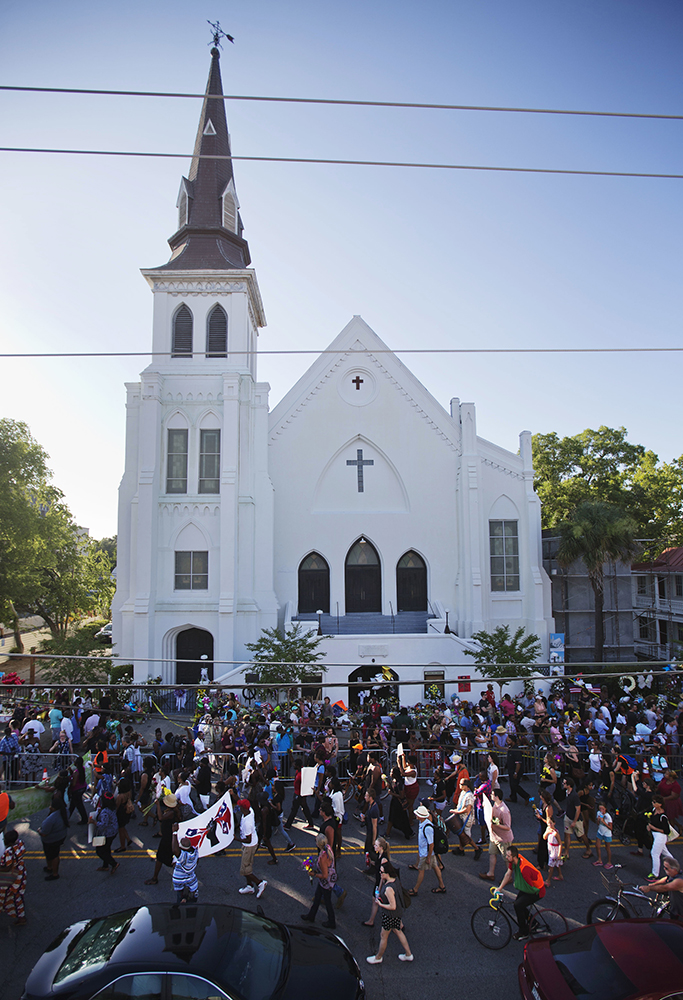 The two events weighed heavily on how we adapted to our new home and how, as a community member and a professor, I answer the question: What would it mean for our country’s religious communities to move beyond “the most segregated hour in America”?

You may recall Charlestonians of different religions and races walking across a major city bridge in the months after the Mother Emanuel shooting, hands joined in a “unity chain.” Less well publicized was the somewhat spontaneous assembly of black and white religious communities who gathered to grieve together in Morris Brown A.M.E. Church in the shooting’s aftermath. Together they may offer one model for moving beyond the racial segregation of American faith communities — a #CharlestonStrong show of empathy across the racial divide.

Yet, as I reflect on the question, my mind turns to another version of that aphorism typically attributed to Martin Luther King. Our current crisis seems better represented by what James Baldwin had to say on the subject in an interview with Dick Cavett in 1968. “I don’t know what most white people in this country feel,” the writer told Cavett. “I can only conclude what they feel from the state of their institutions. I don’t know if white Christians hate Negroes or not, but … I know, as Malcolm X once put it, that the most segregated hour in American life is high noon on Sunday!”

For Baldwin, violence against black people on the streets was a more pressing problem than potential togetherness in the pews. What was the value of moving beyond “the most segregated hour in America,” if that hour only reflected the segregation of our society writ-large? Baldwin called not for grand gestures or changed hearts, but for comprehensive institutional action.

CAJM is committed to doing just that. An affiliate of the Direct Action Research Training Center, the coalition of 30 Charleston congregations holds public officials accountable for making the area more just and equitable for all its residents. Its annual Nehemiah Action gathers members in the name of the Hebrew prophet who “held a Great Assembly to win justice for the people in Jerusalem who were being exploited by moneylenders.” Since its first action in 2013, its victories include the return of stolen wages for local workers; 280 preschool education slots that have served 1,800 at-risk children; and the institution of restorative justice practices in schools across the district.

On that night in April 2016, Charleston’s mayor resisted the demand for a qualified, independent audit, and the mayor of North Charleston, the city where Walter Scott lived and died, refused to attend at all. A year later, when CAJM held another meeting to hold them to account, neither mayor agreed to attend, and not a single white city council member from either city was willing to stand before those gathered. None would hear these black Charlestonians testify to their experiences of injustice. 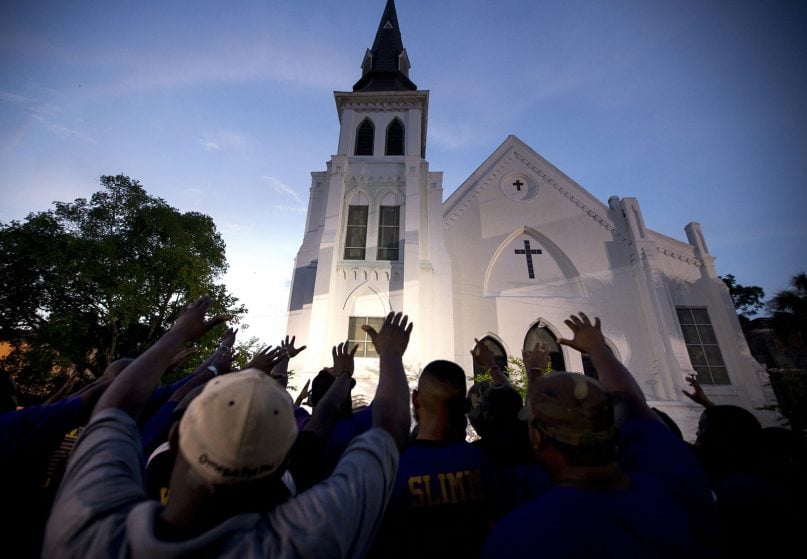 The men of Omega Psi Phi Fraternity Inc. lead a crowd of people in prayer outside the Emanuel AME Church on June 19, 2015, after a memorial in Charleston, S.C. (AP Photo/Stephen B. Morton)

That meeting was a potential breaking point for CAJM. Some members, especially white ones, were uncomfortable with how tense the confrontations with elected officials could get. Black leaders expected white congregations would begin to walk away, unwilling to engage in the kind of confrontation necessary to address an issue as deeply entrenched as policing practices.

But through the spring and summer of 2017, grassroots leaders — otherwise ordinary black and white Catholics, black and white Presbyterians, black Baptists and white Jews, Unitarians and Congregationalists — attended Charleston city council sessions. We filled seats and signed up for public comments. A turning point came when, spurred by the steady stream of constituent testimonies, black city council members shared their own stories of being stopped by police in the very city they served.

CAJM did not collapse. Instead, after a sustained struggle, the City of Charleston agreed to hire a qualified firm to audit their police force for racial bias. The final report, released by the independent auditor CNA in November 2019, found evidence of racial disparities in traffic stops and in use of force. CAJM continues to work with the city and its newly appointed police chief to implement new policies and practices.

North Charleston, on the other hand, has yet to agree to an audit. The Department of Justice’s Office of Community Oriented Policing Services reviewed the police force in 2015. But after the election of Donald Trump, Attorney General Jeff Sessions refused to release the report. It still sits in the DOJ.

Still, CAJM continues to grow its ministry across lines of religious and racial difference. This is what it means to move beyond the most segregated hour for CAJM: fighting for fairness day after day, month after month, year after year in the name of all of the prophets who stand against injustice.

Donate Now!
Posted in
Beyond the Most Segregated HourChristianityFaithIslamJudaismOpinion