WASHINGTON (RNS) — A human rights lawyer from India brought Muslims’ concerns about his country’s new citizenship law to a hearing on Capitol Hill.

“The fear among Muslims today is genuine,” testified Aman Wadud, who defends detainees in the northeastern state of Assam. “The fear of losing citizenship is genuine.”

Wadud spoke at a Wednesday (March 4) hearing of the bipartisan U.S. Commission on International Religious Freedom at the Russell Senate Office Building.

In December, the Parliament in majority-Hindu India passed a Citizenship Amendment Act that for the first time makes religion a criterion for citizenship. While the law gives Hindus and religious minorities from neighboring Afghanistan, Bangladesh and Pakistan a fast track to citizenship, it excludes Muslims. An estimated 190 million Muslims comprise just under 15% of India’s population. 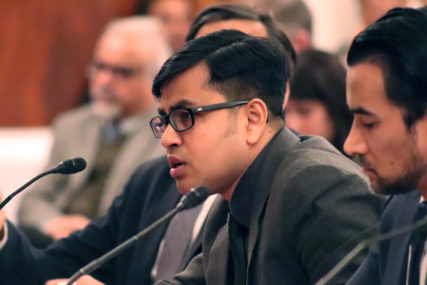 Aman Wadud speaks during a hearing of the U.S. Commission on International Religious Freedom at the Russell Senate Office Building on March 4, 2020, in Washington. RNS photo by Adelle M. Banks

Wadud said the recent protests in the capital city of Delhi — which erupted into violence that targeted Muslims and left dozens dead — are not only about the Citizenship Amendment Act, but also about plans for a National Population Register and a possible National Register of Citizens. Critics’ worries include the possible need to present documentation.

The hearing on citizenship laws and religious freedom was held within a week after President Donald Trump met in New Delhi with Indian Prime Minister Narendra Modi, during which time some of the violence took place. Several U.S. cities, most recently Albany, New York, have passed resolutions denouncing changes to the citizenship law by India’s far-right government.

Ashutosh Varshney, director of Brown University’s Center for Contemporary South Asia, testified that protests about the CAA since the enactment of the law in December have mostly been nonviolent. Though Muslims have predominated the protests, non-Muslims have participated in significant numbers.

Protesters view CAA as a departure from India’s Constitution — which includes sections on the rights to equality and to freedom of religion — that could leave many current Muslim citizens “stateless” and vulnerable if they lose basic rights.

“The threat is serious and implications quite horrendous,” Varshney said. “Something deeply injurious to the Muslim minority can happen once their citizenship rights are taken away.”

He said such a circumstance could lead to marginalization and “creates an enabling atmosphere for those who think they can act violently on behalf of the nation against the minorities.”

USCIRF Vice Chair Gayle Manchin posited that such action could “create another Holocaust” or lead to genocide.

“Yes, the threat of violence becomes so prevalent,” she said. Indian Muslims, left, offer prayers as activists of Bhim Army wait for the start of a protest against a new citizenship law, in New Delhi, on Jan. 17, 2020. Protests against India’s citizenship law that excludes Muslim immigrants continue in Indian cities in an unabating show of dissent against the Hindu nationalist government of Prime Minister Narendra Modi. The protest at a 17th century mosque, Jama Masjid, was led by Chandrashekhar Azad, leader of the Bhim Army, a political party of Dalits who represent Hinduism’s lowest caste. (AP Photo/Manish Swarup)

Commissioners of USCIRF, an independent agency, noted that citizenship has been revoked for religious minorities in countries ranging from Vietnam to Kenya. Two other panelists at the hearing highlighted the situation of Rohingya, an ethnic and religious minority with many refugees who have left Myanmar for neighboring Bangladesh after losing their citizenship rights.

Naomi Kikoler, director of the Simon-Skjodt Center for the Prevention of Genocide, recently returned from a visit to Cox’s Bazar, an area of Bangladesh where close to 1 million displaced Rohingya refugees are living.

“The most common refrain we heard from Rohingya refugees,” said Kikoler, whose center is at the U.S. Holocaust Memorial Museum, “was that they wanted their citizenship restored.”

Azeem Ibrahim, an expert on displacement and migration at the Center for Global Policy, said the mistreatment of Rohingya is being echoed in India.

“This pattern of using legal changes to mask religious discrimination and strip identifiable groups of citizenship is also a feature of Modi’s BJP government in India,” said Ibrahim, chair of the Rohingya Legal Forum.

USCIRF Chair Tony Perkins said in an interview after the hearing that he thinks it will take work by the international community to address the plight of the Rohingya, which he describes as “just quite frankly, a mess.”

He hoped the hearing’s attention on India might discourage other nations from following its example.

“By drawing attention to this, that this is unacceptable even within the legal framework of a country,” he said, “we’re sending a message to other countries that might be considering similar activity that this is not acceptable.” 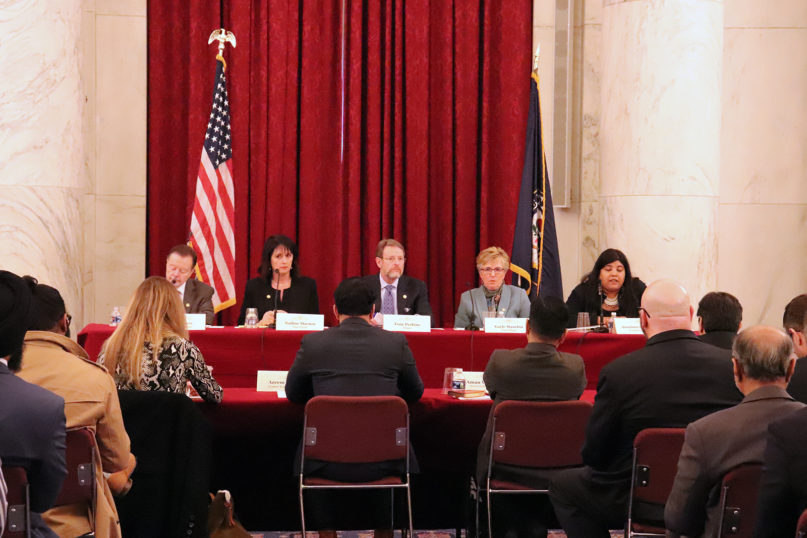 A hearing of the U.S. Commission on International Religious Freedom at the Russell Senate Office Building on March 4, 2020, in Washington. RNS photo by Adelle M. Banks