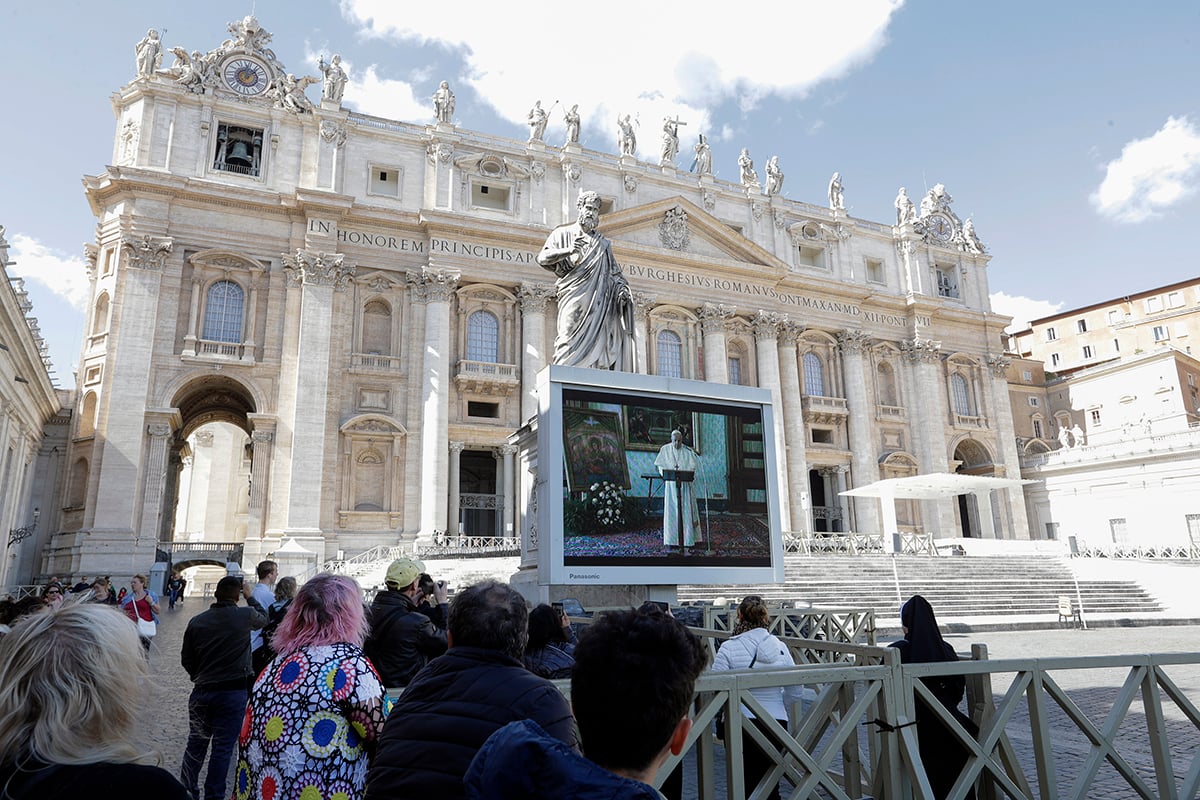 Faithful watch Pope Francis deliver the Angelus prayer on a giant screen to avoid crowds gathering, in St. Peter's Square, at the Vatican, Sunday, March 8, 2020. The pope in his streamed remarks said he was close in prayers to those suffering from the coronavirus and to those caring for them. (AP Photo/Andrew Medichini)
March 9, 2020
Claire Giangravé

VATICAN CITY (RNS) — It started as a handful of priests from northern Italy, but now even Pope Francis is celebrating mass alone before a livestreaming camera. Inside the Vatican walls, concerns about the coronavirus have become increasingly urgent.

On Sunday (March 8) 133 people in Italy died after contracting COVID-19, bringing the country's tally up to 366 of the 7,375 who tested positive for the virus. Italy is now second only to China for coronavirus deaths.

Prisoners in 27 detention facilities from Milan to Rome to Palermo initiated revolts during the weekend, asking for amnesty in light of the virus, burning mattresses and sieging the infirmaries. The Italian stock market has plummeted, continuing its weeklong decline.

The first case of coronavirus was also discovered within Vatican City. One employee has been quarantined after testing positive for the virus last week, creating a climate of anxiety within the walled city-state, which finds itself unprepared to address the outbreak.

“We are carrying on,” said Fabrizio Mastrofin, the communication officer at the Pontifical Academy for Life, speaking to Religion News Service on Monday (March 9) about life inside the Vatican during this epidemic.

According to the Vatican employee, the Vatican’s Health Care Fund (known by its Italian acronym FAS) “is not adequate to address these situations.”

The small entity, which normally caters to the basic health needs of Vatican employees and retirees, has been attempting to contain the virus by respecting the regulations mandated by the Italian state. Most Vatican employees can also utilize the Italian state healthcare, and Mastrofin said FAS recommends people displaying symptoms should visit nearby Italian hospitals.

“There is no emergency room” at the Vatican, he added, only “an emergency medical service.”

The Pontifical Academy for Life, the Vatican think tank charged with furthering research on questions regarding the protection of human life, has been at the center of fears concerning the coronavirus outbreak.

One participant at the conference held by the academy Feb. 26-28 on artificial intelligence later tested positive to the virus, spreading concerns that some of the other hundreds of participants may have also contracted the disease.

The patient, whose identity remains private, visited FAS for a routine check and was released after the test came out negative. The day after, the patient felt sick during the night and visited the Italian hospital Gemelli where he tested positive for the coronavirus.

Mastrofin said the Vatican was informed the patient had contracted COVID-19 before the patient himself was told.

“We are certainly afraid, especially those of us who were at the conference,” he said, adding that they were not instructed to cancel or postpone the event. He also said the prefect of the academy, Archbishop Vincenzo Paglia, 75, spent a lot of time with the person who later tested positive for the virus.

“The person who spent the most time with him was Paglia. They shook hands, ate lunch together and spent time talking alone,” he said, adding that “Paglia is feeling great” and shows no signs of the illness.

As in Italy, the virus is highlighting weaknesses in the Vatican’s health care system, especially in a city-state where the majority of citizens are seniors who frequently travel to every corner of the world. Even Francis, who in the past braved crowds and public squares despite the threat of terrorism or war, has been forced into isolation.

“They are trying to protect him,” Mastrofin said of the 83-year-old pontiff. News that Nicola Zingaretti, head of the Italian left-wing party, has coronavirus struck panic in the hearts of many Italians. If the pope were to fall ill, hysteria could follow.

Francis has reduced the number of functions he attends and taken to livestreaming his morning masses at Domus Sancta Martae, where he lives. His weekly general audience in St. Peter's Square now features large screens of the pope speaking — but to a nearly empty square. Bishops from France who visited the pope on Monday were made to sit roughly 3 feet apart.

The Vatican museums have been closed as of Sunday until April 3 in an attempt to prevent the spread of the virus. On the same day, the Vatican released Special Norms and Containment Norms instructing employees to avoid large crowds and elevators and to work from home as much as possible.

The documents, which together present about 30 guidelines to avoid contracting the virus and what to do in case of illness, was signed on Sunday (March 8) by Edgar Peña Parra, the substitute for the Vatican's Secretariat of State.

“Due to the highly diffusive nature of the epidemic we trust in the sense of responsibility of each of you in adopting all the measures afore mentioned and all other prevention measures presented by the competent Health Authorities for the protection of your own health and that of the entire working community,” the document stated.

September 3, 2020
Related Posts
By Yonat Shimron
The ‘chai’ charm that keeps this secretary of health grounded in the value of life
By Michele Chabin
Second coronavirus lockdown in Israel frustrates many religious Jews’ plans for High Holidays
By Adelle M. Banks
Churches report giving boost months after pandemic started
By Yonat Shimron
American Jews adapt the Seder for Rosh Hashana in a DIY pivot
By Jim Wallis
The 2020 election is a moment of truth for white Christianity